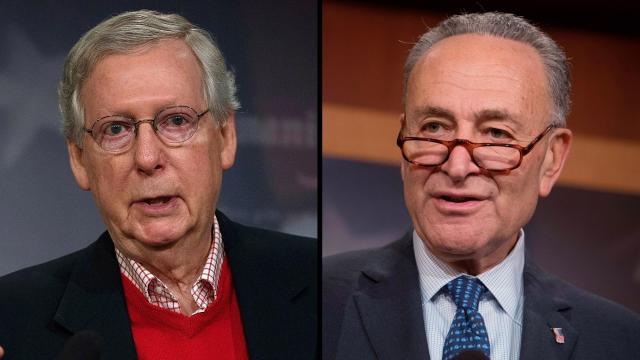 In a testy back-and-forth exchange on the Senate floor, Senate Democrats, including Senate Minority Leader Chuck Schumer, called for the Senate to take up legislation advanced by House Democrats to reopen shuttered parts of the federal government and argued that parts of the federal government not related to the border wall should be reopened immediately as negotiations continue over the border wall.

McConnell objected to the move, saying that "political stunts are not going to get us anywhere."

McConnell has made clear that he won't take up any legislation related to the shutdown in the Senate that President Donald Trump won't sign. And the President has dug in in his refusal to sign legislation that does not meet his demand for roughly $5 billion for a border wall, which Democrats refuse to provide.

"The last thing we need to do right now is trade pointless -- absolutely pointless -- show votes back and forth across the aisle," McConnell said on the floor.

The move by Senate Democrats to attempt to force a vote on spending bills amounted to an effort to put pressure on Senate Republicans amid the ongoing government shutdown and highlight the legislation passed by the new House Democratic majority to reopen government.

The House passed a legislative package last week that would end the shutdown and has started passing a series of bills this week that would open back up closed federal agencies, but the White House has issued veto threats for the legislation.

Schumer argued that Senate Republicans must take action even if the President remains entrenched in his position.

"Leader McConnell and Senate Republicans have a responsibility, not simply to wait for the President, but to intervene," Schumer said in remarks on the Senate floor.

Democrats continue to block other legislation

Later in the afternoon, the standoff between Democrats and Republicans over the shutdown continued to play out in the chamber when Senate Democrats -- for the second time this week -- blocked an effort to bring up a Middle East policy bill in protest over the lack of action to end the shutdown. The vote was 53-43.

That was the last scheduled vote of the week and many senators departed Washington for their home states.

Asked if it is inappropriate for the Senate to leave with the shutdown still unresolved, Democratic Sen. Joe Manchin of West Virginia replied, "It's hard. I've got people back home I'm going to go visit -- food banks and different government workers -- and try give them some reassurances we're doing everything we can. I'm ready to vote."

In remarks on the Senate floor earlier in the day, McConnell blamed Democrats for the continued impasse, saying that the shutdown has been "prolonged by my Democratic colleagues' refusal to even come to the table."

Prospects for any kind of a deal appear even dimmer after Trump declared on Wednesday that a meeting with Schumer and House Speaker Nancy Pelosi to discuss the shutdown was "a total waste of time."

There have been signs in the past week that cracks are emerging among Senate Republicans with several GOP senators saying that they would support ending the partial shutdown even without a border wall deal.

But the President still has a critical mass of congressional Republicans supporting him and McConnell has remained firm in saying he will only take up legislation to reopen government that the President backs.

After Trump stormed out of a White House meeting with congressional leaders, GOP senators privately gathered in Sen. Lindsey Graham's office on Wednesday to discuss a way out of the logjam. The long-shot idea: propose an immigration deal that would include $5.7 billion for Trump's border wall along with several provisions that could entice Democrats.

On Thursday morning, a group of Republican senators, many who met in Graham's office last night, gathered in McConnell's office. The group that convened included Sens. Lisa Murkowski of Alaska, Lamar Alexander of Tennessee, Thom Tillis of North Carolina, Richard Shelby, the chair of the Senate Appropriations Committee, Rob Portman of Ohio and Susan Collins of Maine.

The move seems to have stalled by Thursday afternoon. Graham appeared to acknowledge the effort's issues when he told CNN and other reporters, "I don't see a pathway forward," after several days of talks.

Other senators said they recognized that the only way out of the standoff is for Trump, Pelosi and Schumer to reach a deal that would be acceptable to them and that could pass the House and Senate and be signed into law.

"The President and Schumer and Pelosi are going to have to get together and say, 'this is what we agree on.' Otherwise, we can create a forum. It goes nowhere," said Sen. Richard Shelby, an Alabama Republican who chairs the Appropriations Committee and who sat in talks with the compromise group.

"You create a lot of noise. You create some optics, but ... do you create substance? I don't think so," he said about the Graham effort.

Despite the fact that any bills without Trump's request for wall funding are dead on arrival in the Senate for now, House Democrats plan to keep moving ahead with legislation to reopen government -- without new wall money.

Pelosi said on Thursday that House Democrats would continue to vote on spending bills next week to reopen shuttered parts of government.

Talking about Wednesday's meeting, Pelosi described Trump as "unpresidential" and accused his team of staging the event. "Not only was the President unpresidential -- surprise, surprise -- yesterday in his behavior, I think the meeting was a setup, so he could walk out, but I'll say just that."

"I don't even know that the President wants the wall, I think he just wants to debate on the wall," she added.