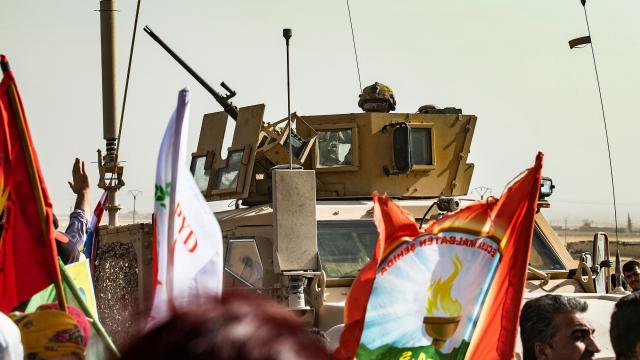 CNN — President Donald Trump on Monday defended his decision to pull US troops from northern Syria ahead of an impending Turkish invasion despite criticism from top Republicans including Senate Majority Leader Mitch McConnell.

The abrupt move, announced in a Sunday night statement from the White House press secretary following a call between Trump and Turkish President Recep Tayyip Erdogan, has prompted a rare show of bipartisan opposition to the Republican President. It has also left national security officials to try to explain another foreign policy about-face -- one that threatens the US-backed Kurdish forces in the region.

On Monday, Trump said he was "not siding with anybody" -- Kurdish forces or the Turkish government -- in his decision and reiterated an earlier warning to Turkey about potential economic devastation.

"I told Turkey if they do anything outside of what we think is humane ... they could suffer the wrath of an extremely decimated economy," the President said.

Trump also sought to downplay the seeming suddenness of his decision, saying he "consulted with everybody." A senior administration official said that he had discussed the issues "with his senior advisers in the defense, diplomatic and folks, staff here at the White House." Two defense officials told CNN that neither Defense Secretary Mark Esper or Chairman of the Joint Chiefs of Staff Gen. Mark Milley were blindsided by the President's decision over the weekend to pull the troops back. Both officials said there were multiple phone calls with top national security officials over the weekend discussing the matter. However, neither official knew specifically how far ahead of the decision Esper and Milley were notified.

Trump faced a barrage of criticism from within his own party, including McConnell, Sen. Lindsey Graham and former US Ambassador to the UN Nikki Haley about the decision.

Trump said on Monday afternoon, "I have great respect for all the people that you named. They have their opinion and a lot of people do and I could also name many more than you just named of people that are totally supportive."

McConnell on Monday urged Trump to reverse his move, saying "a precipitous withdrawal of US forces from Syria would only benefit Russia, Iran, and the Assad regime."

"I urge the President to exercise American leadership to keep together our multinational coalition to defeat ISIS and prevent significant conflict between our NATO ally Turkey and our local Syrian counterterrorism partners," the Kentucky Senator said. "Major new conflict between Turkey and our partners in Syria would seriously risk damaging Turkey's ties to the United States and causing greater isolation for Turkey on the world stage.

"As we learned the hard way during the Obama Administration, American interests are best served by American leadership, not by retreat or withdrawal," he added.

Other Republican allies of the President, including Rep. Liz Cheney, the No. 3 House Republican, objected to Trump's decision.

"Pulling out of northern Syria ignores that painful lesson, represents an abandonment of our Kurdish allies despite their vital contributions to the fight against ISIS, emboldens Iran, and serves as an undeserved gift to the Erdogan regime, which has only continued its steady march toward Moscow," said Cheney.

The comments from Republicans are particularly noteworthy given the party's reluctance to oppose the President on other issues. When contacted by CNN in recent days, less than a handful of Republican lawmaker's offices expressed concerns over Trump's public call for foreign governments to investigate former Vice President Joe Biden and his son, Hunter.

A few Republicans have praised the move -- including Sen. Rand Paul of Kentucky.

"I stand with @realDonaldTrump today as he once again fulfills his promises to stop our endless wars and have a true America First foreign policy," Paul tweeted.

Numerous Democrats also expressed their misgivings about Trump's decision on Syria. Speaker of the House Nancy Pelosi called the move "a deeply disturbing development that betrays our Kurdish allies who have been instrumental partners in our mission to eradicate ISIS."

America 'would not support this operation in any way, shape or form'

As lawmakers on both sides of the aisle denounced the move to pull back troops from the Turkish-northern Syrian border, US officials sought to emphasize that the US does not support a potential Turkish incursion into Syria.

"The Department of Defense made clear to Turkey - as did the President - that we do not endorse a Turkish operation in Northern Syria. The U.S. Armed Forces will not support, or be involved in any such operation," Assistant to the Secretary of Defense for Public Affairs, Jonathan Hoffman said in a statement Monday.

A senior State Department official who was briefed on the Trump-Erdogan call said the US President made "very clear" that America "would not support this operation in any way, shape or form."

That official suggested that Erdogan had been counting on US support, and that if Turkey moves forward into Syria, they would be doing it totally alone.

"If the Turks really want to go in and do this without our support, then they have to do all of it. They have to do things like deal with the (foreign terrorist fighters), which we have been doing; it has not been easy. They will have to, if they go far enough south, deal with the al-Hol camp, deal with all these other problems, deal with the Daesh problem," they said.

The official said that the US policy in support of its Kurdish allies had not changed, despite the move that could by the US that could leave those allies vulnerable to Turkish attacks.

"We have people out there who are working directly with both military and our people from the State Department with the Kurds right now," the official told reporters Monday. "They are obviously extremely disappointed with this."

Mustafa Bali, the spokesperson for the Kurdish-led Syrian Democratic Forces (SDF), told CNN Monday that they had tried to cooperate on a safe zone mechanism, but those efforts had been betrayed.

"We tried to apply everything, we pulled out our troops, we destroyed our tunnels but unfortunately the United States did not keep their promises," Bali said.

The senior State Department official said that the implementation of the safe zone had been suspended.

Officials also downplayed the impact of the removal of US forces on the stability of the situation.

"I think the United States has made its position on this issue clear, but the President's first priority and first obligation if the Turks are going to move in is to ensure the safety of our troops in the area and those 50 troops will be redeployed within Syria to a place where they're not in danger of being caught in a crossfire," a senior administration official told reporters on Monday.

"For anyone to characterize the fact that the President is taking care to make sure our soldiers, sailors, airmen and Marines are safe as somehow being a greenlight for a massacre is irresponsible and doesn't comport with the reality of the situation," the official added.

That official also noted that given that Turkey is a NATO ally with "a big military," the US "is not in a position to and will not be in a position to fight Turkey with any actions that it takes with respect to Syria."

However, a Department of Defense official said the approved Pentagon plan had always been that US troops would not move back from the border until the Turks began military operations inside Syria -- an occurrence that had not happened when Trump made the announcement.

And although the White House statement noted that "Turkey will soon be moving forward with its long-planned operation into Northern Syria," the State Department official emphasized the fact that the Turkish operation had not yet commenced.

"We knew that they had the military capability to do it, but we have seen this, frankly, for the past year and a half," the official said. "So there was no specific indication that this time (Erdogan) would push the button and we still don't know, in the end, what he's going to do."