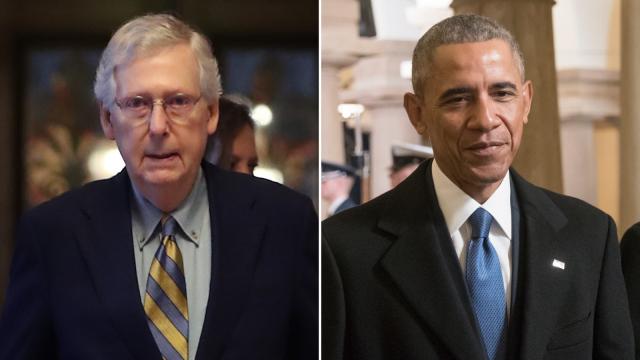 CNN — Senate Majority Leader Mitch McConnell conceded Thursday night that he was wrong to claim that the Obama administration had not left behind a plan to deal with a pandemic in the US.

"I was wrong. They did leave behind a plan, so I clearly made a mistake in that regard," McConnell said during an interview with Fox News' Bret Baier.

The concession comes days after he falsely accused the Obama administration of failing to leave the Trump administration "any kind of game plan" for something like the coronavirus pandemic during a Trump campaign online chat with Lara Trump, the President's daughter-in-law.

"They claim pandemics only happen once every hundred years but what if that's no longer true? We want to be early, ready for the next one, because clearly the Obama administration did not leave to this administration any kind of game plan for something like this," McConnell had said Monday.

In reality, former President Barrack Obama's White House National Security Council left the Trump administration a detailed document on how to respond to a pandemic.

The document, whose existence was publicly revealed by Politico in March, is called the Playbook for Early Response to High-Consequence Emerging Infectious Disease Threats and Biological Incidents.

The playbook contains step-by-step advice on questions to ask, decisions to make and which federal agencies are responsible for what. It includes sample documents that officials could use for inter-agency meetings. And it explicitly lists novel coronaviruses as one of the kinds of pathogens that could require a major response.

Last week, Obama described the Trump administration's coronavirus response as "an absolute chaotic disaster" during a private call with people who worked for him in the White House.

Still, McConnell added Thursday that "as to whether or not the plan was followed and who's the critic and all the rest, I don't have any observation about that because I don't know enough about the details of that to comment on it in any detail."