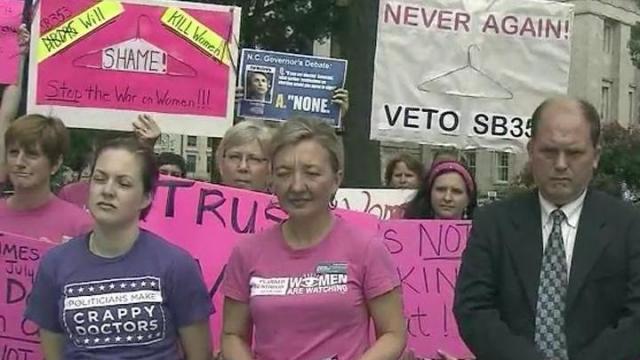 Raleigh, N.C. — Petitions containing more than 35,000 signatures were dropped off at the State Capitol Thursday afternoon, calling on Gov. Pat McCrory to veto any abortion-related legislation that comes to his desk in the coming days.

"Gov. McCrory, trust is an important part of being a leader," the petitions state. "You promised you wouldn't sign any bill that would restrict a woman's right to choose. Keep your word and veto any legislation that would restrict women's reproductive rights."

During a campaign debate last fall, McCrory said he wouldn't endorse any new restrictions on abortion. Yet, he has backed a bill the House passed two weeks ago that calls for added regulations on abortion clinics.

"It's a breach of his campaign promise. He was very clear he wouldn't support any more restrictions on abortion care in North Carolina," said Suzanne Buckley, executive director of NARAL Pro-Choice North Carolina.

It was unclear whether McCrory saw the petitions. A spokesman said the governor was in meetings all day.

McCrory and bill supporters say the regulations, which would require clinics to meet the same standards as outpatient surgery centers and require a physician to be present for all procedures, are designed to improve the health and safety of women.

"This bill does not restrict access. It simply raises the health and safety standards for women," said Rep. Ruth Samuelson, R-Mecklenburg.

Republican lawmakers say the changes are needed, but abortion rights advocates contend that they would force all but one abortion clinic statewide to shut down because of the extensive renovations they would require.

Chapel Hill Mayor Mark Kleinschmidt and dozens of other city and county officials in North Carolina who signed the petition say the argument of trying to improve women's safety rings false, noting the bill also prohibits them from offering abortion coverage to their employees, except in cases of rape or incest or if the mother's life is endangered.

"There's a lot of people who do not feel like the government should be paying for abortions," Samuelson said. "They still want abortion legal and they still want it safe, which is the rest of the bill, but they don't feel like taxpayers should have to pay for it."