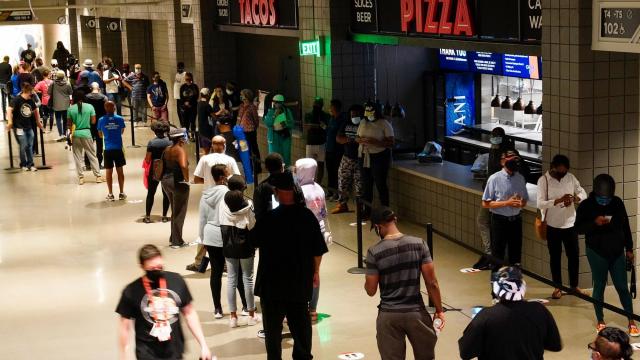 CNN — A technical glitch at a voting supersite, hours-long lines, and a last-minute court ruling marked the start of in-person early voting in Georgia, a presidential battleground for the first time in decades that will also play a huge role in deciding which party controls the Senate.

Georgia voters have been returning mail-in ballots for weeks already, but Monday was the first day that the state offered in-person voting opportunities. There were some early hiccups reported, including glitches that slowed down voting at one supersite in Atlanta. Elsewhere, early voters endured long lines, sometimes snaking around buildings, according to local reports.

According to the Georgia Secretary of State, 126,876 Peach State voters cast their ballot on Monday, a record for the first day of early voting.

Democratic nominee Joe Biden hopes to peel the Peach State away from President Donald Trump, who won by five percentage points in 2016. There are also not one but two Senate races on the ballot in Georgia, with two incumbent Republicans trying to fend off challengers.

After several weeks of mail-in voting, more than 425,000 ballots have already been cast in Georgia, according to data from Catalist, a company that provides data, analytics and other services to Democrats, academics and nonprofit organizations. More than 1.5 million Georgians have requested ballots so far, shattering records form past years, amid the Covid-19 pandemic.

"Georgia is seeing record turnout for early voting because of excitement and enthusiasm of the upcoming election," said Walter Jones, a spokesperson for the Georgia Secretary of State's office. "Long lines are to be expected -- voters need to be aware of all of their options including three weeks of early voting, no-excuse absentee and in-person voting day of the election."

There were images of extremely long lines across the state of Georgia. Footage went viral on social media of voters lined up in Suwanee, a suburb of Atlanta, leading some Democrats to raise allegations of "voter suppression." CNN affiliate WTVM reported that hundreds of early voters were wrapped around a polling place in Columbus, a city near the border with Alabama.

Early voting at the State Farm Arena in Atlanta was delayed for about an hour after a technical problem with the electronic pollbooks that were are being used to check-in voters. The glitch compounded the already long lines.

The arena is home to the NBA's Atlanta Hawks. Steve Koonin, President and CEO of the Atlanta Hawks and the State Farm Arena, told CNN, "I am very upset that we were put into this position, that's why we required people on site and I'm glad to say it got resolved quickly."

"The cards were being rejected by the machine when a few voters put their cards in, and they were rejected," he said, referring to the verification of voters' identities before they cast ballots.

The problems were fixed after about an hour. Multiple voters told CNN that the glitch caused their cards to be rejected, but they were able to vote properly after the machines were rebooted.

"There was some issue with whatever database that was on the poll pads at this site," said Richard Barron, the elections director in Fulton County, which includes most of Atlanta.

Barron said he did not know what caused the issue. "We re-imported the database and now it's working," he said.

Like many other sports complexes across the country, the State Farm Arena is being used as a voting supersite to accommodate large numbers of voters in the city of Atlanta, which is home to about 500,000 people. Social distancing is being enforced to protect voters from coronavirus.

Problems with electronic pollbooks were among the factors that contributed to the long lines many Georgia voters experienced during June's troubled primary election, along with pandemic protocols resulting in a shortage of poll workers, consolidated polling places and other issues.

Court ruling on eve of voting

A federal judge in Georgia ruled Sunday that the state should continue using voting machines known as ballot-marking deices, denying a request to require hand-marked paper ballots for all votes. A ballot-marking device is a type of voting machine where voters use a touchscreen to pick their candidates, and the machine then records those selections on a separate paper ballot.

In a 147-page opinion, federal Judge Amy Totenberg said that while there were some real flaws with the ballot-marking devices, it was too close to the beginning of in-person early voting for her to order such a sweeping change to the election system. The suit was brought by election integrity activists who said the only way for a safe election was to have voters mark ballots.

"Despite the profound issues raised by the Plaintiffs, the Court cannot jump off the legal edge and potentially trigger major disruption in the legally established state primary process governing the conduct of elections based on a preliminary evidentiary record," Totenberg wrote.

Georgia Secretary of State Brad Raffensperger, a Republican, defended the state's voting systems in court, and provided testimony from election officials who said they would struggle to comply with any legal order requiring hand-marked ballots for all voters on such short notice.

"It's a nuanced opinion, and I'm glad she didn't throw this election into chaos," said CNN analyst Jessica Huseman, who also covers voting rights and election administration for ProPublica.

The court case has been ongoing since 2017 and will continue beyond the 2020 election.

According to Catalist data, Georgia voters more than doubled their pre-Election Day voting, including mail-in ballots, compared to this time in 2016 -- a trend happening in many states because of the pandemic.

Additionally, Black voters have currently cast a greater share of pre-Election Day votes in Georgia this cycle compared to this point in 2016. They currently represent more than 35% of those early ballots, up from 29% four years ago. White voters have cast a smaller share of ballots ahead of the election, dropping from 68% in 2016 to 58% currently in the Peach State.

Polling from CNN and other outlets indicates that Biden voters are much more likely than Trump voters to vote-by-mail or vote early. Trump voters have consistently shown a strong preference for in-person voting on Election Day, likely taking their cues from the President, who has spent months attacking mail-in voting and encouraging people to vote in-person, despite health risks.