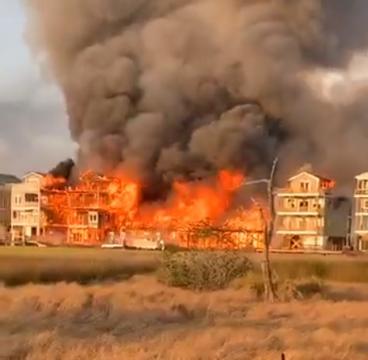 It was not immediately clear if anyone was hurt in the blaze, which was reported about 6 p.m. at the development on Atkinson Road near South Shore Drive. Firefighters from Topsail Fire, North Topsail Fire and Pender County were called in to help bring the blaze under control.

Authorities warned people to avoid the area until the blaze had been extinguished.

A huge plume of smoke was visible for miles and video from the scene showed heavy flames consuming one of the buildings.

Surf City authorities said the blaze had spread to at least seven buildings.

The cause of the fire was pending.

Lisa Matthews, a realtor for the area, said the houses are single-family homes, and one of them was still under construction when the fire occurred.

Atkinson is a one-way street on a strip of narrow land, and several families had to evacuate the area by boat.