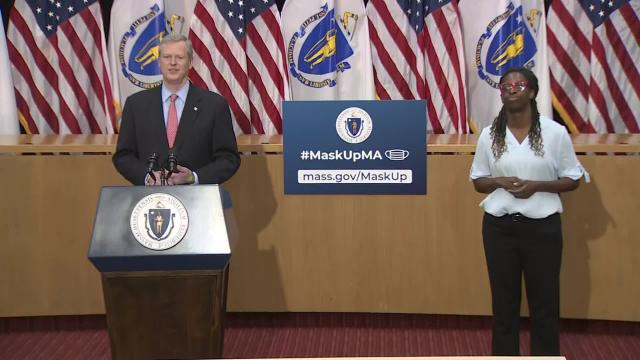 Baker, who emphasized his work campaigning for fellow Republicans as he's "been a Republican for 40 years," called the President's claims of voter fraud "baseless."

"But this latest move to employ the Department of Justice in all of this is so wildly inappropriate and stalling an orderly transition process especially at a time like this is equally unacceptable," he said, adding, "I can't think of a worse time to stall a transition than amid a deadly pandemic that the federal government continues to own primary responsibility for responding to."

Hogan, a moderate Republican speculated to be considering a 2024 presidential bid, called what is happening "really dangerous."

"In the middle of this pandemic, this economic collapse, people dying across the country, to not know if we're going to have a transition," he lamented during a Tuesday news conference.

"There's no transition, and how long is this going to go on?" he continued. "With no stimulus package getting done with, with no additional virus relief with, you know, it's crazy. We've got to move on."

The comments from both governors come as the administration has so far refused to sign off on a key document needed to formally begin President-elect Joe Biden's transition process while Trump continues to baselessly claim election fraud and refuses to concede the race. As of Tuesday, the nation has seen over 10.2 million cases of, and 239,300 deaths from, the coronavirus, according to data from Johns Hopkins University.

Both men, who each congratulated Biden on his projected victory, had opted not to back Trump in the presidential election.

Baker has long made clear that he doesn't ideologically align with the President, with his communications director saying in October that the governor wasn't backing Trump's reelection bid. In March, Baker declined to tell the State House News Service whom he had voted for in the state's Republican primary, but he said he didn't vote for Trump. The governor had previously said he didn't vote for Trump in 2016.

Hogan didn't commit to voting for Trump when asked by radio host Hugh Hewitt in July, saying that he would decide who to vote for by Election Day after having written in his father during the 2016 election. He told the Washington Post in October that he wrote in Ronald Reagan for president when he cast his 2020 ballot, saying, "I thought it was important to just cast a vote that showed the kind of person I'd like to see in office."

The two governors have also been critical of Trump on other key issues.

Baker slammed the President's "bitterness, combativeness and self-interest" in the wake of nationwide protests following the police killing of George Floyd.

In September, Baker urged Trump and the Senate "to allow the American people to cast their ballots for president before a new justice is nominated or confirmed" following the death of Supreme Court Justice Ruth Bader Ginsburg. Days later, he slammed the notion of staying in office after losing an election after Trump would not commit to facilitating a peaceful transition of power.

The pandemic has exacerbated tensions between Trump and Hogan.

This story and headline have been updated to include comments from Maryland GOP Gov. Larry Hogan.