Three Dead, Including the Gunman, in Shooting at Florida Gaming Tournament 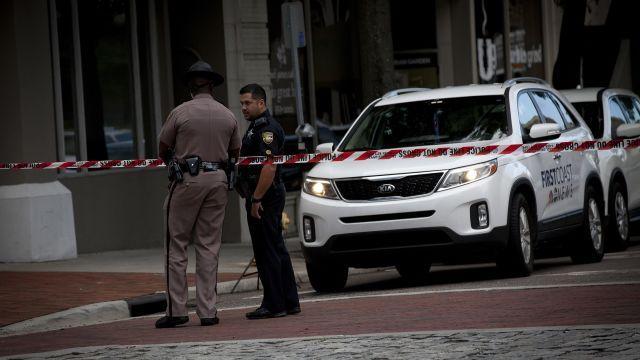 JACKSONVILLE, Fla. — A man armed with a handgun killed two people at a video gaming tournament Sunday, turning a football competition waged in a virtual domain into the chaotic scene of a double murder. The shooting suspect, a gamer attending the event, then fatally shot himself, authorities said.

Sheriff Mike Williams of Jacksonville identified the suspect as David Katz, 24, of Baltimore, but said it was too early to know his motive. The sheriff said the FBI and the Bureau of Alcohol, Tobacco, Firearms and Explosives were assisting in the investigation.

A livestream of the tournament caught the chilling moment when the shooting began. A red laser dot appeared on the chest of one of the players, who was wearing white headphones and a red sweatshirt. The video of the players then disappeared. Twelve gunshots rang out.

The shooting took place at 1:34 p.m. at Jacksonville Landing, a riverfront collection of restaurants, shops and an open-air performance space that is a gathering place in the city on weekends. President Donald Trump held a packed rally there as a candidate in 2015. By late Sunday, it was surrounded by fire trucks and police vehicles, its perimeter roped off by police tape. SWAT team officers stood at the entrance of a nearby parking garage. A helicopter flew high overhead.

“We have faced an occurrence that is all too common,” Mayor Lenny Curry told reporters Sunday night. “Tonight, we pray for the wounded and we pray for the families of those who were lost.”

“We have got to change, we’ve got to really stop and say to ourselves, ‘There’s something wrong,'” said Scott, who signed gun-control legislation into law after the Feb. 14 rampage at a high school in Parkland, Florida, that left 17 people dead. “Why are young men willing to give up their lives? Or why don’t they value somebody else’s life? We’ve got to figure this out. We don’t ever want this to happen again.”

But Scott is due to leave office within months — he is running for a seat in the U.S. Senate — and Sunday night, he made no specific policy proposals. As he walked to his motorcade, stopping for a picture with a hospital employee, he ignored reporters who called out more questions about gun control.

Jacksonville was already reeling from another deadly shooting over the weekend. One person was killed and two others were injured in a shooting after a high school football game Friday. Curry blamed that violence on youth gangs.

The violence rattled locals and visitors and rippled through the state’s political establishment. Florida’s primary election is Tuesday; five Democrats running for governor decried the violence and reiterated their push for gun control. The two Republican candidates canceled planned campaign events in the Jacksonville area.

“How long is it going to take for us to get guns off the street?” Marquis Williams, 28, told local reporters after his girlfriend was treated for an ankle injury. “How many more people, how many more friends, do we have to lose — die — to this?”

Williams and his girlfriend, Taylor Poindexter, 26, had come to the tournament from Chicago. They wore Bears jerseys and had been at the bar preparing to order a pizza at Chicago Pizza and Sports Grille, which shares an entrance with the space hosting the gaming tournament in Jacksonville Landing, when the shooting began.

“We heard a first pop, thought it was a balloon,” Williams told The Florida Times-Union. “And then we heard multiple pops. Took off running.”

Poindexter said she was trampled on the way out.

“Never did I once think, ‘Oh, we’re going to be part of a mass shooting and I’m on crutches just playing video games,'” she said. “It’s crazy.”

Sujeil Lopez was at home in the Tampa Bay area when she got a call that her 25-year-old son, who plays video games professionally, had been shot.

“I have to get to him. I am four hours away from him and I have to get to my son,” Lopez said in a telephone interview. “He was shot three times, once on the nipple, once on his hand and somewhere else.” She did not know his condition.

A professional video game organization, compLexity Gaming, said on Twitter that it had a player at the tournament who “suffered a small injury” when a bullet grazed his hand but that “he is away from the scene.”

The player, Drini Gjoka, wrote on Twitter that the “tourney just got shot up.”

“I am literally so lucky,” he said. “The bullet hit my thumb.” In another Twitter post, he said he would “never take anything for granted ever again.”

People ran in panic from the restaurant, and at least two people were injured while fleeing, police said.

“The look on everybody’s face was like they were terrified,” witness Javari Long told the local Fox affiliate, noting the presence of families and “babies” at the pizza joint next to the gaming tournament. “It’s games.”

After Sunday’s shooting, Memorial Hospital in Jacksonville treated three patients, all of whom were in stable condition, a spokesman, Peter Moberg, said. Another hospital, UF Health Jacksonville, was treating six patients, one of them in serious condition and five in good condition, said the hospital’s spokesman, Dan Leveton.

Doctors at UF Health Jacksonville told reporters that the most seriously injured of the patients there had been shot in the chest but was expected to survive. Three patients were shot once; the others were shot more than once, said Dr. Marie Crandall, a trauma surgeon. The patients range in age from 20 to 35.

In Baltimore, federal officials were investigating in HarborView, an affluent condo and town house community just south of the Inner Harbor area. Several agents from the ATF emerged from a town house there Sunday night and declined to comment.

Cameron Stearns, who lives next door to the town house where he said Katz lived with family, said he was surprised and horrified at the news that Katz had been identified as the gunman. “It’s shocking and scary to think only a wall separates you from somebody capable of shooting up a video game tournament,” he said. The shooting happened at the GLHF Game Bar, which is short for “Good Luck Have Fun.” The venue inside the pizza restaurant was hosting a tournament that viewers could watch on Twitch, a gaming network owned by Amazon. Spectators watch the games, many hoping to pick up skills and tips from more experienced gamers.

The bar was scheduled to host a qualifying round for the Madden NFL Championship Series, a gaming tournament. “Madden NFL 19,” developed by Electronic Arts, is the 30th installment of the popular NFL video game series, which has sold more than 100 million copies. Its release each summer — just before the start of the football season — is practically a holiday for many NFL and video game fans.

The shooting took place at the southeast regional qualifying contest for a Madden tournament. It advertised a $5,000 grand prize, and the top two finishers were to receive a berth in the finals in October.

In a video clip shared on social media, the game could be seen on a television screen. Someone playing as the Atlanta Falcons appeared to have scored, and was kicking off. Commentators remarked that the players were so good that it would not be easy to knock anyone out of the tournament.

Then the sound of gunfire began. Several shots could be heard, one after another.

Then as the shots sounded, commenters repeatedly said, “Oh my God.”

“Is there a shooting?” a viewer asked.

The video then cut off.