Maryland argues Rosenstein, not Whitaker, should be acting attorney general 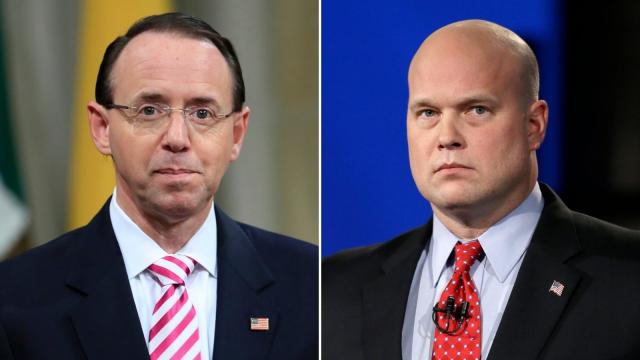 Brian Frosh argues Whitaker was not properly appointed and his appointment violates the Attorney General Succession Act in addition to the Appointments Clause of the Constitution.

His court challenge seeks a preliminary injunction that would stop the Justice Department from proceeding in defending a lawsuit involving the Affordable Care Act unless Rosenstein replaces Whitaker.

Maryland, along with more than a dozen other states, are seeking rulings that the Affordable Care Act remains enforceable despite the Trump administration's efforts to dismantle it.

Since Maryland's lawsuit named former Attorney General Jeff Sessions as a defendant, the state now says the judge overseeing the lawsuit should declare that the proper defendant as attorney general is Rosenstein, not Whitaker.

"It is troubling, to say the least, that the President is attempting to fill a 'vacancy' he created himself with a 'temporary' appointment that might last for many months or years," the motion said.

The Justice Department is expected to release an Office of Legal Counsel opinion Tuesday detailing their legal theory behind the legality of Whitaker's appointment.