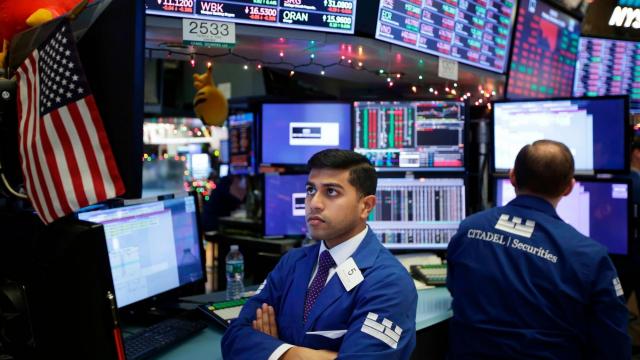 The day marked the biggest percentage gain for all three indices since March 2009.

"Investors went bargain shopping the day after Christmas, where stocks just got too cheap relative to earnings, future earnings, any reasonable assessment of earnings," said Chris Rupkey, managing director of MUFG. "The coast is clear, back up the truck, investors are saying enough already, the world is not ending."

Stocks rose higher despite virtually no news -- which may have been a catalyst in its own right. Thin trading and a lack of big news often send stocks higher in the last week of December.

President Donald Trump did not tweet until late in market hours Wednesday. Shortly after 2 pm ET, the White House announced Trump and the first lady traveled to Iraq on Wednesday. Recently, Trump has unsettled markets by signaling the potential firing of Federal Reserve Chairman Jerome Powell and a trade war escalation.

All but one stock in the S&P 500 rose Wednesday. Newmont Mining Corp (NEM), which fell 0.1%, was the sole loser. Newmont was the S&P 500's biggest gainer on Monday after gold prices rose.

Even shares of department store JCPenney (JCP), which dipped below $1 for the first time, ended higher on the day. And Ford (F) stock, which hit a nine-year low earlier in the day, ended slightly higher.

One good day isn't a trend

Wednesday was a respite from a very rough month for investors.

Even after Wednesday's rally, the S&P 500 remains close to entering a bear market, which would end the longest bull market in history.

After markets tanked on Christmas Eve, Trump said Tuesday that he remains confident in Mnuchin, but he renewed his criticism of the Fed, accusing it of hiking rates too fast.

Those doubts come of top of worries about how sharply the US economy might lose steam next year.

The only certain thing about the market this month is uncertainty. The slightest bit of bad news can turn a rally into a rout.

European markets were closed Wednesday. In Asia, Japan's Nikkei swung between gains and losses before closing nearly 1% higher. The shaky trading followed a 5% plunge on Christmas Day that dragged the Japanese index into a bear market. In China, the Shanghai Composite shed 0.3% on Wednesday.

Markets have been rattled in recent days by fears of slowing economic growth, exacerbated by some unsettling moves from Washington.

The turmoil in Washington is making traders in other countries fret about the stewardship of the world's biggest economy.

Global investors have a laundry list of worries, including China's slowing economy, the Trump administration's trade war with China and the unpredictability surrounding Brexit.

"There's a lot of uncertainty, and that's one of the biggest things that the market doesn't like," Andrew Sullivan, a Hong Kong-based market economist, told CNN.