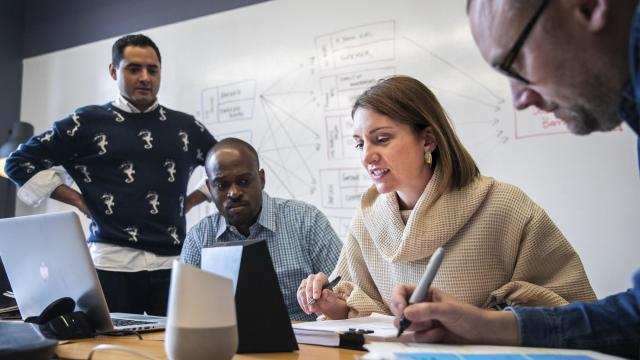 Heading into last year’s holidays, marketers at HBO were eagerly experimenting with how to use technology like augmented reality and virtual reality to promote their shows. But then, celebrating with their families across the country, they watched as everyone from kids to elderly aunts unwrapped smart speakers from Google and Amazon and started barking orders.

When they got back to work, the marketers had a new priority: Figure out how HBO, whose product lives on screens, could create a space for itself in the world of voice.

“We saw, partly because Amazon discounted the devices so deeply, that they exploded,” said Sabrina Caluori, HBO’s senior vice president of digital and social marketing. “Very quickly, we realized that we really needed to dig in.”

Google Home and Amazon Echo speakers do not run paid advertising, so brands have approached the devices in two ways. Some are trying to crack the code on search results and make sure that their products are mentioned first when users say they want to buy a specific item. Others are creating games that entertain people or tools that provide some sort of service (like directions for how to get a wine stain out of clothes) in order to build loyalty or name recognition.

The devices are still largely used for simple tasks, like checking the weather or listening to the news. But marketers want to be ready for the future, particularly as the voice assistants that power speakers are built into products like appliances and TVs.

HBO has created applications — known as “skills” on the Amazon Echo devices — to promote its shows and characters. This year, it introduced Westworld: The Maze, a choose-your-own-adventure-style game for superfans of “Westworld.” (A dramatic trailer for the game ends with a narrator intoning, “Alexa — open Westworld.”) More recently, it introduced a skill starring characters from its new show from Sesame Workshop, “Esme & Roy,” in which children can use the speaker to answer questions and play along. Both games can be played without the aid of screens.

Unilever has created a recipes skill under its Hellmann’s label, while Procter & Gamble has introduced features from Tide and Oral-B. Those using the Tide application can ask Alexa how to remove juice or grass stains from clothing, while Oral-B’s offers a tooth-brushing timer.

On Google Home, where the term “skills” is replaced by “actions,” Estée Lauder has one for personalized beauty advice and Disney has some games for children.

Marketers have been rushing to figure out where their brands fit in a world populated by voice assistants and smart speakers. While questions remain about privacy and security, data from comScore in October showed that more than 20 million homes in the United States, or 22 percent of those with Wi-Fi, use the devices. By 2022, more than half of American homes will have a smart speaker, according to Juniper Research.

“We’ve hit the point where the majority of our clients are now asking us for help with a voice strategy,” said Abbey Klaassen, president in New York of the agency 360i, which works with HBO. “It’s gone from an interesting kind of experiment to something they have recognized that they need to invest in to make sure they are discoverable and relevant in the next five years.”

Amazon said on a recent earnings call that it had no plans to add paid advertising to Alexa. Google promoted the live-action movie “Beauty and the Beast” on Google Home last year. But the company claimed to The Verge that that was part of its “My Day” feature in which it summarizes the events of the coming day and not an ad, and that the devices did not run paid ads. A spokesman declined to comment on whether ads might be sold on the devices in the future. But both Amazon and Google have been willing to work with ad agencies and marketers to help them develop applications for smart speakers.

“They have a vested interest in making sure brands are creating quality voice experiences and not a lot that will drive people crazy,” Klaassen said.

Often, this form of marketing isn’t an effort to sell items directly. Penguin Random House recently made a skill featuring astronaut Tim Peake, who co-wrote a new book, “The Astronaut Selection Test Book.” The feature is narrated by Peake and includes puzzles from the European Space Agency. The publisher also recently unveiled a skill that delivers inspirational quotes from titles by authors like Mindy Kaling and Elizabeth Gilbert.

“We’re used to thinking about the elements of the book that we make available for people to sample to get a sense of it,” said Rebecca Ikin, a marketing director at Cornerstone, a division of the publisher. “This is taking that principle and applying it to smart speakers.”

Like HBO, Ikin said her team had explored the idea after seeing the boom in interest in the devices last holiday season.

Caluori of HBO said creating the applications could be complex and time intensive, noting that more than 100 people worked on the “Westworld” skill, which was made for a niche audience. But she said less help from outside partners was likely to be needed in the future as the work became an “ongoing evergreen capability.”

“We feel like this voice-based interaction is not going away,” Caluori said. “It’s starting with speakers, but it’ll very quickly be TVs and cars and all these other places.” The “Esme & Roy” skill, which was created with Sesame Workshop, showed the potential for smart speakers with children and their parents. Amazon has been seeking child-friendly voice applications, particularly now that it sells an Echo device meant for children, Caluori said. At the same time, she said, young parents such as herself are keen on smart speakers, partly because they’re a screen-free alternative to tablets and phones.

Once the game is opened, children can use the speaker to play along with the show’s two main characters. They can answer questions to “travel” to places like space or underwater, and can jump around while listening to its cues.

HBO and Sesame Workshop also wanted to offer something useful for parents, so they included a song from the show that encourages children to calm down while watching (or imagining) glitter settle to the bottom of a jar.

“This experience stands alone, even if you don’t know the show,” Caluori said. “If you’re looking for kid-friendly skills in your home, it may be a way to introduce your children to the characters, and that then helps you potentially try out the show.”

Danielle Reubenstein, executive creative director in the mobile division of the ad agency Possible, said she had been urging brands to view smart speakers as a way to connect with people rather than as a means to sell products — at least for now.

“It’s not a super-duper e-commerce platform,” she said. “It’s about having your customers interact with you in a way that’s going to make them more loyal to your product.”

Marketers say the data they are getting back from Amazon and Google has been relatively thin so far. It can include the amount of time people spent engaging with a skill and the number of sessions that were started and completed, Klaassen of 360i said.

Reubenstein said her firm typically got basic data on which questions to Alexa were completed or not. But once, in a meeting with Amazon, the firm briefly got a deeper look, seeing snippets of queries for one client’s Alexa skill that showed how customers can be easily frustrated when navigating a voice application.

“We started seeing a lot of cuss words in the user flow,” said Reubenstein, who declined to name the client. She said they were able to identify at what point most users were getting frustrated and adjusted the skill to address the issue.

These are early days for marketing on voice devices. Reubenstein compared it to when brands began making apps for mobile devices. But over time, she said, voice interactions will begin to replace many of the activities that people are conducting on screens.

“All of it is really a down payment on being able to use those technologies in the future,” she said.