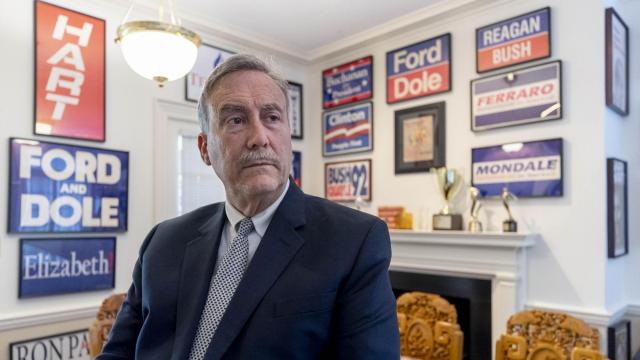 EDITOR'S NOTE: Mark Jurkowitz is publisher of the Outer Banks Sentinel. He is a veteran journalist who spent 10 years at the Boston Globe newspaper and eight years as the associate director of the Journalism Project at the Pew Research Center in Washington.

Referring to the just-launched independent candidacy of former Starbucks CEO Howard Schultz, Sabato downplayed his chances for success with some gleefully obvious jokes and puns. “I think he’s a day latte and a dollar short,” he declared, as the crowd of about 300 laughed heartily. His “campaign won’t amount to a hill of beans.”

These days it’s a rare feat when someone can spend an hour talking politics to a large group of people — or any sized-group for that matter — and keep all of them in good spirits. But that’s pretty much what happened when Sabato brought his unique mix of politics, performance and pun-ditry to the Outer Banks as part of the Don and Catharine Bryan Cultural Series.

An academic, author and ubiquitous media commentator, he also authors “Sabato’s Crystal Ball,” a political handicapping newsletter that offers the latest prognostication on key electoral races. So while the 2020 campaign may seem like a long way off to civilians, you can find a U.S. Senate electoral map on the “Crystal Ball” that currently projects Democrats to win 46 Senate seats and Republicans to win 51 seats in 2020, with three seats rated as toss-ups.

For the record, North Carolina Republican Thom Tillis’ U.S. Senate seat will be in play in 2020, and on the Senate map, Sabato currently has the state “leaning” Republican in that race.

“’Lean R’ simply means that all things being equal through November 2020, [Tillis] is likely to get re-elected as an incumbent with an incumbent president running who’s at least a little bit likely to carry the state,” said Sabato, during a Sentinel interview. “Everything’s aligned for him, but that can change. It’s so early…”

“I think its purplish red,” Sabato continued, describing the current political tint of North Carolina. “Over time, a lot of these states are going to turn more Democratic, but that assumes the Democrats don’t nominate a McGovern,” he said, referring to the Democratic candidate for president who carried one state in 1972. “You don’t ever know.”

While an astute and granular observer of politics and political trivia (Did you know that the 2018 midterm elections generated the largest voter turnout since the 1914 midterms?) the secret to Sabato’s appeal as a speaker is his way of dispensing detailed data with a stand-up comic’s timing and humor.

Discussing his list of possible 2020 presidential hopefuls, he largely dismissed independent-minded Ohio Republican John Kasich, quipping that: “No CNN commentator is going to be nominated by the Republican Party for president.”

He takes more seriously, however, the prospect of a run by Republican Mitt Romney, who twice unsuccessfully sought the presidency and who was just elected a U.S. Senator from Utah. Targeting Romney’s apparently unquenchable White House ambitions, Sabato declared that, “once you have presidential-itis, the only cure for it is six feet under.”

But he saved his best laugh-line for the large and rapidly growing field of potential Democratic candidates in 2020, capturing that state of that campaign by unveiling a photo of scores of distance runners packed together like sardines at the start of a road race.

Stressing that things can and will change, Sabato currently has President Trump—assuming he runs — commanding 230 electoral votes compare with 228 electoral votes for his Democratic opponent in 2020. The 80 electoral votes he now considers up for grabs, he adds, will decide the race.

In one creative use of numbers, Sabato addressed citizen concerns that too much money is flooding into our politics. While noting that between $5 and $6 billion was spent on the 2018 midterm elections, Sabato elicited chuckles when he informed the audience that considerably more cash — about $9 billion — was spent on costumes and candy this past Halloween.

Sabato is also careful to avoid picking sides or appearing to favor any party or ideology, insisting that there is plenty of blame on all sides for today’s “hyper-partisan” environment that he believes is worsening. In an interview with The Outer Banks Sentinel after his speech, Sabato explained why he doesn’t like to discuss polarizing topics such as whether Trump will be prematurely forced from office.

“It’s always possible,” that Trump will not serve his full term, he said. “But I never mention it because I’ve learned the hard way [that] if you bring up something like that, it brings up one hundred questions from people who want it to happen and one hundred objections from people who don’t want to hear about it. And it ruins the whole presentation.  You never cover any other subject.”

During his talk, however, Sabato can’t resist poking fun at Vice-President Mike Pence’s tendency to gaze admiringly at President Trump, calling it “a love story. It really kind of reminds me of Nancy Regan looking at Ronnie.”

And he largely refrained from opining on the president, with a few exceptions. While acknowledging that no one knows the outcome of the ongoing investigation by Special Counsel Robert Muller, Sabato predicted that Trump is going to want to seek re-election.

“This guy is where he always wanted to be — at the center of the action,” he asserted. “He is not going to give it up.” In one of the more somber moments of his speech, Sabato expressed concern that Trump “really doesn’t care about the truth. It’s important to get the facts right … I do care about the facts.”

Toward the end of the conversation, one audience member, conveying deep concern about the angry and divided mood of the country, asked plaintively: “Are we going to be all right?”

Sabato suggested a prescription in keeping with his non-partisan persona.

“I don’t know, but I sure hope so,” he responded. “At the leadership level, it is learning to compromise again.”