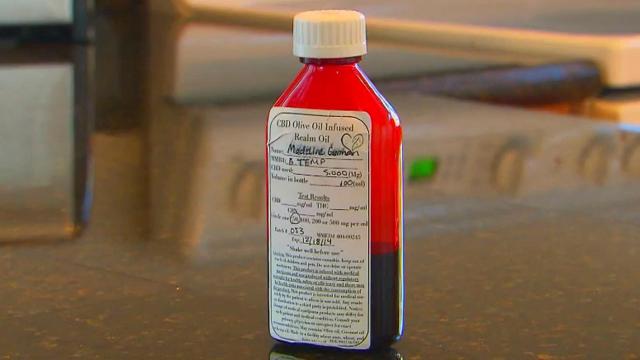 Raleigh, N.C. — State lawmakers on Thursday approved a measure to allow the use of CBD oil for medical treatment of seizure disorders, sending the proposal to Gov. Pat McCrory.

McCrory said Thursday evening that he would sign the measure into law.

"This law will help ease the suffering endured by children from whom no other treatments are effective against their seizures,” he said in a statement. "I want to congratulate the General Assembly for crafting a bill that not only improves the lives of many North Carolina children and their parents, but also provides common-sense regulation and facilitates clinical research at our major research universities."

CBD stands for cannabidiol, a compound found in marijuana. The oil is being increasingly used by doctors to treat intractable seizure disorders, especially in children, for which other therapies are ineffective and often toxic themselves.

"This is helpful to a lot of kids where nothing else seems to help," said Sen. Tom Apodaca, R-Henderson. "This (bill) will put North Carolina on the cutting edge of treating this type of epilepsy."

The Senate voted unanimously for the bill Thursday morning, and the House voted 112-1 a couple hours later to agree with the adjustments the Senate made to the proposal.

Under the bill, families and their neurologists would have to register with the state to possess and administer the CBD oil. Physicians also would be required to participate in a state pilot study of the effectiveness of the treatment on seizure disorders.

The bill initially called for the CBD oil to become legal as of Oct. 1, but lawmakers moved that date up to allow families to start using it in North Carolina as soon as the Department of Health and Human Services drafts rules for the pilot study.

The legislation also calls on the University of North Carolina at Chapel Hill, Duke University, Wake Forest University and East Carolina University to work with the registered neurologists on clinical studies of the CBD oil. Universities also could start growing hemp to conduct research on the plant itself.

Sens. Harry Brown, R-Onslow, and Gladys Robinson, D-Guilford, related their experiences of having family members with epilepsy and how any treatment should be supported.

"The horror of parents not having alternatives is just a terrible thing," Robinson said.

Sen. Floyd McKissick, D-Durham, said he was pleased lawmakers were open to a narrow use of the CBD oil without getting caught up in the larger debate over medical marijuana.

"This is going to help a lot of people whose lives are affected daily," McKissick said.

Sponsor Rep. Pat McElraft, R-Carteret, has repeatedly noted in legislative hearings that the bill doesn't include what she calls "the M-word" because the marijuana plant has been altered so much to produce CBD that it's legally considered hemp.

Sen. Thom Goolsby, R-New Hanover, noted Thursday that the psychoactive element in marijuana has been almost eliminated from the CBD plants.

Neurologists on the state registry would be responsible for bringing the CBD oil into the state to dispense. Pharmacies cannot dispense it because it isn't on a U.S. Food and Drug Administration list of approved drugs.

Sen. Jim Davis, R-Macon, asked to add a 10-year sunset provision to the bill, noting that CBD oil is undergoing fast-track FDA clinical trials and would probably be approved in a few years.

Apodaca responded that a sunset wasn't necessary now because lawmakers could always add it once the FDA approves the treatment.