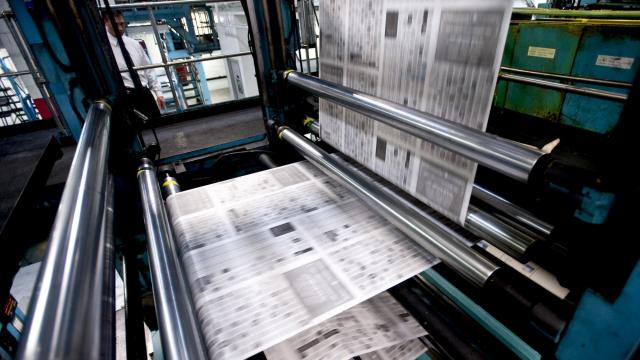 EDITOR'S NOTE: Margaret Dickson was a Democratic representative from Cumberland County in the N.C. House from 2003 through 2010 and in the N.C. Senate from 2010 through 2011.

It is no exaggeration to say that our great American free press in all its various forms is under siege. Our own president calls the Fourth Estate “the enemy of the people” and demeans its work as “fake news.” But the greatest threat to our the oldest and most traditional medium, the American newspaper, comes not from Donald Trump but from technological developments and proliferation of niche media, including social media. The American newspaper that was our watchdog during founding of our nation, the Civil War, the Great Depression, and great social upheavals into the 21st century faces severe diminishment if not outright extinction.

Into the early years of this century, the newspaper on our kitchen table told us a bit of everything about the world around us—hard news, sports, trends in living, who had died, and gave us crossword puzzle. Its core mission, as our nation’s founders understood and supported, was to be a check on governments at all levels, but it strove to be the total package. As technology exploded into this century, though, bringing us cable and satellite television, the Internet and smart phones—all of which operate in the moment 24/7 -- newspapers could not keep up. Throw in the Great Recession and their futures got even shakier and scarier.

Consider these facts from a study just released by the UNC-CH School of Media and Journalism.

The Fayetteville Observer, North Carolina’s oldest continually published daily newspaper was owned and operated by a local family for almost a century. It was sold in 2016 to a newspaper chain headquartered in New York with a stable of 144 daily papers, according to its website. Up and Coming Weekly remains a locally owned and operated community newspaper distinguished by its community engagement rather than a commitment to news content.

Several weeks ago, I sat in on two focus groups, one composed of Democrats and the other of Republicans, talking about various political topics. Everyone in each group was conversant on and shared opinions about national politicians and national issues, but almost no one in either camp had any idea who represented them in the North Carolina General Assembly or what the legislature has been up to in recent years. Most had a vague sense that Gov. Roy Cooper was focused on hurricane recovery, but that was about it for state concerns. In a word, both groups were clueless about state issues and state candidates.

All sorts of entities, many of them digital, are working to fill the void left by the dramatic shrinkage of American newspapers, but most of these are in major metropolitan areas, leaving the hinterlands to become what are increasingly known as “news deserts.” The cold, hard reality, though, is that no fixes are on the horizon, which leaves us, the American people and voters, on our own to find out what our governments, especially at the state and local levels, are doing. It also gives both elected officials and bureaucrats much more rein to do whatever they want to do with very little public scrutiny.

No matter how one feels about “the media,” we should all understand that a free and available press is fundamental to the operation of our democracy. As the UNC study authors put it,

“We need to make sure that whatever replaces the 20th century version of local newspapers serves the same community-building functions. If we can figure out how to craft and implement sustainable news business models in our smallest, poorest markets, we can then empower journalistic entrepreneurs to revive and restore trust in the media from the grassroots level up, in whatever form—print, broadcast or digital.”

You can find more about this national problem at www.usnewsdeserts.com