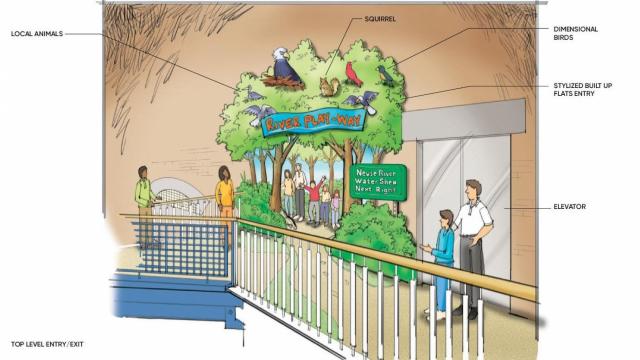 Marbles Kids Museum announced Tuesday that it's won a nearly $100,000 grant to build a new exhibit called River Play-Way on the second floor of its downtown Raleigh museum.

The $99,500 grant from Duke Energy's $10 million Water Resources Fund will make it possible for the museum to create and build the new exhibit which, according to a press release, is intended to "spark curiosity about the Neuse River Basin and encourage kids to care for and protect our waterways."

“River Play-Way will delight kids of all ages as they explore make-believe river habitats and engage in role play activities that foster an appreciation for the health and beauty of our waterways.” said Hardin Engelhardt, VP of Play Experience at Marbles Kids Museum, in a press release.

Planning and early design work for River Play-Way has begun. The exhibit will occupy a corridor on the museum’s second floor, according to the release. "Guests will step 'mid-stream' into a playful pretend river animated with interactives, color, lights and sounds," the release says.

Marbles plans to open the new exhibit in early 2019.

This project is separate from additional plans at Marbles to remake other parts of its second floor. The museum also is working to refresh the space from the museum's Art Loft space, through IdeaWorks and to the Think Tank room.