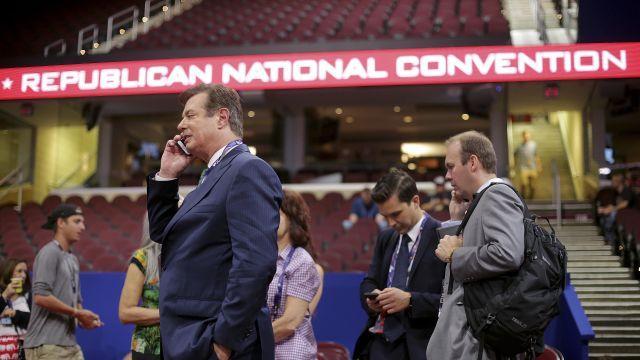 By The New York Times

Rick Gates, who was long the right-hand man to Paul Manafort, President Donald Trump’s campaign chairman, returned to the stand Tuesday morning as prosecutors began leading him through a clinical examination of his and Manafort’s business dealings, including how he hid income to avoid taxes and who they worked for in Ukraine.

Gates is testifying in Manafort’s trial on bank and tax fraud charges in a packed federal courtroom in Alexandria, Virginia, in a case stemming from the special counsel’s investigation.

Gates admitted Monday that he and Manafort committed crimes together.

Gates’s testimony was a clinical examination of their business dealings as Greg D. Andres, the lead prosecutor, walked him through thick binders of financial documents and emails. Under questioning, Gates described how he and Manafort set up companies in Cyprus that concealed their identities and true ownership. Gates and Manafort used a Cypriot lawyer nicknamed “Dr. K.” to establish these companies.

Gates testified that the money they earned for the political consultancy work in Ukraine passed through bank accounts in Cyprus that they controlled. Gates also said that they sometimes characterized payments as loans to mask income. He described how they also transferred money from their Cypriot bank accounts to a bank in the Caribbean.

Gates detailed during his testimony how he doctored invoices for many of Manafort’s expenditures — including purchases from luxury men’s clothing boutiques, landscaping and home improvements — to ensure that the invoices were sent to the companies owned by Manafort and not to Manafort himself.

The doctored invoices were first described by the vendors of the companies seeking payment last week, and Gates confirmed that he was responsible for editing the templates based on information Manafort gave him.

Gates described how he helped Manafort conceal the amount of taxes he owed. According to Gates, Manafort preferred to report income as loans. This, Gates said, “enabled Mr. Manafort to reduce his overall tax liability.”

In one instance, Gates disclosed that they had received money from an oligarch and politician from Ukraine, Serhiy Lyovochkin. Manafort instructed his bookkeeper to classify it as a loan for tax purposes, though Gates admitted in court that it was not one and Manafort had never received a loan from Lyovochkin.

Gates admitted that at Manafort’s behest, they later created a loan agreement for Lyovochkin’s payment, though no loan existed.

When one of the defense lawyers tried to suggest to Manafort’s tax accountant Monday that Gates had kept Manafort in the dark about his own finances, the accountant, Cynthia Laporta, pushed back.

“In most instances, it was clear that Mr. Manafort was aware what was going on,” she testified.

Gates’ statements reinforced that picture. He said that Manafort knew it was illegal not to report his foreign bank accounts to the Treasury Department but asked Gates to help him deceive his accountants so he could conceal income and pay less in taxes.

“I assisted Mr. Manafort in filing false tax returns,” Gates testified. “We didn’t report the income or the fact that the accounts existed.”

He said that some of Manafort’s income was disguised as loans from 15 shell companies that Manafort controlled, most of them in Cyprus.

Four Ukrainian oligarchs funneled money to Manafort’s accounts from their own shell companies in Cyprus, Gates testified. Once that income dried up, the government alleges, Manafort, with Gates’ help, falsified financial records so he could obtain bank loans to maintain his opulent lifestyle.

The case pits two of Trump’s former senior campaign aides, men who worked together for decades, against each other in a high-stakes battle that could land either or both of them in prison for years.

The prosecution is relying heavily on Gates to show that Manafort directed a multiyear financial fraud scheme, even if Gates helped him execute it. Gates, 46, Trump’s former deputy campaign chairman, has figured more prominently than Manafort in the documents that prosecutors have presented as evidence.

The accusations against Manafort and Gates mostly stem from their work helping to elect Viktor F. Yanukovych, the former president of Ukraine, and other pro-Russia forces in Ukraine, and to secure business ventures with the oligarchs backing those politicians.

But on Tuesday, Gates testified that Manafort also was paid $4 million a year to help Yanukovych govern after he was elected president in 2010.

It is unclear how long the arrangement extended.

But the revelation could be notable, because, while Yanukovych ran on a platform of integrating with the European Union, while also maintaining good relations with Russia, he eventually pivoted toward Moscow, which helped prompt mass street protests that drove him from power in early 2014. Gates testified about how he and Manafort continued working in Ukraine after Yanukovych fled the country in February 2014.

The men signed a consulting contract with a new party called Opposition Bloc, which was created and funded partly by the same Russia-aligned oligarchs who backed Yanukovych, Gates said. The party won seats in an October 2014 parliamentary election; Gates testified that the work ended then.

He also revealed that he and Manafort assisted Petro Poroshenko, the current president of Ukraine, in an unpaid capacity. Dmytro Shymkiv, an official in Poroshenko’s administration, said in an email that he was “not aware” of any such relationship.

It would be notable if there had been any ties between Manafort and Poroshenko, because Poroshenko’s administration was criticized by Trump’s supporters for targeting Manafort during the presidential campaign in an effort to help Hillary Clinton.

Gates revealed an intriguing new name as a client of Manafort on Tuesday — the Ukrainian oligarch Victor Pinchuk.

Pinchuk’s relationship with Trump has drawn the interest of the special counsel. In response to a subpoena for records, the Trump Organization provided details of a $150,000 donation in 2015 to Trump’s foundation in exchange for Trump doing a 20-minute video call into a conference organized by Pinchuk in Kiev that year.

Gates revealed that Pinchuk paid Manafort through a company called Plymouth Consultants Ltd. for what he described as a legal project. He did not provide details about how much was paid or when.

Pinchuk’s representatives did not respond to a request for comment. Pinchuk, a steel magnate who is generally regarded as pro-Western, has donated far more money — $13 million since 2006 — to the Clinton Foundation, according to its website.