Man with history of drug convictions charged with 3 Wake murders

Raleigh, N.C. — A man with a history of drug convictions was being held Tuesday afternoon at the Wake County jail, charged with murder in the deaths of three people across the county in the past 48 hours.

Evan Hunter Small, 27, of 5605 Alta Vista Court, has been arrested six times in the past year on charges of drug possession, DWI and, most recently last month, larceny.

“This is tragic situation to say the least,” said Eric Curry, spokesman for the Wake County Sheriff's Office.

Small is charged with three counts of murder in the deaths of Patricia Brewton Small, 79, Jimmy Wayne Small Sr., 80, and Jimmy Wayne "Sandy" Small Jr., 58. Authorities did not say how the suspect was related to the victims or what might have motivated the murders. 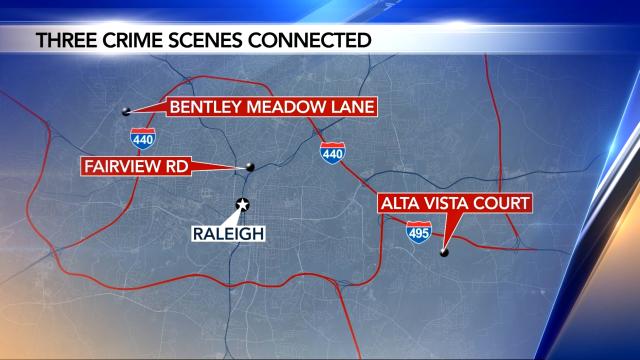 Curry said Tuesday morning that his office had linked the death of Jimmy Wayne Small Jr., who was found inside a home on Alta Vista Court, to the deaths of a man and a woman being investigated by Raleigh police. Those two deaths were Patricia Brewton Small, found in a home in the 3900 block of Bentley Meadow Lane, and Jimmy Wayne Small Sr., found in a business in the 1300 block of Fairview Road.

Sheriff's deputies and police tracked Evan Small to Wake Forest Tuesday afternoon, where they arrested him after a brief chase in which Small hit an RPD vehicle.

Authorities have not said how any of the three died.