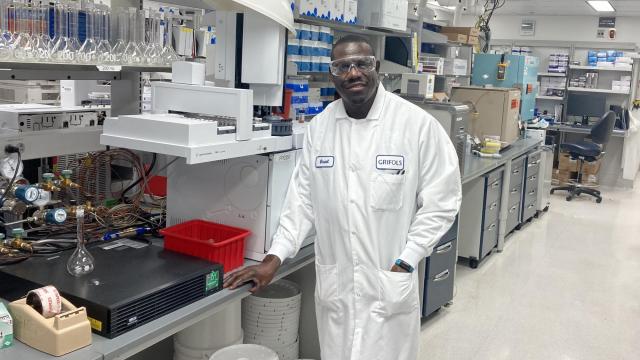 Oneal Campbell was living in Jamaica when personal tragedy inspired him to pursue a career in biopharmaceuticals in the United States.

"I grew up in Jamaica. Just before I came to the United States in 2008, my dream was to pursue a career in computer programming," said Campbell. "But a year before I came here, my sister got sick. She was very sick — she's my eldest sister and everybody was shocked when she got ill and suddenly passed away."

Campbell and his entire family were heartbroken when his sister died from her illness.

"The United States is a very blessed country," said Campbell. "When it comes to medical resources, the U.S. has all the big pharma companies here and drugs are affordable, but in Jamaica it's very expensive to get the medicine you need. If you don't have money, you're going to die. So, I saw my sister die right before my eyes. I looked at my sister and thought that if she was in America, maybe she wouldn't have died, or at least, not gone as quickly."

Both devastated and inspired by the experience of losing his sister, Campbell came to America with a new professional pursuit — to work in biopharma.

"I learned about the biopharmaceutical program at Wake Technical Community College and I started to research it. I realized that by working in a pharmaceutical company, I'd be able to lend myself to others and work at a company that would make people's lives better," said Campbell. "Seeing the pain that my sister went through — I wouldn't even want my worst enemy to go through that."

Campbell started taking preliminary courses at Wake Tech and then went on to North Carolina Central University where he graduated in 2017 after earning a bachelor's degree in pharmaceutical sciences. At N.C. Central, Campbell was a member of the Biomanufacturing Research Institute and Technology Enterprise program.

While enrolled in BRITE, Campbell also was a member of the International Society of Pharmaceutical Engineering, a not-for-profit association for people leading scientific, technical and regulatory advancement in pharmaceuticals. Campbell said ISPE helped him network with different companies ahead of graduation. He noted the education he got at Wake Tech, NCCU, and being a member of BRITE as critical stepping stones to launching his career. He felt that the resources and training he needed to pave a successful pathway were accessible and beneficial.

Before graduating from NCCU, Campbell got an offer to work as a contractor in production at pharmaceutical company Merck, one of the largest in the world. He worked there for a year and a half before taking on his current role as a chemist at Grifols, a Spanish multinational pharmaceutical manufacturer.

Given the pandemic, there has been an increased demand for doctors, nurses, other medical professionals, and life science workers like Campbell who are working to treat and vaccinate against the coronavirus.

As a chemist, Campbell works the night shift in the lab and loves what he does. He comes in at 11:30 p.m. and doesn't leave until 8 a.m. or later depending on the tests he's running. On any given night, you'll find Campbell in his lab coat measuring out ingredients and testing chemicals, proteins and pH levels that reveal data that inform production of life-saving medicine.

While his work is meticulous, it isn't rocket science and Campbell wanted to assure others that as long as a person knows how to carefully follow directions, they will succeed in the biopharma industry.

"You have to make sure that you follow all the protocols. It's not really hard, but it has to be meticulous and it's a repetitious job. You have to be on point. It's a very serious job that is FDA regulated. You have to dot every 'i' and cross every 't,'" he said. "But, truth be told, depending on your role, you don't even use half of the science or math you learned in college. If somebody wants to prepare to enter the pharmaceutical industry, I don't think they should be fearful of it from a science or math standpoint."

Campbell emphasized that during his test trials, there is always the Standard Operating Procedure, a set of step-by-step instructions compiled by the company to help workers carry out complex routine operations, there to guide him.

Another perk of his job? The security. As Campbell put it, unfortunately, people will always get sick and there will always be disease, ailments and illness. However, this gives biopharma careers a level of security and longevity that is hard to come by in other professions.

"It's a very secure field to be in — pharmaceutical companies will be here forever. As long as there is life on earth, they're here to stay. It can also be a very lucrative career, with good benefits," said Campbell.

The greatest benefit Campbell enjoys though, is the satisfaction he finds in his work. Every day that Campbell goes into the lab, he is reminded of his sister Victoria and the reason he pursued a biopharma career in the first place.

"My advice to anybody who wants to work in the pharmaceutical industry, is, don't do it because you want to get rich — look at the bigger picture. The bigger picture is helping someone," he said. "I gain satisfaction and feel accomplished knowing that I'm helping people. Grifols makes therapeutic medicines for the entire world. So when I go to work, just knowing that the product I'm working on is going to help somebody — that makes my day."