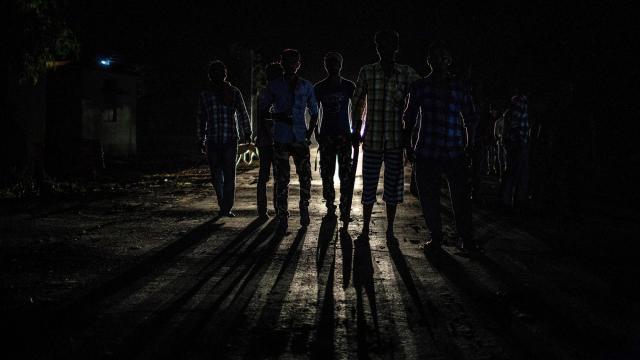 NEW DELHI — The hunt is over.

A man-eating tiger that stalked the hills of central India for more than two years, eluded capture many times and was suspected of killing at least 13 villagers, was felled by a bullet Friday night, officials said.

The plan had been to tranquilize the female tiger, called T-1. But according to the hunters who tried to capture her, she roared and charged after being hit by a tranquilizer dart at short range, and there was no choice but to shoot her dead.

Villagers in the area terrorized by T-1 (forest rangers had given her the name) erupted in joy when they heard about her death, shooting off firecrackers, passing out sweets and pumping their fists in the air.

“This is a coldblooded murder,” said Jerryl Banait, an animal rights advocate who had gone all the way to India’s Supreme Court in an attempt to force the authorities to spare the tiger’s life and capture her instead.

For months, the noose had been tightening around T-1. Hundreds of forest rangers fanned out across the jungles of central Maharashtra state, combing the bush for tiger tracks, scat, stray hairs, long scratches on trees and anything that might reveal where she was hiding.

The operation grew and grew, eventually encompassing a heat-seeking drone, more than 100 remote cameras and a team of specially trained Indian elephants with sharpshooters mounted on their backs. It became one of the biggest, longest and most expensive tiger hunts in India in recent memory.

Three things made it especially hard.

One, T-1 was a mother of two young cubs, and the authorities did not want to harm the young tigers.

Two, the grass was high and bushes overgrown (the monsoon rains have ended only recently).

Tiger experts say she had benefited from all the failed attempts to catch her and knew how to slink through the bush undetected, sometimes just a few steps ahead of the teams of rangers and police officers looking for her.

“She has learned from all these botched capture operations,'’ said Nawab Shafath Ali Khan, a famous tiger hunter who the authorities had called in to help. “We’ve made her very smart. Brilliant, actually.”

The break may have come from a surprise source: a bottle of Obsession cologne.

Obsession (a popular men’s fragrance in the 1990s) contains civetone, a compound originally derived from the scent glands of a civet and proven to make wildcats go gaga. In areas where it’s been sprayed, cats roll around in it, and they take huge sniffs and luxuriate in the smell for several minutes.

Last month, the Indian rangers started using a few spurts of Obsession on bushes here and there, hoping to draw out T-1. On Friday afternoon, the rangers sprayed some Obsession and tiger urine in an area where she was believed to be hiding.

A few hours later, villagers saw a female tiger trotting down the road. People began to panic. The authorities dispatched teams to evacuate nearby cotton fields.

Khan’s son, Asghar, also a hunter, rushed out with a team of rangers. They were using a small open jeep. They spotted a female tiger for a few fleeting seconds moving through the bushes. Tiger stripes are like fingerprints; each pattern is unique. From the stripes they could tell that the tiger was T-1.

One ranger fired a dart, forestry officials said. The dart hit. But, according to the authorities, T-1 moved back, roared loudly and charged the open jeep. Asghar Khan then fired a bullet from a high-powered rifle. The authorities said it was in “self-defense.'’

“We would have lost a few men had we tried to save her,'’ said Khan’s father, Nawab.

The bullet hit her underside, and she died on the spot. Photos show her with a big red hole in her stomach. Officials are now performing an autopsy.

Questions are circulating about whether the decision to use bullets was made too hastily. Sarita Subramaniam, another wildlife activist (and a dentist), who had also gone to court several times to try to save T-1’s life, said Saturday that she was “in denial.'’

“It’s state-sponsored legalized hunting of a voteless and speechless tigress mother,'’ she said.

Subramaniam bristled at the designation of T-1 as a man eater.

“She was doing what any mother would do,'’ Subramaniam said. “She was simply trying to defend her cubs and her territory.'’

But there’s little doubt that T-1 was a dangerous wild animal. Her first known victim was killed in 2016 — an older woman found facedown in a cotton field, huge claw marks dug in her back. The next was a farmer, his left leg torn off.

The killings continued for more than two years, sowing panic. In August, the mauled body of Vaghuji Kanadhari Raut, a cattle herder, was found near a rural highway.

What was especially frightening about that attack was that Raut had been standing in the middle of a ring of cattle when he was tugged down by the neck. None of his cows were touched. He was believed to have been the 12th victim.

Based on DNA tests, images from remote camera traps, numerous spottings and tiger tracks, the authorities have pinned at least 13 killings on T-1, who was believed to have been around 5 years old.

She consumed chunks of flesh from several people she killed, and tiger experts say she clearly developed a taste for humans, as opposed to killing them because she felt threatened. Many people in this area stayed away from their fields and suffered economic losses because of it.

A crafty man-eating tiger on the loose may sound like something out of a Kipling story. But it’s a very real — and growing — problem in India today.

The country’s effort to protect tigers, in a way, is a victim of its own success. India’s critically endangered tiger population is soaring. Closer monitoring, new technology and stricter wildlife laws have led to a sharp increase in the tiger count, from 1,411 in 2006 to an estimated 2,500 today.

Many tigers are now running out of space, spilling out of their dedicated reserves, roaming along highways and skulking through crowded farmland.

T-1 never lived in a dedicated tiger reserve; 30 percent of India’s tigers don’t. She roamed a forested area of about 60 square miles just on the edge of busy farmland near the town of Pandharkawada. Even if she had lived, according to the authorities, T-1 could never have been reintroduced into the wild. Few villagers in this area expressed anything but joy that she was gone.

“Now our lives will be back to normal,” said Hidayat Khan, who lives in the area where T-1 killed several people. “We can go to our fields and do our work.”

But, he added, the cubs are still out there.

The authorities have not said what will happen to them, and some tiger experts say that perhaps the young animals have grown accustomed to eating human flesh.

On Saturday, villagers spotted one of the cubs climbing a hill, near where T-1 had died.