Man defends self after offering women money to participate in fetish

Raleigh, N.C. — A Raleigh man defended himself Tuesday after being called out on social media for inappropriate behavior.

The man at the center of the controversy says he's a talent scout who approaches attractive women in parking lots and stores.

He asks them if they would be interested in a professional modeling job, but one woman said there was nothing professional about the offer.

Deirdre Looney posted a warning on Facebook after her friend was followed out of a store and approached by a man with a colorful card that said, “Fun Modeling” and “Get paid to play dress up!”

“One girl said that he had been doing it for over seven years,” Looney said.

One person posted a picture of the man.

“As soon as I saw the picture, I knew exactly who he was because he comes in the store I work in all the time,” she said. “But he doesn’t purchase anything; he just walks around.”

Looney said after she made the connection, she emailed the man, Bernard Friend, to see if it was a legitimate opportunity.

After a brief back-and-forth, Looney was offered money to pose while participating in a fetish known as “CFNM," which stands for "clothed female, nude male."

Looney said she would like to see Friend investigated.

“Nothing is going to happen until something bad happens to somebody,” she said. 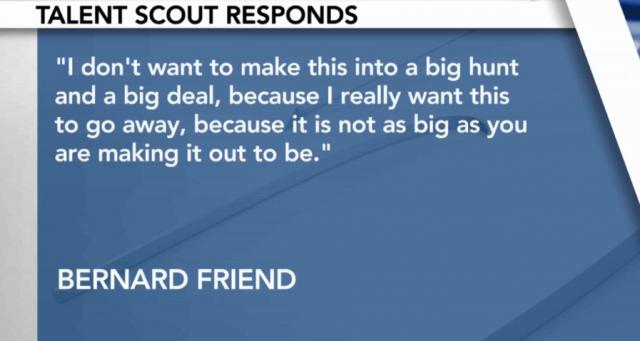 “I don’t want to make this into a big hunt and a big deal because I really want this to go away because it’s not as big as you are making it out to be,” Friend said in a phone interview.

Friend said that he has a fetish but that he is also a talent scout for adult websites.

“If you found 90 percent of the people that I approached, 90 percent would say, ‘Oh, you have this story all wrong, ma’am. This man was very respectful.’”

Friend’s wife, who did not want to be named, defended her husband.

“If someone is an adult who is a consenting adult, that’s fine,” she said.

Looney said she believes women should be warned about what's not mentioned on the business card.

“I am just glad to get the message out there so people can be more aware of things like this because it’s scary stuff,” Looney said. “It really is.”

Police departments in Raleigh, Durham, Garner, Wake Forest and Knightdale said they are not investigating Friend. The offices said they have not received calls in regards to any incidents.