Raleigh, N.C. — The man accused of fatally beating an employee of a Dollar Tree discount store four years ago in Cary pleaded guilty Wednesday as part of a plea deal, and was ordered to serve between 306 and 380 months in prison.

Under the agreement, the judge imposed a minimum sentence of 25 years up to a maximum of 31 years in prison, without the possibility of parole. Prosecutors said they agreed to the deal essentially because they believe Blount would be too old to commit another murder if he is released from prison.

Jury selection for Blount's murder trial began on Nov. 4, and prosecutors and the defense had a difficult time seating jurors who had not previously heard about the case.

Prosecutors told the judge they planned to call at least 37 witnesses as part of their trial.

Luciano Mariano Andia, 72, was found dead in his Toyota Corolla at the High House Crossing shopping center on N.C. Highway 55 on the morning of May 9, 2015. According to police and witnesses, Andia was known to arrive early for his shift at the Dollar Tree in that shopping center. 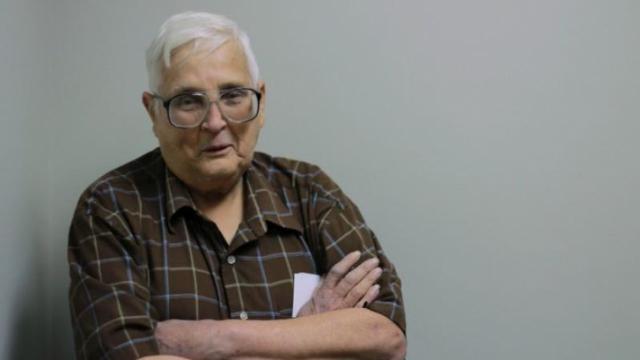 Prosecutors said the body of Andia, who had moved to the U.S. from Venezuela, was found in his car by co-workers, who didn't recognize him at first because he was bloody and bruised after being beaten so badly by Blount.

While recounting the evidence collected in the case, prosecutors told the judge that Andia had been struck at least 12 times with a hammer, which was recovered from a trash dumpster for the apartment complex where Blount lived with his girlfriend and two young daughters the couple shared.

Investigators were able to connect Blount to the the slaying of Andia through surveillance video in which a man was seen using the dead man's debit cards.

A search of trash bins near Blount's home at 870 Buckingham Court in Cary turned up Andia's credit card, receipts and clothing linked to the purchases made using Andia's State Employees Credit Union debit card, and "an object covered in a red dried liquid consistent with human blood" mixed in with trash that bore the names of Blount and his girlfriend, according to a search warrant.

Immediately after Andia's death, his relatives were in deep grief and shock at his passing.

"He did what a man has to do, supposed to do, and that is take care of his family," he said.

David Saacks, the assistant district attorney, told the court that Blount was convicted of second-degree murder in 1994 from an incident in Durham, and was released in 2005.

Prosecutors said Blount would have been eligible for the death penalty except for being disabled because of his IQ, which has been measured at 67.

Prosecutors said they decided to pursue a plea deal because Andia's relatives wanted to settle the case and put the matter behind them.

"it's the state's hope that this is, in effect, a life sentence," Saacks said.

The victim's daughter tearfully addressed the court, relaying how painful the ordeal has been for his family.

"I don't understand how someone could be so evil in what he did," Andia's daughter, Jacqueline Rosciano, told the court through tears. "My dad's life was cut short because this animal did not have a conscience."