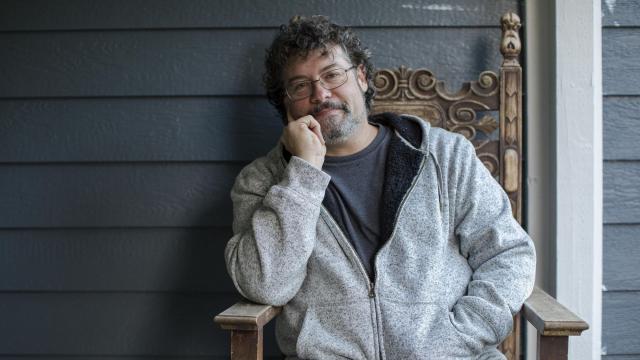 Jake Creviston, a nurse practitioner, has been repeatedly mistaken for a doctor.

Adam White says the veterans he cares for as a student nurse at the VA hospital feel comfortable around him because “I’m a big burly guy with a beard.”

Glenn Fletcher, after being laid off from a lumber mill during the financial crisis, found a new career in nursing. And with it, “a really good feeling putting your head on the pillow realizing you’ve helped other people.”

The experiences of male nurses offer lessons that could help address a problem of our time: how to prepare workers for the fastest-growing jobs, at a time when more than a quarter of men are not in the labor force.

Only 13 percent of nurses in the United States are men, but that share has grown steadily since 1960, when the number was 2 percent, according to a working paper published in October by the Washington Center for Equitable Growth.

We talked to a dozen male nurses, with various career paths and specialties, working in the Pacific Northwest, where recruitment efforts have focused on bringing men into nursing. Some were drawn to the caregiving, others to the adrenaline of the work. It’s a reliable, well-paying job at a time when that’s hard to come by, they said, but also one they feel proud of.

Women have been entering male-dominated fields for decades, but it’s less common for a predominantly female occupation to have a substantial increase in its share of men. Yet the jobs that are shrinking tend to be male ones, and those that are growing are mostly female.

Nursing is no paragon of gender equality: Even though men are a minority in the field, they are paid more than women. The stigma against men still runs deep, particularly among older patients and in parts of the country with more traditional gender roles, nurses said. (Several said the movie “Meet the Parents,” in which Ben Stiller played a nurse whose girlfriend’s father wasn’t thrilled about his career, didn’t help.)

But for some men, the notion that caregiving jobs are women’s work is outdated. Progressive attitudes about gender roles, as measured by the General Social Survey, were associated with more men who entered nursing, the new paper found.

“This narrative that men can’t provide care in the way that women can is part of that broad cultural narrative that misunderstands what nursing’s about,” said White, the VA hospital student nurse, who is earning his nursing degree at Oregon Health and Science University in Portland. “We need to talk with young people about caring as a gender-neutral idea but also as something that’s rooted in skills, in expertise.”

The researchers also found that economic factors have played a role — a decline in some jobs because of automation, trade and the housing crisis, and a growth in jobs and wages in health care. Nursing is growing much faster than the average occupation, and wages have increased steadily since 1980. The median salary is $68,450, about the same as the median salary for college-educated workers overall. “A lot of those manufacturing jobs and things of that nature just aren’t there anymore,” said David Baca, an emergency department nurse in Medford, Oregon. “We get paid a really livable wage, and I think that is now starting to attract more male nurses.”

The paper used census data for men who were born in the United States and turned 18 between 1973 and 2013. They found that the increase in male nurses was largely uniform across the country, although black and Hispanic men and those in rural areas were less likely to become nurses.

Nursing is a career that both men and women often start later in life, in part because it’s possible to become certified midcareer and without a bachelor’s degree. But as hospitals increasingly require nurses to have a four-year degree, it could become a barrier for men who want to enter the field, the researchers said.

“We learned that workers can take a very long time to settle into occupations, but that is not the traditional path that we think of when we think about training our workforce,” Wozniak said.

Male nurses are more likely than females to have worked as an emergency medical technician, military nurse or lab technician, and to work in acute care in hospitals rather than primary care clinics. Nearly half of nurse anesthetists, one of the highest-paying nursing jobs, are men.

In interviews, men said they liked the variety of work: Nurses can be bedside caregivers, surgery assistants, educators, technicians or administrators.

Several said they felt an advantage in applying for nursing jobs because men are a minority in the field. Hospitals and patients benefit when nurses more closely reflect the patient population, research shows.

Sometimes patients prefer a nurse of a certain sex, particularly for procedures like inserting a catheter, nurses said, and some men feel more comfortable talking openly with another man.

“I work on this floor with people who just had urology surgery or amputations, and they have told me that when I come in the room and shut the door behind me, they feel more understood and can drop the tough guy attitude,” White said. Nursing became a woman’s job because women were seen as natural caregivers, said Patricia D'Antonio, a nursing historian at the University of Pennsylvania. But until the second half of the 19th century, men were assigned nursing jobs that required physical strength and bravery, like caring for patients during a dangerous epidemic. That began to change when Florence Nightingale brought a group of female nurses to the Crimean War in 1854.

Nursing became such a gendered profession that men were barred from serving in the Army Nurse Corps during the two world wars. Not until the 1960s did the nursing field begin trying to better reflect its patients in terms of both gender and race, D’Antonio said.

The Oregon Center for Nursing, a workforce development group, began recruiting male and minority prospects to nursing in the early 2000s. It started a marketing campaign — “Are you man enough to be a nurse?” — that spread nationwide. Posters showed male nurses carrying a snowboard or wearing a motorcycle jacket.

“It was just rethinking how we describe the work and focusing on the kind of person it takes to be a great nurse,” said Deborah Burton, who founded the center and is now chief nursing officer at Providence St. Joseph Health, a health care system in the West.

More recently, efforts to recruit male nurses have focused less on gender and more on the rewards of the career, with the slogan, “Do what you love and you’ll love what you do.”

Nurses said they welcomed the change. “I don’t think we’re doing any favors to society by conveying this message that nursing is this super masculine thing,” said Creviston, a psychiatric nurse practitioner and mental health nursing professor in Portland, Oregon. “If your motive is to bring the right men into the field, show how rewarding it is to hold the hand of a dying person.”