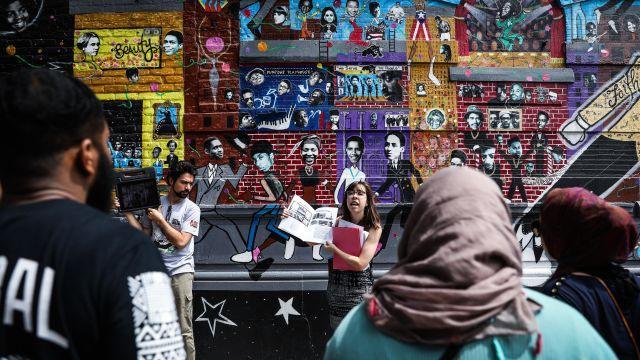 So it is an apt time to remember what lies behind the rapidly changing streetscape, particularly the legacy of the man for whom the boulevard is named. That is the mission of Katie Merriman, a 32-year-old Ph.D. student from the University of North Carolina at Chapel Hill, who gives free walking tours about the Muslim history of Harlem about five times a year to help preserve a legacy that is at risk of being forgotten.

On the last Sunday in July, about 30 people gathered on a warm morning to walk through the Harlem streets for nearly three hours, to visit Muslim-related sites past and present. Many of the places Merriman pointed out were already gone or transformed beyond recognition. The site of the African National Memorial Bookstore, where Malcolm X studied black history into the night, is now a 19-story state office building. A local mosque, Masjid Aqsa, that served the area’s African Muslim immigrants, was pushed out in 2012 after its rent more than tripled, and its former site is now a vacant lot. (Two years later, it found a new home in East Harlem.)

“We are here because a lot of this history is being erased,” Merriman, whose own roots are Irish-American, told the group at the start of the walk. “The reason I am giving this tour is because you are mostly not going to see plaques. These histories are mostly oral histories and not written down.”

Many of the people on the tour were Muslims in their 20s with Arab or South Asian roots, who wanted to learn about a history they felt connected to as Muslims but knew little about. Some, economically, were gentrifiers themselves, new residents of the neighborhood, but they wanted to feel like part of the community they now called home.

“Back home, we think of America as a country that Muslims have only recently immigrated to,” said Tasneem Ebrahim, 21, a Columbia University undergraduate from Bahrain. “And nobody learns about the fact that Muslims were here since the beginning, since the first time people came to this country.”

The tour showed Islam as it is lived today in Harlem. Young girls in white hijabs kidded around in front of an Islamic center on West 116th Street, on a street that anchors a neighborhood sometimes called Little Senegal. Tucked on West 127th Street, a few steps away from the bustling brunch scene, was the Nation of Islam’s Muhammad Mosque No. 7, which Malcolm X had led (in an different location), before breaking with the group in 1964.

Men wearing bow ties and suits, the signature attire of men in the Nation, sold literature and guarded the door. Brother Richard Muhammad greeted the tour and invited everyone inside another time, when services were not in session.

Around the corner on Adam Clayton Powell Boulevard was the Allah School in Mecca Street Academy, the home of the Five-Percent Nation, a splinter group of the Nation of Islam. Their storefront and garden, given to the group for $1 in the 1960s by Mayor John V. Lindsay, remains largely unchanged amid a streetscape of new condos and rental buildings. A caretaker, Ahrieff Allah, 76, welcomed the visitors in to see collages of photographs and a portrait of Allah, the group’s founder, who had been called Clarence 13X when part of the Nation.

“He is the father of everything you are about to see here,” Ahrieff Allah said, gesturing to the portrait.

Merriman explained to the group how Allah, who gave himself the name of God in Islam, preached that men were the creators of their own futures, and that black men were God personified. The ideas of the group, which is also known as the Nation of Gods and Earths, have traveled incognito into mainstream culture through lyrics of hip-hop artists like Nas, Busta Rhymes and Wu Tang Clan, who were influenced by it.

“Breakin’ it down. Word is Bond. Starting a Sipher,” Merriman said. “This is all coming out of this philosophy.” On the corner of 124th Street and Adam Clayton Powell, the shining white Hotel Theresa, once the nicest hotel in Harlem, still stands, but it has become an office building. It is there in 1960 that Malcolm X met with Fidel Castro, and where Malcolm founded his Organization of Afro-American Unity in 1964, shortly after his break with the Nation. Yet no plaque commemorates this history.

Different strands of Islam mixed in New York, creating the seeds for diverse forms of worship, Merriman explained at the tour’s start. In the 1920s, Bengali ship workers jumped ship, moved to Harlem and married into the black community. A Muslim missionary from Sudan, Satti Majid, spread the ideas of Sunni Islam. The history of Islam in New York, she added, is as old as the city itself, in part because 10 to 15 percent of slaves are believed to have been Muslim.

Merriman’s personal link to the subject is through her father, who grew up in Washington Heights. In 1965, he biked over to the Audubon Ballroom the night Malcolm X was murdered there to see what the chaos was. At Vassar College as an undergraduate, Merriman started to unpack for herself the events of Sept. 11, and decided she wanted to help reduce misunderstandings surrounding Islam. She has given her tour since 2014, mostly spreading the word through Facebook. Hundreds of people express interest each time she offers one.

Merriman did not mention her personal connection to the subject until the end of the tour, even though her identity as a non-Muslim woman of European heritage was the first thing some of the participants noticed. “She knows what she knows,” said Luqman a-Rahman, 29, an African-American who was raised Muslim in Crown Heights, midway through the tour. “She is going to give me the sandwich, and then someone I know is going to give me the dressing.”

But for Sahar Amarir, 25, a French Moroccan graduate student from Paris doing a summer internship in New York, the idea of a white woman leading a multicultural group on a tour of Muslim Harlem made perfect sense given the liberal context of New York City, she said.

“I think as far as the philosophical idea of cosmopolitanism goes, this is the closest that human beings ever got to that,” she said. “What’s fascinating, being in America in this time of polarization, is that you are seeing the worst and you are seeing the best.”