Make the Friends Happy. Don’t Have a Wedding Party. 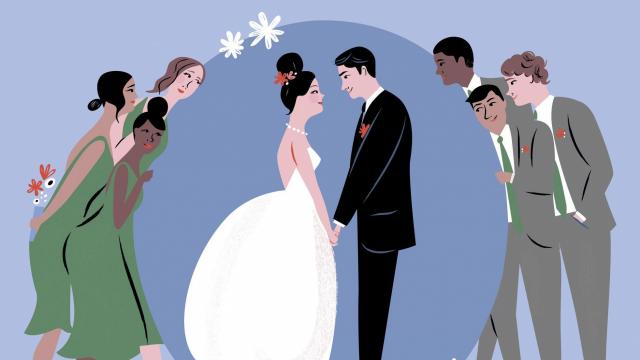 When Bobby Rosen and Cara Safon got engaged last August, there were many decisions to be made. A venue had to be chosen. A guest list would be created. Neither Rosen nor Safon is religious, but the two began discussing possible Jewish and Chinese traditions that they felt might add to their ceremony.

One decision required little to no discussion: Both Rosen and Safon were certain that they did not want a wedding party to accompany them down the aisle.

“We had talked about this years before we got engaged,” Safon said. “We were in full agreement that we didn’t want to have a wedding party.”

Safon and Rosen, both 29, met during a semester abroad in South America while they were attending University of California, Berkeley. They began dating their senior year and have been together since. Rosen is in his final year of Yale School of Medicine, while Safon is a researcher at the Yale School of Public Health.

They are a part of a growing number of couples who are opting out of the wedding party entirely, regardless of the size and style of the wedding.

“It’s part of this whole trajectory of weddings becoming more personalized,” said Marcy Blum, the founder of Marcy Blum Associates, an event planning firm based in New York. “That started 20, 25 years ago. Now, every single thing is up for question.”

Blum, who has been in the planning business for 31 years, notes that the trend of partyless weddings picked up about four to five years ago. This is in part because of the shifting age at which couples are getting married.

The desire to spare friends the stress of being a bridesmaid or a groomsman is a common theme among these couples, and speaks to a sometimes divisive view of what it means to be in a wedding party. Has it become less of an honor, and more of a hassle?

Tiffany Mahmood and Sean Flatow were married in August at a private property belonging to the groom’s family in Amagansett, East Hampton, New York. Flatow, 29, is an assistant district attorney in Manhattan; Mahmood, 33, is an associate at the law firm Goodwin Procter in New York. She notes that her primary goal was for her 150 guests to focus on enjoying themselves.

“I wanted our wedding to feel like a really big party,” she said. “I didn’t want anyone to feel like they had a role, or a responsibility to fulfill. I don’t even like the idea of telling someone what color to wear. I wanted our friends to be free and unique, and be themselves.”

Flatow didn’t mind. Mahmood said that she and her fiancé “liked the idea of it being just the two of us up there. Plus, I feel like there’s always a little friction when it comes down to a bride telling her bridesmaids what to wear, or what events to organize for her.”

A desire to avoid drama was a key factor for Madeline Popelka, 28, the owner of Digi, a digital marketing company based in Berkley, California. She and Adam Beier, a finance manager of Ripple Foods, were married last August.

“I went through the wedding process with my sister and a number of friends,” Popelka said. “And I saw that when they had wedding parties, people would get very hurt that some friends were invited to be in the bridal party and others weren’t. Their friendships weren’t as strong after the wedding because of that.”

Rather than risk it, Popelka, who enjoyed being her sister’s maid of honor, decided that she would do without for her wedding. Instead, she and Beier, 34, planned an intimate wedding with just 38 guests.

“All of my best friends who were there knew that they were important to me,” she said.

Popelka also wanted to spare her friends the costs associated with being a bridesmaid, noting that she had spent, “easily thousands of dollars” participating in nonlocal weddings before.

It costs, on average, $1,200 to $1,800 to be a bridesmaid, according to Angela L. Thompson, who teaches sociology at Texas Christian University in Fort Worth, Texas. “That’s a huge amount for an individual, especially if you have other financial obligations,” she said. “And the cost has gone up,” she said. “The addition of destination bachelorette parties in particular has had an impact; there can be huge variations depending on if you’re a local bridesmaid, or if you’re from out of town.”

It’s an undeniably large cost, especially, as Thompson says, “for what amounts to four or five hours of a friend’s life. It’s a big commitment to ask of someone.”

Blum says that couples often try to shoulder some of these costs to ease the burden. “There are so many variables on who pays for what,” she said. “Should you pay for the bridesmaids’ dresses? Part of the groomsmen’s tuxedos? Those are added costs to a, likely, pricey event. A lot of couples think, we don’t need this! We can get ourselves down the aisle.”

These costs can skyrocket even more as wedding parties become larger and larger. Blum says that, for her couples who do have wedding parties, they are almost always include at least six attendants on each side, sometimes ballooning to 10 or 12.

“You can’t have your second cousin on one side and not the other; you can’t have two of your college roommates and not the third,” she said. “It’s the same conundrum that it is for guests, but the pressure factor becomes a little more obvious when it’s in the wedding party.”

The wedding party tradition has historical roots dating back to ancient Rome and feudal China. “A bride would have attendants to protect her from evil spirits,” Thompson said. “By having several women who are dressed alike, the spirits, or kidnappers, wouldn’t know which person was the bride.”

While being identically dressed may seem less appealing today, the role of bridesmaid or groomsman remains a position of honor. “There is a status associated with being in a wedding party that sets you above other guests,” Thompson said.

That separation of wedding party and guests is what Safon and Rosen are hoping to avoid when they get married later this year. “We feel really blessed to have a lot of important people in our lives,” Rosen said. “We want everyone who is there to participate equally.”

Blum says that her couples who skip having attendants are finding other ways to include, or recognize, particularly close friends and family. “You can have friends be ushers. Or have them walk down the aisle and sit down. Do readings. There are endless variations.” Mahmood and Flatow had a close friend act as their officiant; they also asked a number of friends to speak at their reception.

Popelka and Beier kept their guest list small to make the entire wedding feel intimate; rather than a traditional reception, they had dinner with their guests at San Francisco’s Wayfare Tavern. Both couples note that their close friends were neither hurt nor surprised by their decision to forgo a wedding party.

Since getting engaged, Rosen and Safon have planned many details of their upcoming wedding — they’ll be married on June 3 at the Loeb Boathouse in Central Park — but are still sorting out the ways in which they’ll get their friends involved. They might like their friends around as they dress for the day; Rosen said they are undecided about whether friends will give speeches at the reception.

“That’s the beauty of us planning a wedding the way we want, Bobby,” Safon said to Rosen. “We can do it our way, and make it a really inclusive event.”