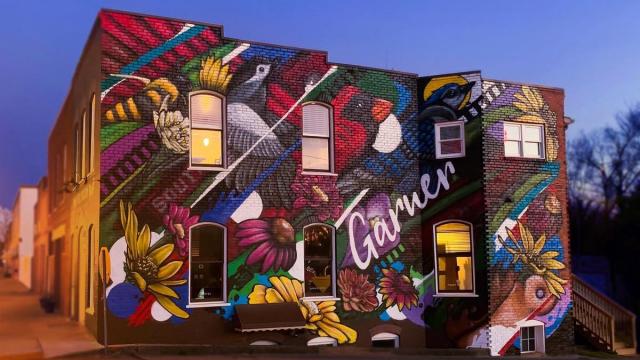 The "wood and water stop" by the North Carolina Railroad didn't amount to much when Henry Fort purchased land near it in December 1874.

But when Fort, a former slave who was an accomplished furniture maker, looked at the area around that rustic stop, he saw an opportunity, and he started what is believed to be Garner's first business. That stop along the rail line, and its surroundings, grew to be what is now Downtown Garner. Today, opportunities — though perhaps not endowed with the same historic significance as the one Fort seized — abound in Garner's original business district.

"Historic Downtown Garner connects our hometown roots with our future as a growing crossroads of cultural arts, recreation and creative entrepreneurship in the community," said Mari Howe, Garner's downtown development manager. "Through private development, public investment and historic preservation, we're expanding our downtown to become the destination for local flavor and flair in Garner."

A decade after that plan was adopted, a transformation is in bloom along Main Street. Shops and offices in beautifully renovated storefronts bustle with activity. The buildings in the historic business district enjoy full occupancy. And on just about every weekday, cars fill most of the available parking along Main.

Downtown has also become the site for hugely popular special events — such as the Trick-or-Eat and April Foods Day food truck rodeos — that attract thousands of people from around Triangle.

Later this year, a new 40,000-square-foot recreation center at the corner of Main and Montague Streets will open and serve as an anchor for the next wave of redevelopment in downtown. The center will feature three high school-sized basketball courts, an elevated, indoor walking track, and multipurpose rooms that can accommodate a wide variety of programming.

A new visual gem on Main Street is Sean Kernick's Garner-themed mural, which pays homage to the town's past and to its natural beauty, but also suggests a new, transformative blossoming for this fast-growing community of 33,000 residents adjacent to downtown Raleigh.

Kernick's dazzling artwork spans the entire side of the Full Bloom Coffee and Craft Café building on West Main Street and is the result of private and public investments at work. Funded through a partnership involving Full Bloom owner Patrick Byrd, the Downtown Garner Association and the United Arts Council of Raleigh and Wake County, the mural is a showstopper — and sometimes a traffic stopper — that is certainly giving Downtown Garner its desired flair.

"As a downtown board member, I was part of the revitalization effort early on. Getting the mural on Full Bloom was an opportunity for me to contribute to that effort," said Byrd, who has lived in Garner all his life. "It was also an opportunity to create something on this building that could be an anchor and destination for our downtown. The mural represents a little bit of this moving forward as a downtown and a community."

After reading "The Joy of Coffee" — "an essential guide to buying, brewing and enjoying" — Byrd was inspired by the journey coffee takes to get from the farmer to his cup. As the founder and owner of Rising Stream Media, which is also located in Downtown Garner, Byrd had space in the back of his building to start roasting and experimenting.

"I decided to get a commercial coffee roaster to put in the back. I wanted to be able to truly learn how to bring out all those nuances and aromas in the coffee that I was roasting that I couldn't necessarily do on my home roaster," Byrd said. "My media company building actually provided the catalyst for me to be able to start doing this coffee thing on the side. Full Bloom grew out of that."

Full Bloom Coffee and Craft Café opened two years ago, and the mural was completed earlier this year. The café offers organic, fair trade and Rainforest Alliance-certified coffee, along with housemade menu items. The beautifully renovated century-old building is perfect for working, meet-ups with friends or just hanging out.

While Full Bloom is no doubt a focal point in Downtown Garner, there are a lot of other exciting things in the works for the historic district including:

A Main Street is an integral component of any town that wants to maintain its "hometown feel" while supporting local business and creating a place for residents to eat, shop, play, live and work, Howe said.

"Downtown revitalization is a proven strategy for achieving those goals," she said. "Downtowns hold our community history close and provide the ideal backdrop for building new memories. They provide that important space that melds a community's history with its hopes for the future."

This article was written for our sponsor, the Town of Garner