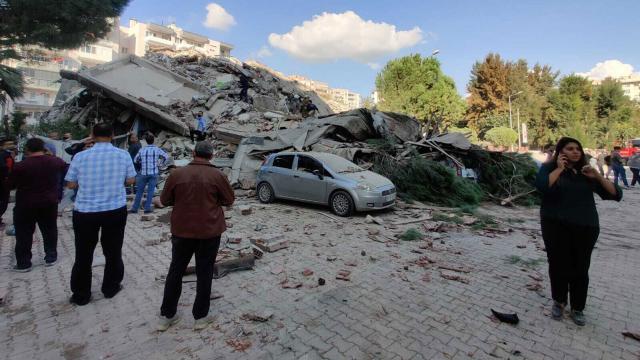 CNN — At least 27 people were killed in Turkey and Greece when a powerful earthquake hit the Aegean Sea on Friday afternoon, sending buildings crashing down and triggering what authorities have called a "mini tsunami."

Officials said 25 people were killed in coastal areas in Turkey's west, while two teenagers -- a boy and a girl -- died on the Greek island of Samos after a wall collapsed on them.

In Turkey, at least 20 buildings in the city of Izmir alone were destroyed, Mayor Tunc Soyer told CNN Turk. Images showed vehicles crushed under the buildings and people digging through the rubble in search of survivors.

At least 804 people have been injured in Turkey, said the country's disaster agency. Dozens were saved by rescue teams using diggers and helicopters to search for survivors.

A total of 470 aftershocks have been recorded, 35 of which were over 4.0 magnitude, the agency added. Search and rescue operations remain under way in eight buildings, while operations have been completed in nine other buildings, the disaster agency said.

Turkish President Recep Tayyip Erdogan said that among Turkey's injured, five people were being operated on and eight were in intensive care.

TV footage showed water flooding through the streets of Cesme and Seferihisar in parts of Turkey's wider Izmir province, as well as on the Greek island of Samos, in what officials described as a "mini tsunami." No tsunami warnings were issued.

Idil Gungor, who works as a journalist and runs a guesthouse in the Turkish town of Siğacik in Izmir province, said that the area was damaged more by the force of the water than the quake itself.

Her guesthouse, in a 100-year-old building, had been inundated and fish were swimming inside it, she said. Shops in town have also been flooded and their goods damaged.

"Everybody is calm but shocked and we're wondering what will happen, if there's a second tsunami coming or not," Gungor said.

Zeki Soysal, also a resident in Izmir province, told CNN Turk that he made it out of his office building just before it collapsed.

"There was an older woman in the building but we saved her, she got out. There is another building close to this building. They are continuing to try to get the people out," he said.

The United States Geological Survey (USGS) measured the tremor's magnitude at 7.0, while Turkish authorities said it was 6.6. The quake struck 14 kilometers (8.7 miles) northeast of the town of Néon Karlovásion on Samos, the USGS reported, at 1:51 pm Greek time (7:51a.m. ET).

But it hit at a relatively shallow depth of 21 kilometers (13 miles), the USGS reported, making its impact powerfully felt at ground level around the epicenter.

Authorities in both countries have reported dozens of aftershocks. Izmir Governor Yavuz Selim Köşger called on residents to stay off the roads and refrain from using mobile phones unnecessarily so that emergency vehicles could reach affected areas and response teams could communicate effectively.

In Greece, Samos Deputy Mayor Giorgos Dionisiou told Greek media that some old buildings had collapsed on the island.

People have been told by Greek authorities to stay away from the shore and buildings, and to be on alert for high waves as aftershocks continue.

Greece, France reach out to Turkey

Greek Prime Minister Kyriakos Mitsotakis said on Twitter he had spoken to his Turkish counterpart. Tensions between the two nations have flared recently over energy claims in the eastern Mediterranean.

"I just called President @RTErdogan to offer my condolences for the tragic loss of life from the earthquake that struck both our countries. Whatever our differences, these are times when our people need to stand together," Mitsotakis wrote.

In a tweet, the Turkish president offered his condolences to Greece and said "that two neighbors show solidarity in difficult times is more valuable than many things in life."

"Turkey, too, is always ready to help Greece heal its wounds," Erdogan added.

According to Erdogan, both Turkey and Greece were ready to send aid to the other.

French Interior Minister Gérald Darmanin said on Twitter his country had offered to send assistance to Turkey and Greece.

"France stands alongside the Turkish and Greek peoples in facing this terrible ordeal," Darmanin said.

"If the governments of these countries so wish, French aid can be immediately sent to the scene."

The leaders of France and Turkey have recently traded barbs over freedom of speech and Islamist extremism, following the killing of a Paris teacher who had shown his students cartoons of the Prophet Mohammed by the magazine Charlie Hebdo.

Erdogan has not publicly responded to the French interior minister's tweet.

He earlier tweeted, "Get well soon Izmir" after the quake hit.

"With all the means of our state, we stand by our citizens affected by the earthquake. We took action to start the necessary work in the region with all our relevant institutions and ministers," Erdogan wrote.

The President of the European Parliament, David Sassoli, tweeted, "My thoughts are with all the Greek and Turkish people affected by the strong earthquake that hit the Aegean Sea.

"Together with the other EU institutions, we are following the situation closely. The EU stands ready to help."