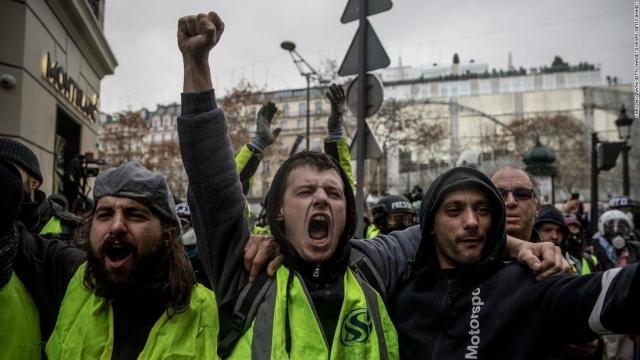 (CNN) — French President Emmanuel Macron said Monday that the minimum wage will be raised and that new taxes on pensions would be scrapped as he responded to weeks of violent protests which have challenged his leadership.

In a televised address to the nation, Macron said the violent protests -- which have morphed from a grassroots movement against fuel tax hikes to disparate demonstrations against his presidency -- have been "unacceptable" and "will not be in any way indulged."

But he proposed several social reforms, including an increase in the minimum wage by 100 euros ($113) a month beginning in January 2019 and a promise that overtime hours will not be taxed. Macon also remained defiant and said he would not reinstate the wealth tax but will fight tax fraud.

While Macron conceded that much of the anger that protesters feel is "just" and that people had "legit concerns," he condemned the violence which arose during the protests -- including cars being set afire and property vandalized.

"No anger justifies attacking a policeman or pillaging a public place or shop," he said. "When violence breaks out, freedom is lost."

Macron added that the discontent comes from "40 years of malaise" but acknowledged his government has not been able to respond to it properly in the 18 months it had been in power. He said he assumed his responsibility for that.

"We are at a historical changing point in the history of our country," Macron added. "Through dialogue, respect, commitment we will succeed ... My concern is only you, our only battle is for France."

There were disruptions in up to 120 schools across the country -- including 40 schools completely blockaded by students -- a spokeswoman for the Education Ministry said.

The students were demonstrating against the government's recent education reforms, including changes to university admissions, which they say will be more selective.

Macron is expected to call for national unity this evening in the wake of "gilets jaunes" -- or "yellow vests" -- protests that saw 1,709 people held in custody following the most recent weekend of demonstrations.

This weekend's protests were smaller than in previous weeks. But they also saw more people taken into custody than in all three previous weekends combined, according to the Interior Ministry.

Overall, the weekend's protests, which stretched as far and wide as the southern cities of Marseille and Toulouse, brought out 136,000 people across the country, the ministry added.

The protests paralyzed Paris, with landmarks such as the Eiffel Tower closed to the public and some metro stations shut. Sporting events across the country were called off.

In response, around 8,000 police were put on the streets of Paris and tens of thousands more deployed across the country. Officers fired rubber bullets and hundreds of canisters of tear gas at the demonstrators, some of whom set vehicles on fire.

A 'catastrophe' for French economy

The French retail sector has suffered a loss in revenue of about $1.1 billion since the beginning of the yellow vest protests last month, according to Sophie Amoros, a spokeswoman for the French retail federation.

On Sunday, Finance Minister Bruno Le Maire went as far as to say the unrest was creating a "catastrophe" for the French economy.

The protests, named after the yellow high-visibility jackets French motorists must carry in their vehicles, began as a small movement in rural France against a new eco-tax on fuel that demonstrators felt would push their budgets over the edge.

In response, Macron was forced to suspend the tax hike, which had been due to come into effect on January 1.

Despite Macron's concession, the movement has since expanded into a protest of many colors -- from people demonstrating against unsafe housing conditions, to students unhappy with education reforms, and anti-immigration campaigners.