Lynda Loveland: We came, we saw, we Disneyed

We earned our first set of mouse ears. We spent six days in Orlando, one day at SeaWorld, one at Discovery Cove and one at each of the four parks of Disney World.

It was an ambitious schedule, but we did it. Surprisingly we didn’t have any huge kid meltdowns, a bonus in my book.

The advice you all gave me was spot on! We took a case of water, five cheap ponchos and we zigged when the crowd zagged. Worked like a charm!!! The ponchos were especially handy when we saw Shamu and sat in the splash/tsunami zone.

Here are some of the highlights:

The laser light show and fireworks at the castle in Magic Kingdom were spectacular. Everyone left after that, so we jumped on a bunch of rides. Got home late, but it was fun! My tomboy, eight-year-old daughter did NOT appreciate being called a "princess" everywhere. My five-year-old daughter beamed. I took her to a character dinner with Cinderella and all her friends which she LOVED! The restaurant is 1900 Park Fare at the Grand Floridian Resort.

The safari at Animal Kingdom was way cool. The kids loved driving out in a Jeep among the animals. The Tree of Life … way cool. My daughter, Campbell, bought an African drum much to the delight of our neighbors, who now awaken on the weekend to the sounds of tribal music.

After two days at Disney World, we swam with the dolphins at Discovery Cove. They pulled us across the pool and we sealed it with a kiss! Than we snorkeled at the reef with tons of amazing tropical fish and huge sting rays, barbs removed.

Epcot has a great ride called Soarin'. It’s one of those experience rides. You feel like you’re on a hang glider, gliding along a river, skiing down a mountain or skimming the waves. Kinda messes with your head a little bit, but it was fun.

We finished at Hollywood Studios. We all loved the Star Wars ride. The one thing everyone told us was to get Fastpasses to Toy Story right away. Boy, you all weren’t kidding. Thank goodness we did, because they were gone in a flash. You gotta love interactive rides! The important thing is, I beat my husband's score!! 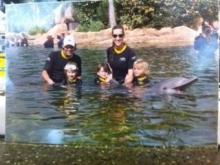 Disney rocked! We’ll be going back. Big thanks to Nancy Swope for planning it. She took a huge load off my mind.

We drove straight home after Universal. Got in around 1:30 Saturday morning. Slept a little then woke up to go to three soccer games.

Ahhh, it’s good to be home.

Lynda is the mom of three and co-host of Mix 101.5 WRAL-FM's Bill & Lynda in the Morning. Find her here on Thursdays.