Lumberton police mourn officer killed while investigating crash on I-95

Lumberton, N.C. — A Lumberton police officer died after being struck by a vehicle while investigating a traffic crash Saturday morning, the police department said.

Officer Jason Quick, who had only been on the Lumberton police force for about a year and a half, was dispatched to a multi-vehicle crash on Interstate 95 Northbound at 6:10 a.m. Saturday.

While investigating the crash, near exit 22, Quick tried to walk from the northbound inside lane to the right side shoulder. He was struck by a 2017 Hyundai at 6:53 a.m., authorities said.

He was taken to Southeastern Regional Medical Center, where he died. He was 27.

Lumberton police Maj. Tommy Barnes said it was a terrible loss for the department.

"He was a great officer," Barnes said. "It's tough. It is really tough" dealing with the fatal accident.

The State Highway Patrol identified the driver of the Hyundai as Kadejera Inman, 24, of Fairmont.

Later Saturday morning, at least 15 State Highway Patrol troopers were on the scene. An accident recreation team had a drone flying above the highway. After traffic was detoured between exits 20 and 22, all lanes reopened before noon. 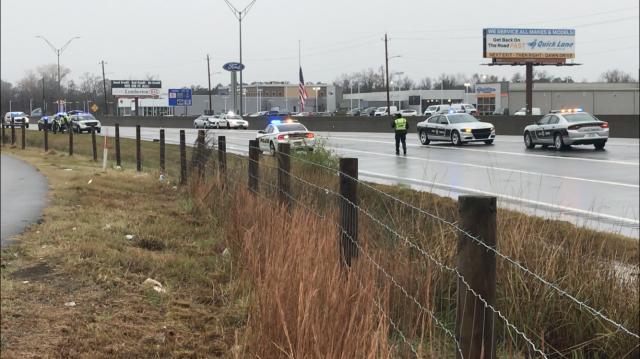 The Highway Patrol and the Robeson County District Attorney’s Office were contacted to investigate the crash.

It was not immediately clear if the driver who struck the officer would be charged in connection with the incident.

Edward Oxendine attends church with the officer, his wife and two kids.

"I am sad for him and his family," Oxendine said. "Especially (for) the children, and it is right here at Christmas time."

Barnes said the fallen officer had the talent to go far.

"I saw a lot of great potential with him," he said. "He loved his job and he was good at it."