Lukashenko's surprise inauguration is a 'thieves' meeting' and a 'farce,' Belarus opposition says 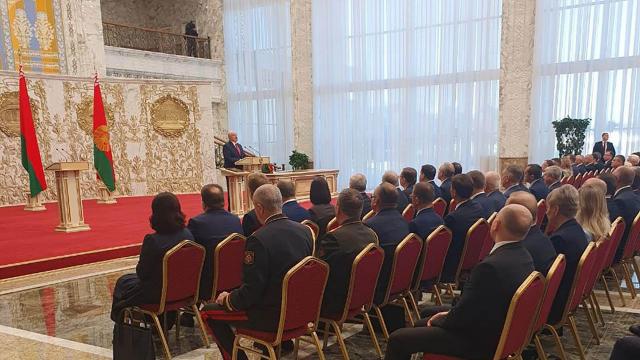 The country's state press service released images of the unannounced ceremony, which took place in the capital, Minsk, on Wednesday. No prior notice was given of the event, which took local journalists and opposition activists by surprise.

Opposition politicians described the ceremony as a "thieves' meeting" and a "farce."

Lukashenko was declared the landslide winner of the vote in August, but opposition figures have publicly accused him of rigging the poll, and have since disappeared from the country.

Tens of thousands of protesters have also taken to the streets in mass demonstrations across Belarus for weeks.

Opposition candidate Svetlana Tikhanovskaya, who is coordinating the protests from exile in Lithuania, said that "this so-called inauguration is, of course, a farce."

"Lukashenko's attempt to preserve his legitimacy only points to the fact that his previous authority has ended, but Belarusian citizens did not give him a new mandate," Tikhanovskaya posted on her Telegram feed.

"Under the protection of riot police, in the atmosphere of secrecy, in a narrow circle of hastily brought officials. Where are the jubilant citizens? Where are the diplomatic corps? To be honest, it looks more like a thieves' meeting for the coronation of another thief-in-law," Latushko wrote on social media.

Lukashenko, who has been in power since 1994, assumed the office for his sixth consecutive term after taking an oath, state press service Belta reported.

The ceremony took place in the Palace of Independence and several hundred people were invited, according to the press service.

Belta said that senior officials, deputies of the House of Representatives, heads of state bodies, scientists, culture and sports figures were invited.

Over recent weeks, Lukashenko and the Belarusian state security apparatus has been forcibly removing from the country or detaining leading opposition figures.

Meanwhile, demonstrations have continued across the country, particularly at weekends. On Saturday, 430 people were detained in protests across the country, according to the Interior Ministry. Of those, 415 were in the capital Minsk. Some 385 people had been released as of Sunday morning, the Ministry said.