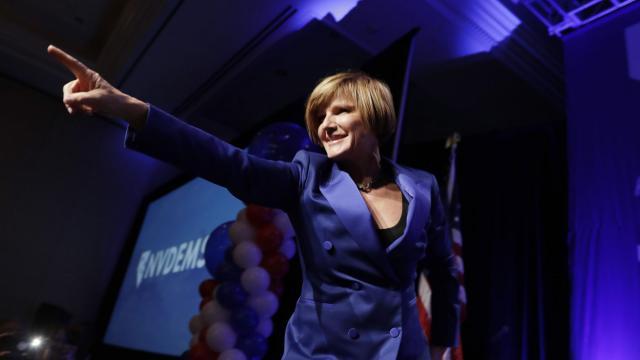 Lucy McBath, the gun control and racial justice activist whose son was killed in a 2012 shooting, is now headed to Congress, after winning a razor-thin election decided Thursday morning.

McBath defeated Republican incumbent Karen Handel, who only last year won a closely watched special election in the same Georgia district. Though Handel did not concede the race until Thursday morning, McBath, who is also a former Delta flight attendant, claimed victory in a statement released Wednesday. The Associated Press officially called the race for McBath on Thursday morning, with her lead at just under 3,000 votes.

“Six years ago I went from a Marietta mom to a mother on a mission,” she said, referencing her teenage son’s death. Jordan Davis, McBath’s son, was 17 when he was shot and killed by a white man at a gas station after refusing to turn down the volume of the rap music playing in his car. The man was later convicted of first-degree murder.

The win furthers the advantage in the House for Democrats, who could see more gains in several still-too-close-to-call races across the country. The district, once held by Newt Gingrich, was initially thought to have been out of reach for Democrats, but tightening polls in the campaign’s final weeks pushed the National Republican Campaign Committee, the House political arm, to run several new advertisements in the district in support of Handel.

“It is clear I came up a bit short Tuesday,” Handel said Thursday morning. “Congratulations to Representative-Elect Lucy McBath and send her only good thoughts and much prayer for the journey that lies ahead for her.”

McBath was once thought to be a long-shot candidate even among members of her own party, and had even first planned to run for state or local office. Now, she will be the first nonwhite person to represent Georgia’s 6th District, a section of the state overwhelmingly filled with white and affluent voters.

“At the end of the day, whatever you think about me; whatever happens or whatever I become in the future, I’ll still always be Jordan’s mom,” McBath said during a campaign event last month.

Her win defies conventional wisdom of how minority candidates must campaign in order to gain traction in districts predominantly composed of white voters. While some had advised McBath to dilute the most explicit parts of her son’s murder, she believed it was integral to telling an authentic story about her life and experiences, she said.

During stump speeches on the trail, McBath would invoke the name of Trayvon Martin, the teenager killed in Florida whose death spurned legions of black activism. She also said, “I’m risking my son’s legacy for the people of this district.”

“What I’m doing today is still mothering his legacy,” McBath said last month. “I’m extending what I would do for my son to my community.”