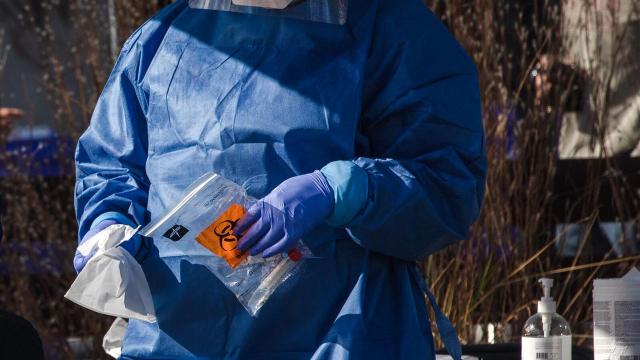 CNN — Lowering Covid-19 cases across the US is critical not only to preventing another surge fueled by variants -- but it also makes vaccines more likely to continue working against mutations, one expert says.

"The best thing we could possibly do to improve the chances that the vaccine will continue working ... is to reduce cases as much as possible without having those reductions occur as a result of vaccine-derived immunity," Dr. Michael Mina, an epidemiologist and immunologist at the Harvard T.H. Chan School of Public Health, said Tuesday.

The US on Tuesday reported more than 59,500 new Covid-19 cases -- a far cry from six-figure case totals a month ago. But experts warn these infection numbers are still high and could lead to another uptick if Americans let down their guard.

This is why measures like masks and social distancing continue to play a key role, because if the virus continues circulating at high levels, it will likely more often come into contact with, and try to infect, people who have been vaccinated, Mina said.

Scientists have identified several variants circulating in the US and are particularly worried about the B.1.1.7 strain, highly contagious and first detected in the UK. One study found cases of the variant are rapidly increasing across the US and significant community transmission may be occurring.

More than 1,270 cases of the variant have been reported across 41 states and Washington, DC, according to data from the Centers for Disease Control and Prevention. Roughly a third are in Florida, the CDC data show.

But the agency has said that likely doesn't represent the total nationwide and it has recently ramped up its genome sequencing efforts to identify variants.

Variants could lead to a rapid rise in the numbers of Covid-19 cases, according to two new CDC reports.

In one report released Wednesday, researchers from the CDC and the Minnesota health department detailed cases of the B.1.1.7 variant.

The CDC's Morbidity and Mortality Weekly Report described B.1.1.7 cases in specimens collected from eight Minnesota residents, ages 15 to 41, from mid-December through mid-January. Five reported Covid-19-like symptoms and three were asymptomatic.

Identification of the variants in Minnesota "highlights the importance of mitigation measures such as mask use, physical distancing, avoiding crowds and poorly ventilated indoor spaces, isolation of persons with diagnosed COVID-19, quarantine of close contacts of persons with COVID-19, and adherence to CDC travel guidance," according to the report.

In a separate CDC report also released Wednesday, researchers from Zambia described how the detection of the B.1.351 variant first identified in South Africa coincided with a rapid rise of cases in Zambia -- and this variant might have become the dominant strain there.

On Tuesday, Quest Diagnostics announced it was also sequencing tests to support the CDC's efforts to track mutations, adding that the company had already doubled the amount of genomic sequencing it started performing last month.

The US is also facing challenges on the vaccine front.

More than 39 million people have received at least the first dose of a Covid-19 vaccine, according to CDC data. About 15 million people -- roughly 4.5% of the US population -- have been fully vaccinated, the data shows.

Dr. Anthony Fauci told CNN on Tuesday it could now be early June before vaccines are available to the general population -- shifting the timeline from previous estimates around the end of April.

"That was predicated on (the Johnson & Johnson vaccine) having considerably more doses than now we know they're going to have," Fauci said.

CNN has learned that if it gets the green light from the Food and Drug Administration, the rollout of the Johnson & Johnson vaccine will be slower than officials initially expected.

The administration expects single-digit millions of doses for the vaccine if it's authorized for emergency use. However, due to a miscommunication over the production timeline, government officials thought that the number would ramp up to between 20 or 30 million doses by April. But now, they're expecting fewer than 20 million doses in April, an administration official told CNN.

Separately, President Joe Biden promised on Tuesday that 600 million Covid-19 vaccine doses would be available to the country by the end of July, "enough to vaccinate every single American."

The President's promise follows his announcement earlier this month that the US will have enough vaccines for 300 million Americans by the end of July, with the help of additional vaccine purchases the government made from Pfizer and Moderna.

Among the other difficulties the US is working to overcome is inequity in vaccine distribution, frigid weather and a short supply.

New York City officials said Tuesday they were working to combat Covid-19 vaccine disparities, building off of efforts that have focused on outreach to some of the region's hardest-hit communities.

But newly released data shows "the scale of the challenge in front of us," said Dr. Torian Easterling, first deputy commissioner and chief equity officer for the city's health department.

"There's much smaller proportion of vaccines going to Black and Brown New Yorkers. We see these geographic disparities bearing out as well," Easterling said, adding that the South Bronx, parts of Central Queens and Central Brooklyn, lag behind in vaccinations.

Meanwhile, the fierce winter storms that have unleashed frigid and dangerous weather conditions have now slowed vaccinations across the country.