Three million North Carolinians have responded to the 2020 Census, but the state's 60.3% response rate lags more than four points behind the national average.

Low census response rates put millions of federal dollars for infrastructure improvements, education and social service programs at risk. Census numbers also determine how many seats each state gets in Congress. Census counts are used at the state and local level to draw boundaries for the state legislature and for school districts. 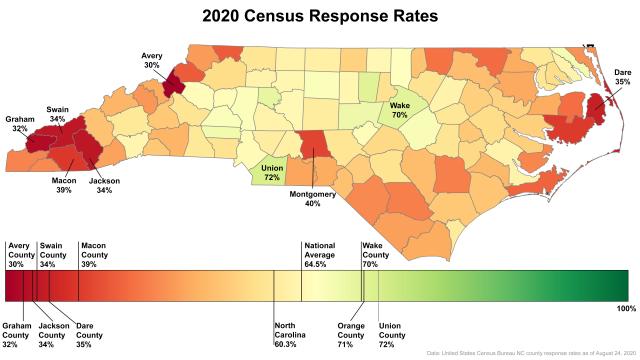 Responses are the lowest in western North Carolina, with two thirds of households not yet responding in Graham, Swain, Avery and Jackson counties. The numbers are similar on the Outer Banks, with only 35% of households in Dare County completing the census as of Monday, Aug. 24. 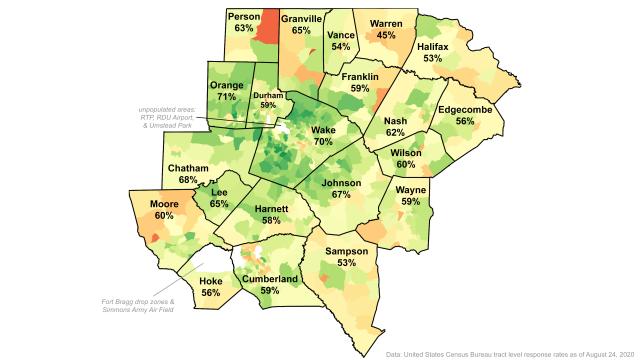 Response hasn't been much better here in central North Carolina.

Chatham, Johnston, Granville, Lee, Person, and Nash counties exceed the state average, but more than a third of households still have not been counted.

The Census Bureau tracks responses at several levels. Counties are broken into roughly neighborhood-sized census tracts. The top three tracts in North Carolina are all in Wake County.

Census tracts 530.05 covering the Lochemere area of Cary, 534.22 covering neighborhoods east of Bond Park in Cary, and 534.15 straddling U.S. Highway 64 in the Beaver Creek area of Apex each have response rates exceeding 90%.

Overall, more than 70% of households in Orange and Wake counties have been counted.

Everyone living in the United States and its five territories is required by law to be counted in the 2020 Census. Each questionnaire includes a dozen questions which focus on counting the people living in homes, apartments and mobile homes.

The Census Bureau is encouraging U.S. residents to fill out the 2020 census online using the unique code you should have received in the mail. If you don't have a code, you can still fill it out online using your street address or complete the questionnaire via toll-free phone in any of 14 languages plus TDD service for the hearing impaired.

If you've not heard from the Census Bureau, you will. Additional field workers were recently hired to collect remaining data before the September 30 deadline.