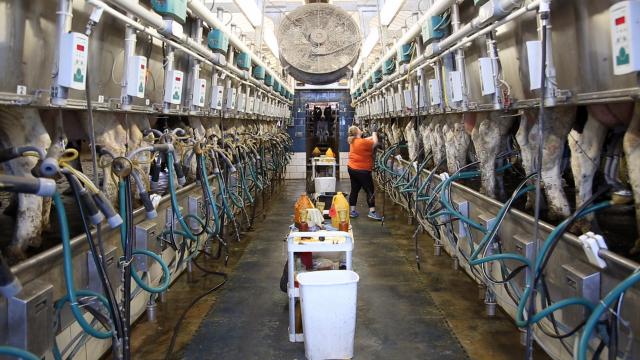 DAYTON, Ohio -- Low milk prices are increasingly forcing small Ohio dairy farmers out of business and third- or fourth-generation family farms are in danger of closing down.

Times are tough for dairy farmers to turn a profit, said Steve Buschur, who runs Buschur Dairy Farms in northern Darke County with three other brothers.

Prolonged low prices for milk have left farmers in the region and around the country feeling squeezed. In the past decade, there has been a 33 percent decrease in Ohio dairy farms. And in the past year, the number of farms has dropped from 2,237 to 2,405, according to the Ohio Department of Agriculture.

Buschur has about 670 cows milked three times a day -- a medium-sized dairy farm -- and said it has been hardest on the smaller farmers and the newer ones just getting started who have more debt.

"But I think it affects everyone," Buschur said.

The number of licensed Darke County dairy farms has dropped from 56 in 2014 down to 37 today.

"As dairies become more efficient they are able to produce more milk and as a result the prices do go down," said Sam Custer, extension educator with the Darke County Ohio State University Extension.

The price drop is good for consumers going to the grocery. Last week, the average gallon of milk was $2.94, compared to $3.68 a gallon 10 years ago.

"They (farmers) are extremely distraught with the price," Custer said.

Yet, in spite of the price decrease, consumers are drinking less milk. According to U.S. Department of Agriculture data, consumption has dropped 16 percent in the past 10 years.

Clarence Bunch, Central State University Extension associate director, said farmers are known for trying to make things work in any situation, but at these prices it can mean selling milk for less than the price it costs to produce it.

"When you're talking about a $10 difference, it's hard for the farmers to be profitable," Bunch said.

Farmers have found ways to be more efficient and produce more milk. For example, milk production used to slow down during hot months because of heat stress but now farmers can do more to control cow temperatures. And while dairy farms in general have gotten more efficient, there are also more large-scale, high-production farms with thousands or tens of thousands of cows, Buschur said.

"They have some efficiency benefits perhaps that the smaller farmers or medium-sized farmers do not have," he said.

Bill Hershberger said his family farm in eastern Miami County is down to about 20 dairy cows, and he went into teaching about 18 years ago so his three sons primarily run the farm, but they also all have different jobs.

He said the dairy farming lifestyle is not easy and it also can be hard in Miami County when there aren't a lot of other dairy farmers going through the same thing to talk to.

The prices farmers are paid have been steadily dropping since 2014 and as farmers continue to lose money or just break even, it's eating away at any reserves they might have.

Bunch said the market should eventually correct itself, whether from farmers leaving and supply eventually decreasing or demand increasing. But it's hard to be optimistic at the current time about improvements in the price paid to farmers.

The USDA's 2018 all-milk price forecast was down in April compared to March and there's also Canadian tariffs and looming trade issues that could make it more difficult to export the oversupply of milk.

Some Ohio dairy farmers are having to seek out new markets because Dean Foods, the second largest U.S. dairy company, beginning May 31, will cut its contracts with 100 independent conventional dairy farmers in Ohio and seven other states.

Buschur said while their dairy farm is more protected than smaller farms with high debt, they still aren't able to make farming equipment purchases and investments the same way they could if the price of milk was higher.

"There's just a lot of agri-business that is affected by the plight of the dairy farmer," Buschur said.

David Bair, with Bair-Trax Dairy in Troy, said as a certified organic farm they have been largely insulated from the price drops that conventional dairy farmers are seeing.

However, he said when conventional milk gets cheaper compared to organic milk, some shoppers that are not as committed to buying organic will switch to the lower-priced options which leads to an organic milk surplus.

"The price difference is so much that they are switching back to conventional milk," Bair said.

He said while it's not to the same extent as conventional dairy farmers, it has cut into their living expenses since the bills for the 85-milk cow farm still need to get paid even when their profits are reduced. While he has a tractor that still has payments, he's looked at whether it would be better to sell it and pay cash for a cheaper tractor.