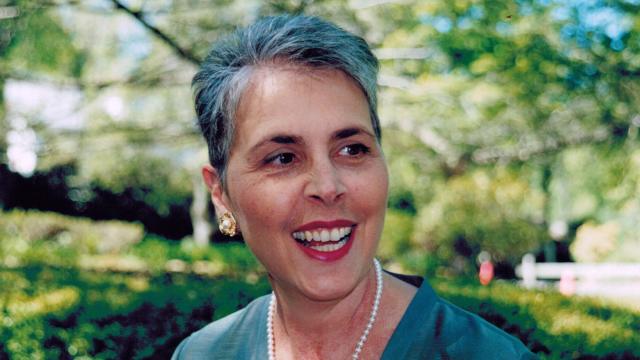 Louise A. DeSalvo, a Virginia Woolf scholar and memoirist who mined her Italian-American heritage for her books who once observed that life “is too short for even one bad meal,” died on Oct. 31 in Montclair, New Jersey. She was 76.

The cause was metastatic breast cancer, her husband, Dr. Ernest DeSalvo, said.

Louise DeSalvo taught writing and literature at Hunter College in Manhattan. Her “Virginia Woolf: The Impact of Childhood Sexual Abuse on Her Life and Work” (1989), was named one of the most important books of the 20th century by the Women’s Review of Books.

She was a feminist scholar and essayist, who also wrote about D.H. Lawrence, Henry Miller and Djuna Barnes, among others. She taught at Fairleigh Dickinson University in New Jersey from 1977 to 1982, when she became a professor of English and creative writing at Hunter.

DeSalvo also published memoirs with arresting titles like “Vertigo,” “Breathless,” “Chasing Ghosts” and “Crazy in the Kitchen: Food, Feuds and Forgiveness in an Italian American Family,” which was named a Book Sense Book of the Year for 2004.

She won the Gay Talese Award for “Vertigo,” her first memoir, which was also a finalist for Italy’s Acerbi prize for literature.

As a teenager, DeSalvo saw Hitchcock’s “Vertigo” 11 times in one week. She was “transfixed by the lead character’s fainting spells (which she too suffered) and by the image of woman-as-impostor falling to her death,” as the dust jacket put it. She felt the movie captured the confusion of her own working-class girlhood as a third-generation Italian-American, circumstances that eventually led her to write about her own life.

In “Vertigo,” she tells of initially writing in her diary almost nothing of the crises swirling around her — her sister’s suicide (in 1984), her mother’s shock treatments for depression, her father’s anger at her for not being emotionally available during these traumatic events and her own fainting spells, which she detailed in the book.

But she does entrust to her diary the details of the food, mostly Italian, that she loved cooking, though she also had a soft spot for French squash soup, oysters with Gruyère, and duck with orange stuffing and Cumberland sauce.

“Life, I have always believed,” she wrote in “Vertigo,” “is too short to have even one bad meal.”

Louise Anita Sciacchetano was born on Sept. 27, 1942, in Jersey City, New Jersey, to Louis and Mildred (Calabrese) Sciacchetano. Her father was a machinist for a towing company, and her mother was a homemaker.

Her early life was spent in the hardscrabble milieu of Hoboken, New Jersey, tenements, but in the postwar boom her family moved to a house in Ridgefield, a more suburban New Jersey town. There, she was mostly ashamed of her Italian grandmother, who lived with the family, though she later paid her lyrical tribute in writings such as “Crazy in the Kitchen.”

She graduated from Douglass Residential College of Rutgers University in 1963 with a bachelor’s degree in English. She married Dr. Ernest DeSalvo the winter after her graduation. At the time, he was a medical student whom she had known since high school.

In addition to her husband, her survivors include their sons, Jason and Justin, and two grandchildren.

She earned a master’s degree in 1972 and a Ph.D. in 1977, both in English from New York University. Her dissertation was on Woolf, who at the time in the late 1970s was gaining more attention, particularly among women in academia.

While DeSalvo became an influential Woolf scholar, she felt that she was not a natural match with that upper-crust author, noting at one point that there was no record of Woolf’s eating pasta on a visit to Italy. Yet, reading Woolf’s works, her diaries and her writings about her life led DeSalvo to delve into her own memories, including that of childhood sexual trauma involving a caregiver.

“As she started writing about intimate life experiences, Louise helped shape the burgeoning genre of the memoir into something that contained not only the deeply personal but also the larger cultural experience of Southern Italian immigrants in the United States,” Edvige Giunta, a close friend, said in a telephone interview. She is co-editor of “Personal Effects: Essays on Memoir, Teaching, and Culture in the Work of Louise DeSalvo” (2015).

As a student of writing, DeSalvo sought to demystify it in her mentoring of young writers and students. Long fascinated by the habits of successful authors, how they organized their days and the tricks they used to stay productive — she wrote for just three hours a day — she explored the practical side of her craft in a blog, “Writing A Life,” and in a book, “The Art of Slow Writing” (2014).

Writers have turned to her 1999 book, “Writing as a Way of Healing: How Telling Our Stories Transforms Our Lives,” for guidance in how to write about traumatic experiences. Drawing on the multiple traumas within her own family, including her sister’s suicide, her mother’s depression and her father’s post-traumatic stress disorder from his military service in World War II, she found a power in writing to promote healing. Writing, she often said, helped change the way she looked at the past.

“Writing as a Way of Healing” includes homegrown observations. For example, she described the stages she would go through when working. She could become so obsessed as she finished a book, which she called “the completion stage,” that her sons called this her “demented stage.”

As she wrote, “Jason tells friends he would come to me at my desk when I was finishing a book and say, ‘Mom, I’m bleeding to death.’ According to him, I would respond, ‘That’s nice dear, get yourself a snack. I’ll be with you in a minute.’

“I don’t think it ever happened,” she added. “Still, it has the ring of truth.”