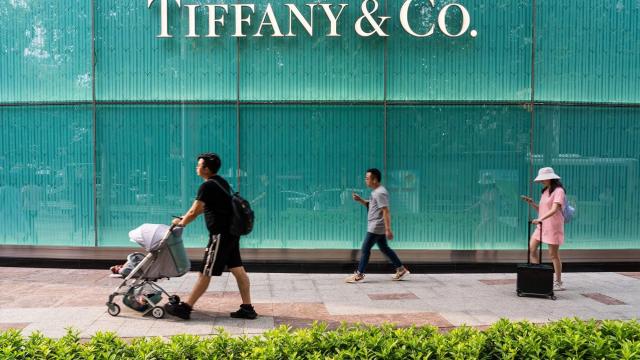 LVMH, which is run by billionaire CEO Bernard Arnault and owns brands such as Louis Vuitton and Christian Dior, confirmed its interest on Monday following media reports of an offer over the weekend.

The French fashion conglomerate said it held "preliminary discussions" regarding a "possible transaction" with Tiffany. "There can be no assurance that these discussions will result in any agreement," it added.

Tiffany confirmed Monday in a statement that it is reviewing an all-cash proposal from LVMH to buy the company for $120 per share. That's a premium of more than 20% over the stock's closing price on Friday.

Such a deal would value Tiffany at roughly $14.5 billion, but analysts believe there's a good chance that Tiffany holds out for a sweeter offer.

Oliver Chen, an analyst at Cowen, predicts that LVMH would need to propose at least $160 per share to secure a deal. Other luxury companies — such as Richemont, which owns Cartier — could make competing bids, he said.

"A takeover of Tiffany could make a lot of sense," analysts at Bernstein wrote in a research note. While it's one of the world's best-known luxury brands, analysts say it still has room to grow, particularly in jewelry and watches.

Cowen's Chen pointed to the company's strong brand as a "diamond and bridal authority," as well as its growth potential in China.

The deal would boost LVMH's presence in the United States, which accounts for about a quarter of its revenue. And it would bolster the French company's jewelry and watch lineup, which includes European legacy brands such as Bulgari, Hublot and TAG Heuer. As of January, the jewelry and watch unit only brought in 9% of overall revenue, according to a letter to shareholders.

LVMH is the world's biggest luxury group. The company is home to 75 different brands, and it has for years been the top seller of high-end goods, according to a Deloitte analysis published this year. Last year, the retail giant took in 46.8 billion euros ($51.9 billion) in revenue.

Tiffany has had a more complicated story. The company has long dealt with slumping sales, and in 2017 it replaced its CEO after disappointing financial results. Since then, it has been working to rebrand its image to attract more millennials — adding more products that are designed to appeal to young shoppers, rolling out more targeted marketing and revamping its historic flagship store in New York City to draw in more customers.

In the company's most recent earnings report in August, it said that global sales dropped 3% in the first half of this year. But it also said it enjoyed "strong growth" in mainland China, where the slowing economy has put pressure on the broader luxury sector.

An acquisition of Tiffany would be one of LVMH's splashiest deals to date. In 2017, the company took over Christian Dior for $13 billion, and last year it snapped up the ritzy Belmond hotel chain for $2.6 billion.

— Julia Horowitz contributed to this report.