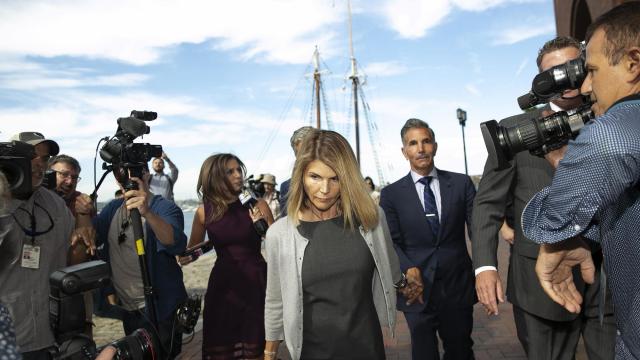 CAMBRIDGE, Mass. — At first, being the face of a national scandal seemed to slide off Lori Loughlin’s glamorous back.

Charged with conspiring to get her daughters into college by fraud, she maintained her innocence, signed autographs on her way into court and shook hands with the prosecutors as if she were taking a Hollywood meeting.

But as the months wore on, she became more somber. Gossip magazines reported that she was worried that she would face a lengthy prison term and that she regretted not taking an early plea.

On Thursday, prosecutors announced that Loughlin, the actress who was one of the highest-profile people charged in the nation’s largest college admissions prosecution, had agreed to plead guilty to conspiring to get her daughters admitted to the University of Southern California as crew recruits. Her husband, Mossimo Giannulli, a fashion designer, also agreed to plead guilty to a criminal count, the prosecutors said.

The agreement represented a victory for the prosecutors and, while the case is continuing, it put something of a capstone on a scandal that exposed just how far wealthy parents would go to get their children into college. The case, which involved cheating on admissions exams and bribing college coaches, increased scrutiny of the admissions process and contributed to a wave of promises of change, including some schools no longer requiring students to take the SAT.

At the same time, the announcement of Loughlin’s plea highlighted how much the world had changed since her arrest, and that of dozens of other parents and coaches, more than a year ago. Now many colleges are struggling to survive, and students are wondering when they will be able to return to campuses that were abruptly emptied this year because of the coronavirus pandemic. Roughly a dozen parents are still fighting charges in the admissions case. The first trial in the case is scheduled for October, but it is unclear how it will proceed given the virus.

Under the terms of the agreement, which still needs approval by a judge, Loughlin, 55, would serve two months in prison, and Giannulli, 56, would serve five months. The sentences imposed on other parents convicted in the case have ranged from no prison time to nine months in prison.

A lawyer for Loughlin and Giannulli declined to comment.

Prosecutors accused Loughlin and Giannulli of paying $500,000 to get their two daughters designated as recruits to USC’s crew team to ensure their admission to the school, despite neither daughter actually participating in the sport. Prosecutors said that Loughlin and Giannulli worked with a college consultant, William Singer, whom prosecutors have described as the mastermind of the admissions scheme and who has pleaded guilty to racketeering and other charges.

Loughlin was one of two Hollywood actresses ensnared in the admissions case, in which more than 50 people have been charged. The other actress, Felicity Huffman, who was accused of paying Singer to inflate her daughter’s SAT score, took a different route from Loughlin, agreeing to plead guilty within a month of her arrest and publicly expressing remorse. A judge sentenced her to 14 days in prison, and she ultimately served 11 days in a minimum-security federal prison camp in the San Francisco Bay Area.

As a result of her early guilty plea, Huffman was able to put the case behind her and has enjoyed relatively forgiving news media coverage, with the U.S. attorney behind the case complimenting her by saying she handled her plea in “a very classy way.” At the same time, prosecutors ratcheted up the pressure on Loughlin.

In recent months, prosecutors released photographs of Loughlin’s daughters posing on rowing machines that were taken as part of the scheme to present them as rowers, as well as a fake crew resume put together for her younger daughter, Olivia Jade Giannulli. In an interview in October on WCVB, an ABC affiliate in Boston, the U.S. attorney for the district of Massachusetts, Andrew Lelling, warned that his office would ask for a longer sentence if Loughlin went to trial and were convicted than if she pleaded guilty.

“If she’s convicted, I don’t think I’m giving her any state secrets by saying we would probably ask for a higher sentence for her than we did for Felicity Huffman,” Lelling said.

Loughlin, who is best known for playing Aunt Becky on the 1990s sitcom “Full House,” has lost acting work. The Hallmark Channel, where she had roles on a show and a television movie series, said immediately after her arrest last year that it would no longer work with her. After her arrest, she did not appear in the final season of “Fuller House,” a Netflix reboot in which she had had a recurring role. It was uncertain whether the timing of Loughlin’s guilty plea — during a pandemic — might affect her sentence. The virus has spread rapidly in some prisons, and that has affected cases including the college admissions prosecution. Two parents in the case were released from prison early because of the pandemic, while other parents have had their report dates postponed.

While all of the parents charged in the case were subject to public scorn, Loughlin and her daughters were often singled out. It did not help that, before her parents’ arrest, Olivia Jade, a social media influencer, had posted a video in which she breezily acknowledged that she did not care about school and was going to college only for “gamedays, partying.”

Olivia Jade and her sister Isabella were both enrolled at USC when the charges were announced — Olivia Jade as a freshman and Isabella as a sophomore. USC said in October that the two women were no longer enrolled, though it was not clear if they had been dismissed or permitted to withdraw. USC had said earlier that it was investigating nearly three dozen students for admissions violations in connection to the scandal.