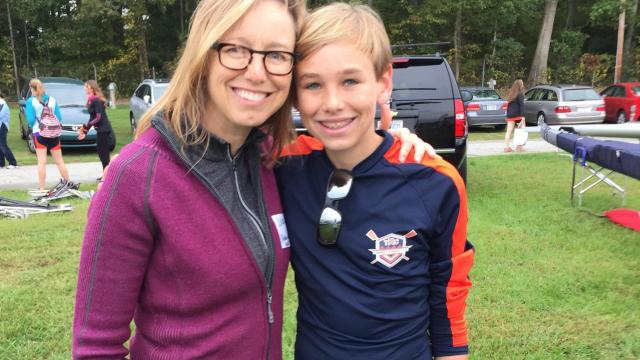 As a high school student with dyslexia, Aidan Colvin, a 16-year-old rising junior from Raleigh, knows he's not alone.

As many as 13 million students in the United States have dyslexia, a neurologic disorder that can make reading difficult. The impairment causes many dyslexics to struggle in school and, ultimately, fail. But, after Colvin was diagnosed, he also learned that there are many with the disorder who live a life of achievement and success. Comedian Jay Leno, Arctic explorer Ann Bancroft and writer John Irving are among them.

So, he decided to write to them and others with dyslexia. Their replies turned into a book, which made it to the very top of the children's biographies ranking on Amazon.com this week. "Looking for Heroes: One Boy, One Year, 100 Letters," is written by Colvin, along with his mom, Liisa Ogburn, a writer.

I checked in with Colvin by email to learn more about the book, why he wrote it and what he learned.

Go Ask Mom: What spurred you guys to write the book? How did you come up with the idea?

Aidan Colvin: I was telling my mom I was a little nervous about starting at a new school. I was nervous because it would mean explaining to all my teachers that I was dyslexic and would need some extra help. I was also nervous because I knew it was a STEM school and didn't play my strengths. I moved there because it was a small school and in small school, you get to know the teachers and because of this, they're more likely to go the extra mile to help you. Back to your question, we were standing in my room and my mom looked over at a poster we had made years ago with pictures of successful dyslexics. She wondered aloud, "How did they 'make it?'" And I said something like that they were probably smarter. She said, "why not ask them?" So I did.

GAM: When you started writing letters, did you expect anybody would answer back? What was it like getting that first response? Who did it come from?

AC: We didn't expect anyone to answer. My first list only had pretty famous people whose addresses were impossible to find. But then I got my first response. I cannot tell you how ecstatic I felt. It felt unreal. It was from Dr. Delos Cosgrove, a surgeon who was also CEO of The Cleveland Clinic.

AC: I hoped they would give me some simple key that would make high school possible. Dr. Cosgrove said that the key was hard work. And he wasn't the only one. But he also said, "Dyslexia is an advantage in that it also makes you think more creatively." I learned that because school assignments often don't come easy to me, I am always having to figure out how I can do them. It forces me to think outside the box.

GAM: In the book, Aidan shares some tips that have helped him succeed in the classroom? Can you share one or two here?

AC: In the book, I share some low tech and high tech tips. Some simple low tech tips are to use a colored sheet of paper under each line of text as I read. It kept my eyes from jumping around on the page. I also use graph paper to help me keep my numbers in line in math. For high tech, I use dictation all the time -- to dictate text messages, papers, test answers. It doesn't always write what I intend and the book shares some funny mistakes.

GAM: Tell us about one or two fun experiences that were part of the experience of writing the book? Did Aidan get to meet Leno?

AC: I wrote some people several times. I wrote Jay Leno three times asking if I could meet him when he performed in North Carolina. I never heard back. But Bill Kirby, a writer for the Fayetteville Observer, heard about my project and got me in to meet Jay before his show. I can't even tell you how excited I was. We talked. I gave him a rough draft of my book. He gave me his hat from The Tonight Show. The next day, my mom picked up our home phone and heard, "Jay Leno here. Is Aidan home?" You'll have to buy the book to hear the end of that story.

GAM: What lessons do you hope readers will take away from the book - especially kids with dyslexia and their parents?

AC: What lessons? First of all, that you're not alone. Second, that you can achieve your dreams -- not only in spite of your dyslexia, but maybe even because of it.

"Looking for Heroes" is available on Amazon.