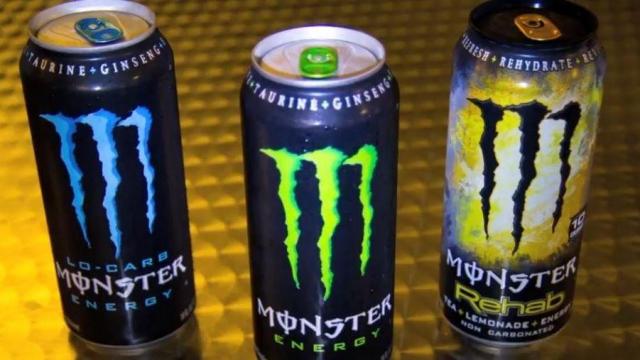 A lineup of new products, low prices and NASCAR, BMX, UFC and MMA sponsorships have contributed to Monster's boom.

Monster has become the top energy drink maker in the United States, controlling 43% of the market, according to Morgan Stanley. Red Bull trails slightly. Rockstar is in third place.

While soda sales have steadily declined as more Americans put down sugary drinks in favor of healthier choices, energy products are bucking the trend.

Retail sales in the United States have spiked 25% since 2012 to $11.7 billion last year, according to Euromonitor.

Analysts say consumers are willing to buy highly-caffeinated drinks, which are pricier than sodas, because they provide a pick-me-up.

Monster also offers a better bang for energy drinkers' buck, noted Stifel analyst Mark Astrachan. A 16 oz can of Monster is the same price as a 8.4 oz can of Red Bull.

Privately-held Red Bull more-than-doubled Monster's sales in 2016, according to Astrachan, but Wall Street is buzzing about Monster's rise.

Revenue has grown every year since Monster launched in 2002, topping $3 billion in 2016.

Several analysts raised their share price targets on the company this week, leading Monster's stock to hit an all-time high. Shares gained 52% in 2017 and the company has a $37 billion market value.

"There isn't another stock in our coverage universe with a comparable current growth profile," Credit Suisse analyst Laurent Grandet wrote in a research note Wednesday.

Grandet predicts Monster's international business will make up 36% of the company's total sales by 2019, up from 24% today.

Coke took a 17% stake in Monster for more than $2 billion and the two companies swapped drinks -- Coke sold Monster its NOS and Full Throttle drinks in exchange for Monster's non-energy products.

The agreement made sense for Monster because it got access to Coke's enormous distribution network around the world.

Monster launched in China, the second largest energy drink market in world, in 2016 and is "just getting warmed up" there, Wells Fargo's Bonnie Herzog wrote in a note Thursday.

Competitors and international expansion are not Monster's biggest concerns though.

Energy drinks face tough regulation. New taxes on sugary drinks, such as the one adopted in the U.K., can derail the industry.

The World Heath Organization has also said they "may pose danger to public health," while the American Academy of Pediatrics said children should not consume energy drinks.

In 2012, Monster tumbled 14% after the parents of a 14-year-old girl alleged Monster drinks were responsible for her death.

Monster denied any responsibility and added caffeine labels to its products the following year.