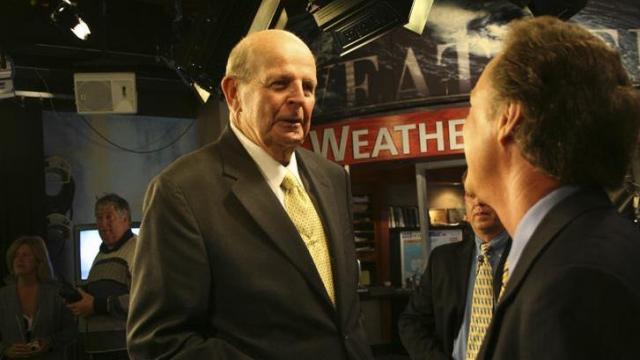 Raleigh, N.C. — Longtime WRAL weatherman Bob DeBardelaben, popularly known as “the biggest name in weather,” died Monday after a brief illness, according to his family. He was 88.

To many viewers and colleagues, DeBardelaben was larger than life.

“He has a great voice. He had great delivery. He had a great personality on the air, and I thought, man, this guy is really, he’s really good,” former WRAL and CNN anchor Bobbie Battista once said.

DeBardelaben had been a radio announcer and host of WRAL's "Dialing for Dollars" segments during afternoon movies when the television station asked him in 1976 to become a weather anchor.

“Bob was not a scientist, but he was a very good communicator, and I think Bob just made people feel good," said Jim Hefner, former WRAL general manager. "He always came on with that big smile and that big voice, and he was going to tell you to the best of his ability what the weather was going to be.”

Still, DeBardelaben readily admitted that he was geographically challenged.

“I didn’t know where Nebraska was. I didn’t know where Iowa (was) ... I knew North Carolina and South (Carolina)," he said. "One afternoon, before I went on the air, I went and took a pencil, and I went on the bottom, right-hand corner of every state. And I wrote 'IA' for Iowa, so I could stand up and say, 'Well now, here is the front coming down through Iowa.'”

He said his most memorable moment on the air was doing the weather from a platform near the top of WRAL’s 2,000-foot transmission tower.

DeBardelaben never took himself too seriously.

“I don’t think many people can say they enjoyed their life as much as Bob DeBardelaben," Hefner said. "Being on TV was fine, but not being on TV was just fine, too.”

In addition to weather reports, DeBardelaben voiced the sign-off announcements that WRAL ran at the end of each day – in the days before 24-hour broadcasting – as well as promotions for wrestling matches, which were staged in WRAL's studios.

In the 1980s, WRAL started making the move to meteorologists, bringing in Greg Fishel to back up DeBardelaben’s weather reports with science.

"He embraced that," Hefner said of DeBardelaben. "A lot of people might have seen that as a threat. He embraced it, and quite frankly, it probably kept his career going for a number of years.”

DeBardelaben retired from WRAL in 1989, but fans across the Triangle continued to recognize him for years whenever he went out in public.

“Somebody will come up and say, 'Are you Bob Debardelaben?' And my stock answer is, somebody asked Bette Davis one time whether she was Bette Davis, and her answer was, 'Well, I used to be.' So that’s my answer, 'Yes, I used to be.'”

DeBardelaben is survived by his wife, Carole, daughter, Allison, and son, Dean. A memorial service has been scheduled for Wednesday at 2 p.m. at White Memorial Presbyterian Church, 1704 Oberlin Road in Raleigh. Visitation will follow the service.

Plenty of fans are sharing their memories of #BobDeBardelaben on social media.