It’s no longer chilly and dark when leaving work in the early evenings, so why not enjoy new beers from Triangle-area breweries that pair well with the shift in the season?

Springtime styles such as Irish Stouts, Maibocks, Saisons and Wheat Beers are blossoming throughout the region, and many are likely to stick around into early summer. Shed the heavy coats, leave the socks at home and cure your Seasonal Affective Disorder with these fantastic seasonal beers at your local brewery, bar or bottle shop.

Big Boss Brewing Co. - D’Icer (Dunkelweizen | 5.5% ABV) – "D’Icer is a copper-colored Dunkelweizen in the Munich tradition. It is made with over 50 percent wheat, Munich and Vienna malts to give it a remarkable color and richness. Bavarian yeast and just the right amount of Noble hops make this beer a great thirst quencher."

Monkey Bizz-Ness (Belgian Golden Strong Ale | 9.0% ABV) - "Monkey Bizz-ness is spiced to compliment the fruit, yeast and malt notes present in this complex, rustic, Belgian-style ale. The beer is aged for months to blend the bold flavors into a seamless presentation." 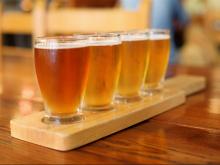 Bull City Burger and Brewery - Malbourne Maibock (Maibock | 7.0% ABV) - "The Malbourne Maibock is a lager in the traditional spring or "May" bock style. The spring bock is light in color like a Helles lager but a little higher in alcohol and emphasizes the pale malt flavors. The golden hue is clear with a distinctive Hallertauer hop nose of spice and light floral aromas. The malty body and moderate bitterness make for a thirst quenching, warm weather lager, full of character but not heavy in the mouth. Cereal grains, pale toast and a touch of malt sugar leaves one thirsting for more as outdoor temperatures rise."

Carolina Brewery - Bullpen Pale Ale (American Pale Ale | 5.1% ABV) - “The Bullpen Pale Ale was specially crafted for the Durham Bulls Athletic Park. The beer is crisp and mellow, with a soft maltiness, and balanced with a flavorful American hop character. This deep golden ale is the perfect thirst-quenching complement to a day at the ballpark or any occasion at all.”

Firecracker Pale Ale (American Pale Ale | 5.1% ABV) - “A special brew designed to quench a summertime thirst, this snappy pale ale is a true American classic. Firecracker is an easy-drinking beer that still packs a hoppy punch. It's a straw-colored ale made with the world's finest malts and carefully blended with America's uniquely flavored Cascade and Chinook hops.”

Carolina Brewing Company - Spring Bock (Maibock | 6.1% ABV) - “This is our 15th consecutive year of brewing this pale golden lager. It is a Maibock with a good amount of barley and a nice balance of hops that gives it a delightfully light taste with a background of sweetness. The beer is made with Pilsner, Munich, Carapils and Caramel malts and balanced with Hallertau hops.”

One Hop Rye IPA (American India Pale Ale | 7.2% ABV) - “This experimental seasonal IPA resulted from an agricultural shortage in both Amarillo and Centennial hops, used in the making of our year-round India Pale Ale, Rocket Science. The scarcity of hops led us to experiment with other less trendy/in-demand hops. We found a winner with Apollo hops. This rye IPA has notes of lemon and pine, accompanied by a slight tang from the North Carolina-sourced rye.”

LoneRider Brewing Co. - The Preacher (Saison | 7.3% ABV) - “The Preacher's sharp blue eyes have seen too many sins. This Belgian-style Saison is created with an American twist. It is a spicy, fruity ale with a bright citrus hop kick.”

Sex Viking (Dunkelweizen | 5.5% ABV) - “This is a wonderful Dunkelweizen with rich caramel and roasted fruit notes. Brewed with rye, it has a delicious warming spice with just enough alcohol to perk you up, morning or night!”

Top of the Hill Restaurant and Brewery - Blue Ridge Blueberry Wheat (American Wheat Beer | 5.1%) - “This is our most popular seasonal, and it earned a gold medal and was named "Best in Class" in the 2010 World Beer Championships in the flavored wheat beer category. We created Blue Ridge Blueberry several years ago thinking that we would run it for four weeks. It proved to be so popular that now, we run it for almost six months a year, tracking blueberry season from South America to the northern climes.”

Triangle Brewing Co. - IPA (American India Pale Ale | 5.7% ABV) - “Now released in a can, our IPA is unfiltered with a deep golden color and plenty of hops to balance out the malt. Make sure you pack a few of these IPAs in your cooler or backpack to enjoy at your favorite venue.”

Win Bassett is executive director of the North Carolina Brewers Guild and leads Social Media & Beer Education for All About Beer Magazine. He’s also a co-founder and freelance writer at NCbrewing.org and has contributed to Brewers Association, Southern Brew News, the News & Observer and WRAL. He is the interim secretary of the North American Guild of Beer Writers and a Cicerone Certified Beer Server. Follow him on Twitter at http://twitter.com/winbassett.