Elizabethtown, N.C. — Two months after Hurricane Florence made landfall, a logjam created from debris is still pushing against a major bridge in Elizabethtown.

Under the bridge, the water contains shattered trees and trash.

And debris has accumulated in the aftermath of the storm.

The logjam formed in the Cape Fear River at Elizabethtown and has raised concerns in the community about the safety of the bridge. 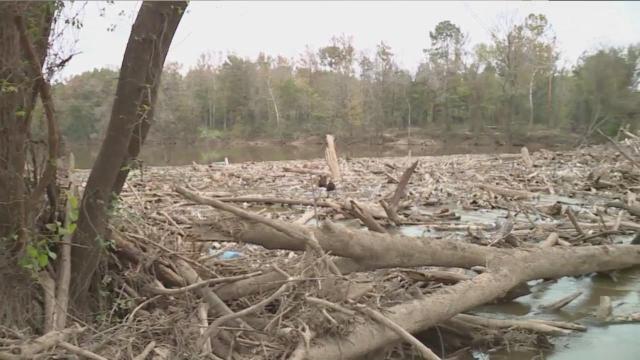 Higgs has lived in Elizabethtown for years and has never seen a storm of this magnitude.

"I'm shocked that it's as bad as it was, compared to all of the other hurricanes I've seen come through in the last 20 years I've lived here," Higgs said.

The state Department of Transportation is in charge of these bridges and is responsible for unclogging the jam.

A spokesman for the DOT stated that the agency doesn't think all the deadwood and debris caused serious damage to the bridge. But there's no way to know for sure until divers can go underwater to inspect it. So the bridge will remain closed until the debris is cleaned out.

Only then will it be safe enough for divers look over bridge supports.

The agency spokesman, Andrew Barksdale, said the cleanup is expected to wrap-up in December. The process will involve grinding the wood, taking the trash to the landfill and recycling the plastic bottles.

After the nearly 1.7 million dollar clean-up project is completed, the DOT is set to repair the so-called "fenders," these wooden posts that deflect debris from the bridge columns.

"Two weeks before the storm, this place was full of boats," Higgs said.

The DOT says the debris can't be loosened and sent downstream, that would only cause another logjam. Repairs to the bridge's fender system won't begin until next year, but the bridge would re-open to traffic before that, if DOT inspectors deem it safe.