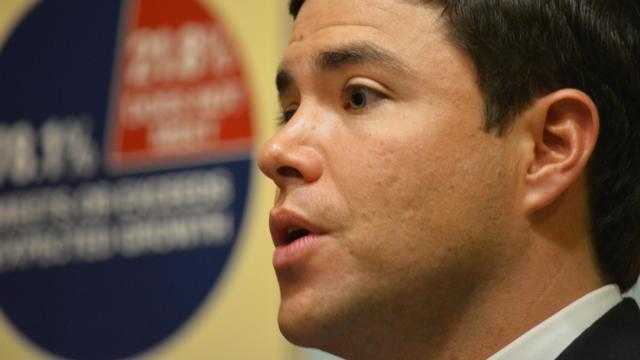 Raleigh, N.C. — One month after North Carolina Superintendent Mark Johnson claimed that more than 70,000 third graders were "improperly socially promoted" to fourth grade, local school leaders defended how they handle the students who struggle with reading.

The State Board of Education asked the local school leaders to speak at its meeting Wednesday so they could talk with Johnson about his claims. Johnson was out of town and participated by phone in the sometimes tense meeting that lasted late into the evening.

Johnson accused the State Board of approving policies that violate the state's Read to Achieve law, causing the students to be improperly promoted. Under North Carolina's Read to Achieve program, students must be reading at grade level by the end of third grade in order to advance.

"There was a law passed by the General Assembly. There were bureaucrats at the Department of Public Instruction who did not agree with that law," Johnson said. "And through policy they shifted what the law was intended to do, and that is the point of this conversation."

State Board member J.B. Buxton said he was concerned the superintendent was "impugning" former staffers and board members who worked on those policies and asked Johnson to focus on specific policy changes he wanted.

"I want to shift this to how we are supporting students and where the policy is, and I don't want to talk about whether there was rogue employees or whatever it might be," Buxton said.

Wake County Public School System Superintendent Cathy Moore said the retention versus promotion issue is an important one to discuss but "a preponderance of available research will tell you that whatever the grade level designation is attached to a struggling reader matters far less than what is done to support that student."

Mariah Morris, North Carolina's 2019 Teacher of the Year, said students who are promoted to fourth grade in Moore County, where she works, are given intensive support in transitional classes. She said principals and teachers look at various aspects of how students are performing when deciding whether to move them to the next grade.

"I think it would be very detrimental to take away the option to look at a student holistically when making that decision," she said.

Johnson said he plans to meet with a task force of local superintendents this month to continue the conversation.

"Yes, there is a conversation to be had about does retention work? That's a fair conversation we all need to be having," he said. "This is not something that we are expected to fix overnight. We’re going to do this in a productive manner that does not cause mass disruption across the entire state."

Senate Leader Phil Berger, R-Rockingham, who has been working on Read to Achieve for most of the past decade as his key initiative, responded to the discussion in a statement Thursday.

"Promoting a child to fourth grade who cannot properly read is one of the most harmful and cruel actions the education bureaucracy can take," he wrote.

"It's nothing short of malpractice and another example of the 'soft bigotry of low expectations,'" Berger added. "And to those who argue that disadvantaged students may be disproportionately held back under this policy: There is no better guarantor of intergenerational poverty than failing to educate a child. If a child cannot read properly by fourth grade, that child is significantly less likely to succeed. To ignore that reality is to risk that child's potential and perhaps sentence her to a lifetime of underachieving. It's cruel and it must stop."

The latest state data show only 56.8 percent of third-graders were proficient in reading last school year.

N.C. State released a study in 2018 showing the state's Read to Achieve program has had no gains for third-graders, with test scores showing little benefit for the first two cohorts of students in 2013 and 2014.

Researchers found the program was too focused on third grade and that having each school district implement the program led to inconsistencies from teacher skills to the type of summer reading camps offered.

Senate Bill 438, dubbed the Excellent Public Schools Act of 2019, was designed to modify the program for better results, including adding Individual Reading Plans for students testing below grade level to identify and focus instruction on areas where they're having difficulty. The legislation also called for the state to get more involved in planning local summer reading camps for students struggling to read.

"We passed reforms to Read to Achieve written in collaboration with Governor Cooper’s own administration," Berger's spokesman Pat Ryan said in a statement. "Those reforms passed the Senate unanimously, Gov. Cooper’s administration joined us at the press conference announcing the bill, and then Gov. Cooper vetoed it."

In his veto message, Cooper said "evaluations show that Read to Achieve is ineffective and costly" and the legislation "tries to put a Band-Aid on a program where implementation has clearly failed."