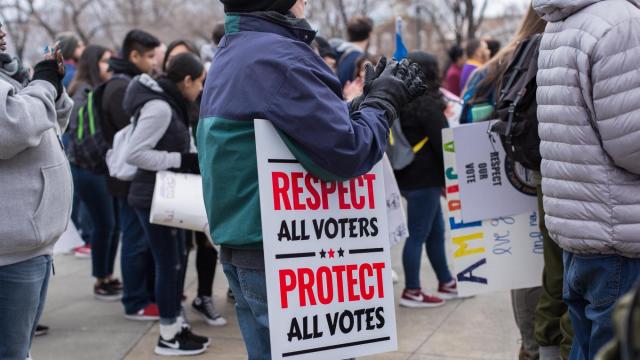 In 2013, the United States Supreme Court reduced some protections of the Voting Rights Act. Since then, legislatures in states formerly covered under the act have moved to add new restrictions to accessing the ballot, including laws that require voters to show photo identification at the polls.

While North Carolina was previously included in this list, in December 2019, a federal court granted an injunction that temporarily suspended the I.D. requirement based on a finding that it was likely enacted with an intent to discriminate based on race.

The legal team who won that injunction includes the attorneys at Forward Justice. Forward Justice is a law, policy and strategy center located in Durham that is working to secure voting rights for citizens in the south who are most vulnerable to voter suppression such as formerly incarcerated individuals, minorities, and those experiencing poverty.

"Through a combination of supporting litigation, community outreach and public education, Forward Justice hopes to expand the 'We' in 'We the people' to help create a democracy that's truly representative of all North Carolinians," said Kat Roblez, a staff attorney with Forward Justice.

In addition to challenging three election-related laws in court, Forward Justice is ramping up voter education and community engagement efforts in preparation for the November election. Their voter outreach strategy varies from most organizations in that their outreach is targeted to connect with low-propensity voters, particularly those who may have been disenfranchised in the past.

This outreach is a part of the Unlock Our Vote campaign Forward Justice launched in partnership with leading civil rights organizations in the state, including members of the Second Chance Alliance and the N.C. NAACP. The campaign aims to restore the right to vote to nearly 60,000 people previously convicted of felonies.

Additionally, Unlock Our Vote engages the community through targeted outreach, and leads voter education and registration efforts to put the power of the vote back into the hands of communities who have suffered from contact with the criminal justice system.

Since 1997, 23 states have moved toward restoring the voting rights of individuals who have been convicted of felonies, according to an amicus brief filed in the lawsuit put forth by Forward Justice. The brief notes the District of Columbia and 17 other states automatically restore the voting rights of people formerly convicted of a felony upon release from incarceration.

Forward Justice hopes North Carolina will join the ranks of these other states.

"We want free and fair elections in North Carolina. We want everyone to have an equal voice in choosing their elected representatives. Upholding existing felony disenfranchisement laws results in the denial of the right to vote for many North Carolinians and specifically, impacts the voting power of African Americans because in North Carolina people of color are disproportionately disenfranchised under the current law," Roblez said.

Henry Harrison is an individual plaintiff in the lawsuit, which challenges the state's existing law that requires citizens complete all requirements of their probation, parole or post-release supervision, including payment of fines or fees, before their voting rights can be restored.

In 2019, Harrison was convicted of a felony for which he served eight months in prison.

Upon his release, he was unable to vote due to the rules mandated by his 9-month post-release supervision period. At the same time, his convictions made it harder for him to obtain employment and housing. Harrison has experienced his probation being extended in the past due to an inability to pay his associated court costs, fines and fees, therefore extending the period of time that he was unable to vote.

Harrison has since found help through Leading Into New Communities, Inc., a 501(c)(3) non-profit organization in Wilmington that provides transitional living and case management services to meet the immediate needs of people returning from prison.

Harrison said there are a lot of issues he wants legislators to address when it comes to the government taking an active role in helping formerly incarcerated individuals have the best chance of success after returning home.

"Being a felon in the state of North Carolina, it seems like you are shunned upon. It's like nobody wants to give you a good job or a chance," he said. "The first thing they ask on job applications is if you've ever been convicted of a felony. I would just like this stigma removed to give a person a chance."

"I accept what I did now and I moved on. Things are a whole lot better in my life now," Harrison continued. "When they gave me my release papers to sign, they also had in there that I could register to vote again. At one time I didn't think that it really mattered to vote, since I've been on probation and parole like 90 percent of my life. But now, as I sit back and ponder on it, I'm like, 'Wow, it really does make a difference.' Every vote matters. It might not be the outcome you want, but you can say you played a part in it."