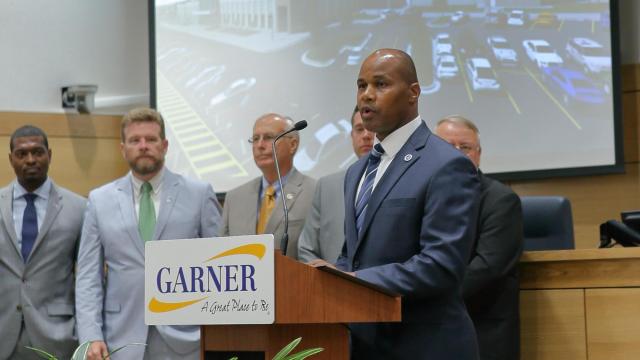 The town's strategic downtown revitalization efforts (including a soon-to-open, state-of-the-art recreation center on Main Street), a focus on both local entrepreneurship and major business recruitment, and a new high school and elementary school are evidence of Garner's growth and transformation.

This All-America City is ready for its next chapter; but, like the saying goes, it takes a village.

Garner has experienced its fair share of trials and triumphs. After the ConAgra Foods plant explosion in 2009, the community was left reeling. In a place as tight-knit as Garner, friends and family members had to deal with the physical and emotional scars of that tragedy. In addition, the town had to decide what to do with an empty 425,000-square-foot space that a major local employer once occupied.

"The town decided to set up the Garner Economic Development Corporation, a nonprofit organization designed to be an entity that would receive the property and be responsible for finding a replacement to occupy the site," said Ken Marshburn, mayor of Garner and chair of the GEDC.

ConAgra donated the building and surrounding acreage to the GEDC.

"ConAgra was also good enough to give us $2.5 million to put toward the construction of an indoor recreation facility," Marshburn said. "In addition, they gave us a half million dollars to form the GEDC to assist with marketing purposes."

The town saw the vacant site as an opportunity for change and growth in Garner, and wanted to recruit a company that could provide both stable jobs and other long-term economic benefits.

"Our focus from the outset was to think of bringing a new industry to the site. We were looking into doing several things," Marshburn said. "First of all, we wanted to be able to bring something there that would replace the tax base. ConAgra had an approximate $55 million tax base, and at the time they closed, it had something like 400 employees."

He added, "We felt like we needed to find something that would employ at least that number of people or more. And, of course, as part of that, we certainly wanted to find an entity that would pay good wages and add to our economic base and status here."

After taking an in-depth look at the site, engaging citizens in the process and conducting a study of due diligence and performing a SWOT (Strengths, Weaknesses, Opportunities and Threats) analysis, it was determined the building should be demolished and recruitment of a new company should commence.

"Over the course of several years, a number of companies expressed some interest in the site, but we never did pin anything down prior to Amazon, which seemed to fit the bill," Marshburn said.

After marketing the site for more than eight years, the town and the GEDC reached an agreement with Amazon to build a 2.6-million-square-foot fulfillment center ($200 million investment) with the promise of 1,500 jobs with a minimum $15 per hour pay rate. The building will become operational later in the year.

"We feel like we met our initial goals and exceeded them, which is a pretty exciting thing to happen. It took a lot of time and a lot of meetings," said Marshburn, who gives credit to the GEDC board, his former colleagues, the previous GEDC chair, Bruce Andrews, and town Economic Development Director Joe Stallings.

Now that the GEDC's first mission has been accomplished, the nonprofit is embarking upon its next one: helping the town implement a multi-point approach to economic development.

"We believed the corporation could still do things that are worthwhile. We expect to be an active participant in achieving what the Town of Garner wants through real estate development, redevelopment and support for entrepreneurial and small business efforts," Marshburn said. "We think [our new mission] will provide greater flexibility to effect some positive change in the community and will help us bring even more diversity to our economic base."

"Because of the sale of the ConAgra property to Amazon, the GEDC is currently looking for new opportunities to invest back into Garner and to continue to develop new sites that will allow the town to continue to recruit companies to the area," Stallings said. "The GEDC has gone from a singular-focused organization that was initially primarily concerned with the redevelopment of the ConAgra site to a much broader economic development nonprofit. One of the initiatives will be developing new sites and looking for new real estate opportunities."

Another initiative of GEDC will be supporting small business and entrepreneurship efforts. One way it's doing this is by getting in front of aspiring entrepreneurs — high school students.

The town recently launched the Garner Entrepreneurs of Tomorrow program, which is funded by the GEDC.

High school students from both South Garner High and Garner Magnet High who are enrolled in GET undergo an educational program where a local tech company CEO teaches the students once a week for four weeks. Under the CEO's tutelage, students develop a business plan and pitch it to a panel. The top three students from each school receive a prize for participating. Additional high school programs include the Garner Leadership Academy, and Lunch and Learn programs.

"Both of these programs are also financially supported through the GEDC and allow professionals to come in to meet and have lunch with students and talk about everything from nursing to IT and everything in between," Stallings said. "Leadership Academy welcomes 14 students from each high school to participate in off-campus learning activities focused on leadership development."

GEDC is embarking on a new path, while not pivoting too far from its original reason for being — to help Garner become the place it's meant to be.

"We have seen other municipalities in Wake County that are growing, and some of that growth has not taken place as much here. With a number of people moving to the area every day, we just feel like we need to be in the game all the way," Marshburn said. "Growth is both a good thing and a challenge. As the new mayor, it's certainly my view that we want to maintain the great quality of life that we have here. Moving forward, we'll be competing with other municipalities in the Triangle to show folks that Garner is a great place to be. We want to do whatever we can to ensure that people know that."

"Through our economic development efforts, we have been able to ensure that Garner is a community for all people, regardless of their socioeconomic status. And that the rising tide truly does raise all ships," Stallings added. "With our economic development strategy and partnership with the GEDC, we have ensured that we are building a stronger economy for our citizens here — from the ground up with our small business and workforce development efforts of local high schools, but also from the outside in."

This article was written for our sponsor, the Town of Garner. To learn more about the Garner Economic Development Corporation, visit ChooseGarnerNC.com.