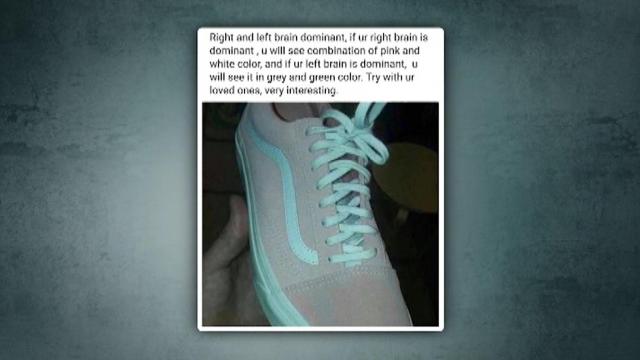 The debate about the color of a pair of sneakers is back after two stars posted the image on Instagram asking for their fans' responses.

"I saw this image online and I showed it to a bunch of people and it's really, really spectacular, what comes back," Will Smith said in a video this week. "What color do you see? Now show ... whoever is around you ... and ask them what color do they see and I think you'll be surprised at what the answer is."

"There's no right answer but it's definitely not pink," he says.

In another video, he's seen arguing that the shoe is green and gray. Others in his group say they see pink and white.

Singer Lizzo was apparently having the same dispute.

"I see grey & teal but my whole team sees pink & white help," she posted on Instagram.

A woman in the United Kingdom posted the image of the shoes to a Facebook group in 2017, insisting they were pink and white.

The famous shoe color debate was one of two optical illusions that took over the web in the past years, pinning friends and families against each other over the difference in the colors they perceived.

One eye expert said it all has to do with how we each perceive lights and colors depending on our genes.

"It has to do with the tiny cones in the back of our eyeballs that perceive colors in a slightly different way depending upon our genes," CNN's Senior Medical Correspondent Elizabeth Cohen explained during the infamous dress debate.

The woman who first posted the shoes on Twitter said they were actually pink and white. 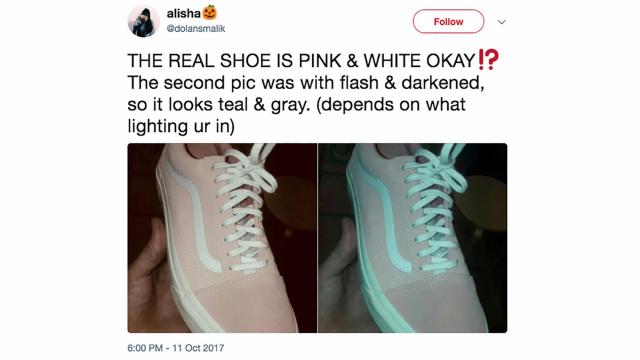 The whole thing started when her friend's mom saw the photo of the shoes and said there was a blue hue, the woman had told Metro UK two years ago.

A Twitter user tried to clarify things by saying the darkness of the woman's original photo skewed the colors and posted a second photo with less contrast. That didn't help at all. The photo circulated and had the internet world divided and confused.

So there you have it: biology, contrast and badly taken photos.