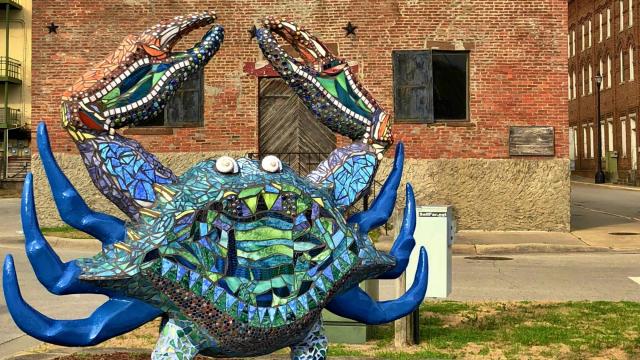 In 1913 the New Theatre opened in downtown Washington, NC. The invention of noisy cars and lack of air conditioning closed the theater in the late 1920s, in sync with the end of the Vaudeville era across the nation. But the show went on in Washington, with the addition of a palace-style theater on the back of the closed vaudeville stage in what is today the Historic Turnage Theatre.

The theater has had many seasons and a few closures – the latest time being in 1978 when the building went into foreclosure.

Locals formed the Turnage Theaters Foundation and raised over $4 million dollars to bring the abandoned building back to life. Unfortunately the economy couldn’t support small-town theaters in the early 2000s, and the building closed again.

In 2013, the Arts of the Pamlico (AOP, previously the Beaufort County Arts Council) purchased the building and launched a renaissance of arts and culture in the 432-seat community jewel.

"The Historic Turnage Theatre is the centerpiece of the arts community in Washington, which is a hub for the arts in eastern North Carolina," said Debra Torrence, executive director of the Arts of the Pamlico.

UPDATES TO THE TURNAGE THEATRE

The theater was restored in 2013 and since then, several additional updates have been made. Most recently, the roof of the New Theatre had to be completely replaced as the 1900s roof structure was at the end of its life. The money for the repairs was gathered through a combination of community donations, local, state and federal support and private foundation grants.

For Torrence, the repairs wouldn’t have been possible without the support of the Washington community.

"As we were working on securing needed funding, the decay accelerated. We were having water running down the plaster walls, ruining ceiling tiles and damaging flooring. The original estimates were about half what we had to raise, but as old buildings will do, they give you surprises on a regular basis. The trusses and structure were beyond repair and a crane was needed to take out and bring in the huge structural pieces. With the help of so many, we raised $1.4 million and were able to preserve the building for decades to come. We replaced the roof with steel which was the least expensive option," said Torrence. "There were hundreds of people that were involved in this. There were people giving $5 donations, people telling friends of friends about it, foundations and government entities all willing to help save this historic gem — it was all very organic and was supported first from the community we serve."

Moving forward, the organization will begin restoring the vaudeville stage, proscenium, windows and masonry to build resilience and the future performance space in the mothballed theater.

WHAT DOES THE TURNAGE THEATRE OFFER?

The theater offers a variety of programs ranging from monthly art exhibits, live music, comedy, theater performances to arts camps for youth, as well as movies, a museum and outdoor festivals.

The Arts of the Pamlico has re-imagined the Historic Turnage Theatre, turning it into more than just a stage. It is a community hub for all kinds of arts activities and events.

The auditorium hosts live theatrical performances and music events – both acoustic and amplified – from rock and jazz bands to choral and orchestral societies.

Additionally, there is community theater for adults and youth offered by AOP’s Community Players and Bubblegum Theatre for Youth and two podcasts open to audiences beginning in October 2021.

"We wanted to have things for people to look at when they came in or during intermission. Since I am a semi-retired costume designer, I have been collecting vintage clothes and costumes for 40 some odd years now, so we transformed a long hallway of the theater into a museum," said Jeff Phipps, artistic director for Arts of the Pamlico/Turnage Theatre and an associate professor at Eastern Carolina University.

The museum’s collection includes historic artifacts, tidbits from famous people who spent time in Washington and costumes used in films and productions. This includes a dress that was worn by Norma Shearer in "Idiot’s Delight," a costume that was worn by a dancing extra in "Inkheart," a tunic designed by Edith Head for "If I Were King" and a copy of a vaudeville costume that might've been worn in the original Turnage Theatre, among other things.

"I've gotten wonderful comments and people asking what the next exhibit will be and when it’s going to happen. The fact that people are interested is what spurs me to bring in more items for the exhibits," said Phipps. "One of the things that attracted me to Washington in the first place was how diverse and culturally aware this little community is — it encourages me that people will continue to support us."

With the help of donations, the theater was able to convert an old office into a sound studio. Using the space and sound equipment, the theater has launched a podcast covering the arts community in Washington.

The podcast, called "BoCo Town" from Arts of the Pamlico at the Turnage Theatre, features interviews, news and updates about the local arts scene.

Another podcast presented by the theater, "Washington City Limits" from the Historic Turnage Theatre, features local musician Chuck Phillips interviewing other locally-based musicians. The show also features live performances from the musicians — which Torrence plans to open to live theater audiences in the fall.

The arts are an important part of Washington's tourism. It brings people to the community and encourages contributions to the economy, from buying local art to staying in local hotels and B&Bs, to eating at local restaurants.

More than $2.1 billion is generated by the nonprofit arts and culture sector in North Carolina in direct economic activity, with over $200 million in revenue for state and local governments. Beaufort County's arts alone contribute $14 million to the economy as well as 440 jobs annually.

"Wherever there's art, there are people coming to see the art. And this is a thriving community, from the art standpoint," said Art Tyndall, a local painter with a studio in downtown Little Washington.

This is an important characteristic as businesses look to relocate to towns that center around creativity. Communities that already have impactful arts cultures are attractive for companies, residents and visitors.

"We are a very welcoming community with a diverse array of art and cultural opportunities across Beaufort County and in downtown Washington," said Torrence.

With the new addition in 2020 of an onsite bakery, more youth art programs, growing opportunities for youth and adults, and adult dances thanks to the recent donation of a large dance floor in the Turnage Gallery from US Dance Chapter 5046, the Historic Turnage Theatre continues to expand its offerings.

The art council's focus on ensuring the arts continue to thrive has helped to build not only a strong arts community in Washington, but a community that contributes to the economic development of eastern North Carolina in lasting, creative ways.

This little haven along the Pamlico River is unique in many ways that have made it a flourishing arts community — where there is beauty, there is inspiration.

"The natural beauty, the waterways, innovative entrepreneurs, the delicious array of food, the large boating industry," said Torrence. "Plus the proximity to New Bern and Greenville creates this arts triangle where everyone is celebrating the history and the arts of the area collectively."