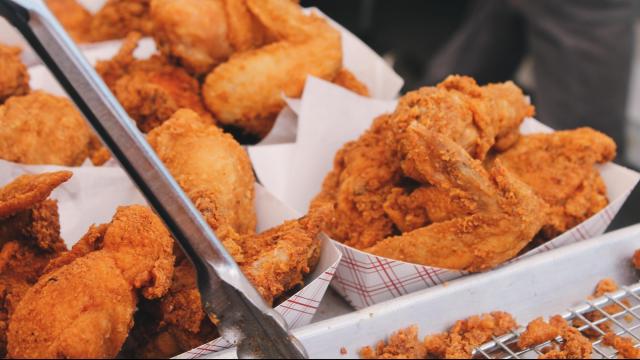 If you're looking for a good place to eat right off of Route 17 near Washington, N.C., think before you stop at the local Sheetz, Subway, McDonald's or Zaxby's. While all of these options are quick and easy, if you drive a little further into town you'll find an old-fashioned drive-in with low prices, a local following and if Yelp reviews are to be believed, "the best fried chicken ever."

"Our tagline is southern soul," said King Chicken owner Zack Mixon. "That's the food we provide. We offer a lot of food from ice cream to collard greens."

Other King Chicken menu items include hushpuppies, chicken salad, yams, stew beef and okra. One Google reviewer said the waffle she ordered with her chicken was "literally the best waffle that I have ever eaten" and the chicken was cooked perfectly.

Mixon purchased King Chicken in 2018, knowingly taking on the monumental task of operating a legendary restaurant that's been around for 60 years. The cooks have been perfecting recipes for decades, and the restaurant's cult following is a testament to them getting the ingredients just right.

When asked what his philosophy was regarding the challenge of inheriting such an important local landmark, Mixon's answer was quick and to the point.

"It's pretty simple – don't change a thing," he said. "We've been operating smoothly for 60 years now. People like old-fashioned things nowadays – from the staff to the food, the people come here for that."

It's a mantra that rings true for most of Little Washington's food scene. King Chicken may be the longest standing restaurant in town, but others like Bill's Hot Dogs off of Main Street also come highly recommended.

At the end of the day, the restaurants in Washington are looking to scratch that "I want a home-cooked meal" itch.

"Being local to the area, we felt that Washington needed more of a casual dining experience than a fine dining experience," said Glenn Wetherington, owner of Down on Mainstreet. "I would call it southern comfort."

Glenn and his wife, Gennia, opened Down on Mainstreet with a passion for entertaining. Local to the area, they've seen downtown Washington grow and change, and contribute to the growing food scene there. Serving up a menu full of Americana, diners at Down on Mainstreet enjoy everything from shrimp and grits to fried frog legs.

With a location right near the water, there's a natural focus on seafood.

"We try to focus on saltwater fish, mahi, shrimp. And we're in the south, so we're definitely known for fried seafood," Wetherington said. "We offer a very diverse menu setup. None of our stuff comes frozen or fried. The ingredients we use – it's that kind of difference."

For owner Todd Rodzen, the food scene in Washington is about more than just food — it’s also about creating a community gathering space. At Captain Cook’s, the restaurant regularly hosts events like weekly cornhole and birthday bashes, as well as spotlighting some of their most loyal customers.

"Along with the great food we offer, we strive for great service to show people a good time. We often have events, birthday parties, karaoke, open mic nights and a varying range of live music with the best Waterfront location in Washington," said Rodzen. "We have lots of great local support that makes all that possible."

Aside from the restaurants, the waterfront itself is an attraction in its own right. The residents and business owners take pride in the unobstructed waterfront views that attract travelers from all around.

"We have a ton of customers from Greenville. They come out here, come out to eat and get ice cream, and walk the waterfront and relax," said Wetherington. "You can travel here by boat. They'll tie up, eat and shop in the shops."

The slower pace is also something that residents and business owners are proud of. At just a 30-minute drive from Greenville and a less than two hour drive from downtown Raleigh, Little Washington serves as a respite from the hustle and bustle of the city.

The peace and quiet, combined with the plethora of food options makes it a regular weekend destination for visitors that are in the know. As the foodie craze continues to grow, it's inevitable more people will discover Washington's unique draw for southern hungry palettes.

"I think more people now are more apt to try a mom-and-pop type place than they were," said Wetherington. "Throughout the whole downtown Washington area there are very few chains. A lot of places are independently owned."

One of the new independently owned editions to Downtown Washington, The Mulberry House Brewery, is housed in the historic Fowle building and brings upscale dining and nightlife to the city.

"We’re pretty much as farm-to-table as you can get. We do international cuisine, pulling elements from all around Europe, Northern Africa, South America and Asia, but it's still all produce, food and meats that are local to this area — it’s showcasing the bounty of the locale while also bringing the town a bit of culinary variety," said Daniel Beedle, director of operations and general manager at The Mulberry House Brewery. "We're also trying to curate the largest wine list in the city, but we're doing it at pretty much retail price and working with a top sommelier. We’re also working on developing cocktails and hopefully creating a nightlife scene."

For Beedle, Washington is in the midst of a cultural renaissance — and the culinary scene is helping lead the charge. While the Main Street food culture has died an unceremonious death by being replaced with strip malls and fast food chains in many towns across America, in Washington, the Main Street is alive and well.

Residents and visitors get to experience a flourish that's lacking in the sterile dining areas of chain restaurants, and it's something that business owners have picked up on.

"Beaufort County is unique," said Mixon. "Washington in general is a special place – the way that it's situated right on the river. I've been here my whole life and seeing the changes in the last eight to 10 years is remarkable. It's just a special place."