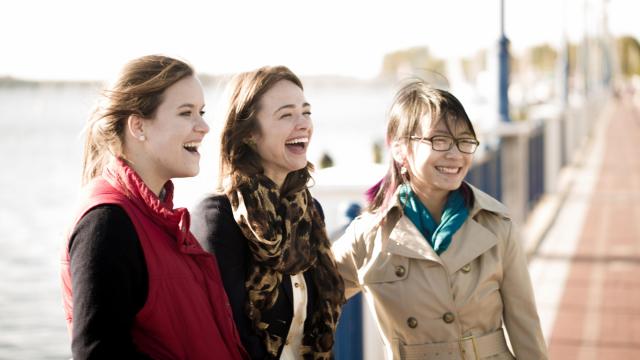 It's a common dilemma on every trip or vacation: how do you please everyone? Combine various age groups and interests, and there's always the near-impossible challenge of finding a crowd-pleasing attraction or activity.

Barbara Marshall has tackled that challenge for decades. Marshall's family's roots have been firmly planted in Washington for centuries, and for the past 36 years, the town has been the site of their annual family reunion. Family members who once called Washington home travel from all over the country, from New York to California, to spend a long weekend in town.

For Marshall, the attractions of Washington have made it easy to keep everyone occupied, whether she's entertaining 20 people or 200.

"If there's anything to do in Washington, we have probably done it," Marshall said. "For those coming in, Washington reminds them of the past, and that's what we hope to do. It's easy living. Most of the time, they're coming from New York, New Jersey, and all those places, and we want to show them something different — a different way of living. Everyone has enjoyed coming here, especially the young folks, because they get to run wild. Where they're coming from, usually they are trapped in, but here they can run wild without their parents getting worried."

Marshall's family reunion isn't the only multi-generational gathering in Washington and coming home seems to be a theme for both.

For the past 19 years, alumni of the town's old P.S. Jones High School have returned to their old stomping grounds around the streets of Washington for their biennial reunion, and for them, returning home means revisiting favorite local haunts.

"Before you even go to see your family, it's Bill's Hot Dogs and King Chicken. Those are the famous places that people still look forward to," said Joyce Moore, long-time organizer of the P.S. Jones High School reunion. "People are always excited to come back home to see their families and their friends. They get together and have cookouts, and picnics and dances. There's something special about being able to come home and visit the old sites that we used when we were growing up."

As interests change over the years and old haunts close down, it becomes more of a challenge to find fresh ways to entertain crowds. In fact, although the waterfront — one of the biggest draws of Washington — is now a popular site for the P.S. Jones reunions, Moore fondly remembers the days when that space was a swimming hole for her and her classmates. Although they can no longer lounge on the sands of the beach, the alumni have come to love the tranquil scenery and new sites afforded by the waterfront walk.

"Now, everybody looks forward to coming home because we have the waterfront, and it's the one of the one things you can do at any age," Moore said. "Anybody can go walk, sit, lounge on the ground and have a picnic. There's an accessible park right there, and a variety of wonderful restaurants right downtown in the local area where the waterfront winds. You can go get a couple of Bill's hot dogs and sit down, or sometimes they have music and entertainment right on the waterfront."

From the restaurants and shops to the parks and green space, the waterfront keeps crowds entertained for hours, but there's more to the river than just the attractions on land.

Marshall's family had been enjoying the sites on the shoreline for years. But at one of their latest reunions, she decided to give them a new perspective on the waterfront. In one of her most memorable family reunion moments, Marshall capitalized on the opportunity of the waterfront and rented out the Belle of Washington for a cruise around the river.

Unfortunately for her, there also happened to be a hurricane in the forecast.

"We couldn't go out. The boat didn't even end up leaving the dock because of the hurricane. But we had the greatest time just being together, laughing and carrying on, and the crew was excellent," Marshall said. "They felt bad, because we had paid for a spin around the water and we couldn't go anywhere. But we understood, and it turned out to be nice. We were able to stay on the ship, enjoy ourselves, dance and spend time together. We thought it was going to turn into a catastrophe, but it was the opposite."

Aside from the waterfront, Marshall and her family typically fill their days in Washington with trips to the skating rink across the river in Chocowinity, visits to the estuarium environmental center and pick-up games at the recreation center. The family also rents out several venues around town, including the Civic Center and St. Clair Ranch, the latter of which boasts horses, dirtbikes, yard games and a swimming pool.

Of course, when you've been frequenting the town for decades, new entertainment sometimes demands creativity. For Moore and the alumni of P.S. Jones, that means organizing town-wide celebrations of their own. For years now, the group has thrown a parade during its reunion weekend, and it's quickly become the talk of the town.

"We recently had our first parade in many, many years. We stuck with mostly local people to bring out the old cars and different things and have a smaller parade," Moore said. "But in 2019, we were more than blessed to have the Elizabeth City State University Marching Band come. We have had nothing but praises for that, because it had been at least 50 years since we had a live marching band. That brought people in from everywhere, and everybody was just so excited about the whole thing."

For Marshall, Moore and their respective groups, Washington is and always will be home, but that's not the only reason they choose to continue gathering here year after year. For many, it's a much-needed change of pace; a retreat they eagerly anticipate time and time again.

"People love being able to walk around and get that southern hospitality," Moore said. "You've got the dog parks, and you've got the walking trails and the skating rinks. In the big city, you don't have all that outdoorsy accessibility. You don't have that southern hospitality where everybody's friendly — you wave to strangers, you talk to strangers. Living by the water in a town like Washington always draws people in and brings them together, even if they’re strangers."