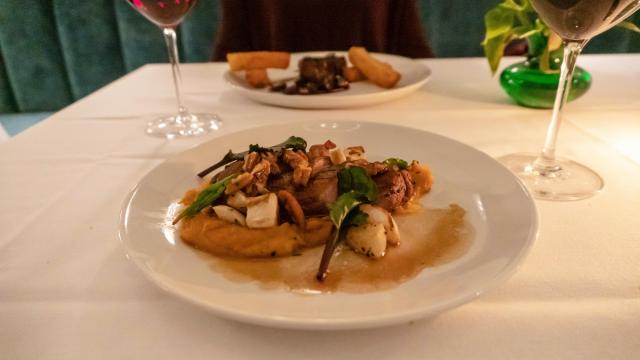 Whether you're a new business or a new developer looking to set up shop in a new location, there's a lot of pressure that comes with being the "new kid on the block."

Companies oftentimes feel a duty to bring something new to the town while still respecting what came before – all at a cost that residents can afford. In places like Washington, N.C.,which has a defined history and feel, this acknowledgement of the past and anticipation for the future is especially important.

"We've gone to great lengths to make sure the style matches," said Jim Wiley, president of Beacon Street Development Company and the man behind the waterfront neighborhood Moss Landing. "There's a lot higher bar [here] where people are scrutinizing a developer. For Washington, the excitement over additional housing and what this could mean by being one of the many avenues of downtown revitalization – I would say we were embraced more."

Its location gives Moss Landing direct access to Washington's arguably greatest resource – the waterfront – which created a great level of scrutiny among residents. But the developer succeeded in mimicking the town's established style and brought a new element of hominess to the city.

Efforts to inject new life into the city continue to bear fruit because so many of those involved with revitalization projects have some kind of connection to Washington. Wiley spent the summers of his youth in town and still has family there today, so maintaining the essence of the city was important to him.

"There's a real special element – thinking about my dad, who rode his bicycle on the same street where we're building houses today. Just the thought of the length of history that's there and how a wonderful community that was built like that lasts for generations and is treasured. It's really an honor for us to come alongside something that's great and throw our little bit in there," he said.

More people are realizing what a special place Washington is and are moving to town permanently or flocking to it for a weekend away due to its affordability and high-quality lifestyle. Washington has no doubt responded with great places to eat and fun things to do around town.

"There's kind of a lack of fine dining in the eastern part of the state," Sanders admitted. "I felt there was an opportunity. Washington is a lovely place, and there's already plenty of reason to come here. If we could put in some fine dining, it would drive traffic to the city."

A bold plan like that needed a bold location, and the old bank building was the perfect staging area for fine dining and more. Located on Main Street, the Sanders' renovated the interior of the historic building, creating a dining space with high ceilings and a distinctly elegant vibe – an example of bridging the old and the new yet again.

Today, the Hackney is a premier farm-to-table dining experience with a British twist, thanks to Nick's hometown of London. The Hackney partners with small farms close to the city to bring in seasonal ingredients and with local wine seller Wine & Words Gourmet to provide a robust wine offering.

The Hackney will also connect to the Sanders' next big venture, a gin distillery. With plans to open later this year, the distillery will offer tours, have a tasting room and, of course, sell high quality gin. The distillery and restaurant combo is a long-term bet on Washington that so far has paid off.

"I'm confident that we are not the only people that have a big vision for the city," Sanders said. "Downtown Washington is actually very beautiful. The beauty is its an hour and a half from Raleigh, it's the closest water you can get to [and] people are friendly. It's a great place to come for a day or the weekend."

It's important to note that the fine dining and fancy living in Washington is comparatively cost-effective to other waterfront towns of similar size and citizenship.